It has been several months since I last wrote a Battle Review and it is great to be back writing another one.  For this Battle Review, we will look at some of the most iconic Amiibos and see which one is the best.  While both Link Amiibos have been around for quite some time, if you only want the best looking Amiibo then this article is for you.  In this review, Hyrule’s favorite son will do battle against himself to see who truly is the best Hero of Time.

Fighters/Rarity – While the Smash Brothers Link is one of the first Amiibos released and has been around for a long time, it wasn’t until Wave 3 that we got Toon Link who was pretty sought after upon release.  While Toon Link is by no means rare, in my experience, he is slightly harder to find than the regular Link.  However, the difference is slight enough that at least in terms of rarity, these two figures are tied.

Colors – At first glance, it doesn’t seem like these figures have much of a difference colorwise.  They’re both green and carry similarly colored swords.  However, Toon Link has lighter and brighter shades of green which do stand out more than Smash Link.  Part of this is due to Smash Link coming from Twilight Princess which was a darker game.  The biggest weakness of Smash Link is that his shield colors do not pop the way they should and of course, there is the ugly “pee stand.”  Why Nintendo colored it yellow is one of the stranger decisions in Amiibo design thus far.  Despite many similarities, Toon Link takes this category easily. 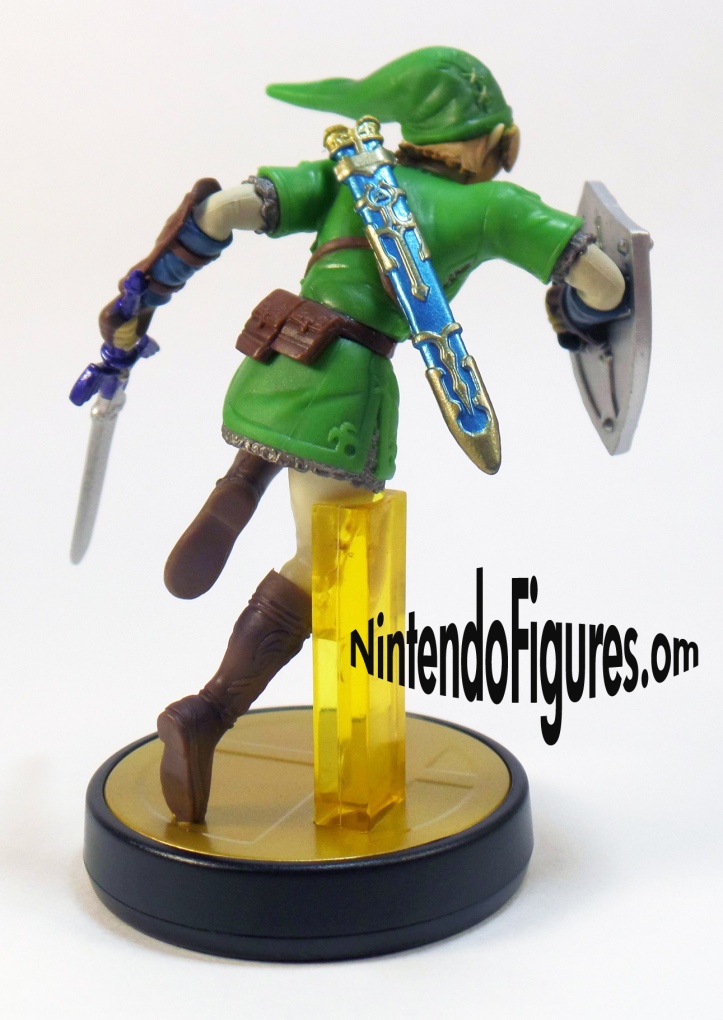 Textures – As Amiibo collectors know, textures have improved as Amiibos have been released, but surprisingly, Smash Link has pretty nice textures throughout the figure.  One example is his hair which looks better than other Amiibo released later on like Princess Zelda.  Smash Link also has excellent detail in his sword, gloves, boots, and the stitching on his hat.  These little touches definitely set Smash Link apart from many of the other early Amiibo.

Toon Link is somewhat limited as far as textures go.  He has a nice bumpy feel to his tunic which shows the fuzziness of the fabric and the raised details on his shield and sword really look great.  Outside of these small touches, Toon Link lacks detail because of his cartoonish design.  Smash Link wins this battle.

Pose – Describing the pose of these Amiibos is somewhat challenging.  Toon Link looks like he is running with his shield up and the figure has a nice sense of motion to it.  He looks guarded and a little wary as you would expect in a Zelda dungeon.  Smash link has a somewhat ridiculous pose in that he is either dodging or jumping with his shield up and his sword somewhat ready.  His face looks as if he too is determined and maybe it is just because mine is a bit cross-eyed, but something just a looks a little off.  Of course, the large stand that is in front of one of his leg detracts from the pose too.  An even bigger problem is that Smash Link is hard to actually look at head-on.  He is looking down so you almost have to be eye-level to the Amiibo to see his face/expression.  This is odd and not a problem I’ve noticed with any other Amiibo.  Perhaps I am missing something but Smash Link just doesn’t quite have as cool or logical of a pose as Toon Link.  I would even go so far as to say that Nintendo fans deserve a better Link Amiibo as far as his pose goes. As a result, Toon Link wins this category too.

The Verdict – While Smash Link has been one of the best selling Amiibo and has a little more functionality in Nintendo games, I would still give the edge to Toon Link.  He has a better overall figure and shows how Nintendo learned and improved upon early mistakes with Amiibos.  With how many games Toon Link has appeared in from Wind Waker to Spirit Tracks, he is nearly as iconic as the version in Twilight Princess now too.  If you can only choose one, Toon Link is a higher quality Amiibo so he gets the nod. Which Amiibo do you prefer and why?  Let us know in the comments section and let the debate begin!