Background – If you comb through early articles on NintendoFigures.com, you will see me say multiple times how I’m not excited about Animal Crossing Amiibos and that I won’t buy any and I am now going to eat my words because I bought my first and probably not my last Animal Crossing Amiibo.  What changed my mind (besides a hopeless addiction to Amiibos)?  I will discuss that and why I like this Amiibo more than I ever expected in this review.

Rarity – I’m happy to say that Tom Nook, who is one of the most popular characters from Animal Crossing, is also an easy to find Amiibo.  I have seen him in greater quantities than any other Animal Crossing Amiibos at retailers near me and I suspect Nintendo made him common because they knew he would be in high demand.  If you’re interested in picking up this figure, you shouldn’t have any trouble in the United States anyway.

Pose and Details – Animal Crossing is a series built on simply designed, cute characters and Tom Nook is the epitome of that.  He may be a raccoon slumlord in the games, but he is a cute one at that!  While his pose is incredibly simple and it looks like he is pointing at something, his droopy eyes and well-painted nose, still look great and capture the charm of the character.

The real highlight is Tom Nook’s sweater which has outstanding detail and texture.  From the argyle decals to the bumps and folds in the plastic which look like real clothes, I think it is some of Nintendo’s best detail work with Amiibos yet.  When I saw Tom Nook (and the other Animal Crossing Amiibos) in store, the quality just looked so good and Tom Nook is one of the few characters I think of fondly in the Animal Crossing games that I was won over and decided I wanted to own this Amiibo. 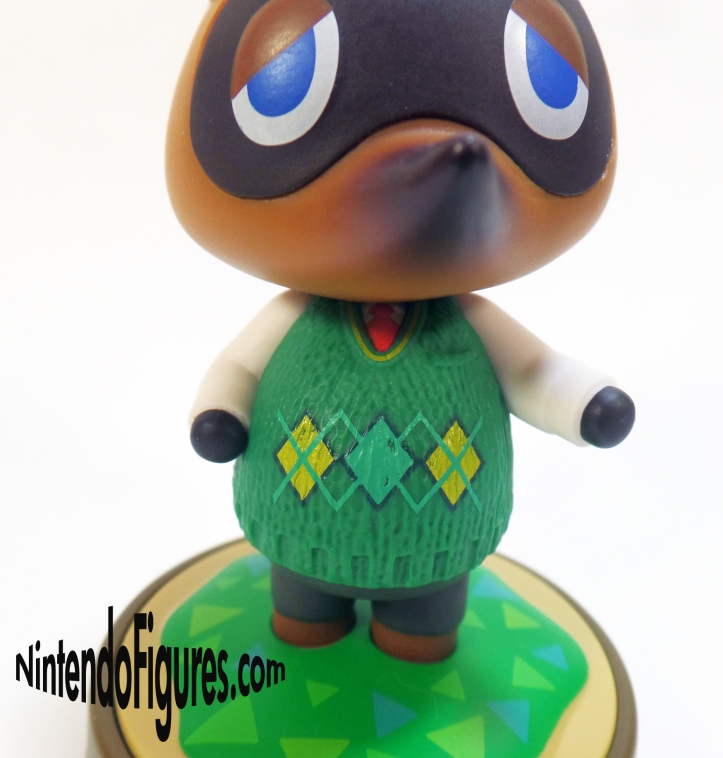 The other aspect that I really like is how his base is not only a dull, dark brown which makes it stand out from the red and black bases of other Amiibo lines, but that they came up with a new base pattern too.  While the green and blue triangles are simple, they look great and make Tom Nook and other Animal Crossing Amiibos look distinct from all of the other Amiibos that have been released.

Should I Open This Amiibo? – Overall, it is a pretty easy yes, but there is one caveat.  I think the packaging is not that eye catching and a little bland so that makes it harder to want to preserve Tom Nook in a plastic prison.  Tom Nook is very common like I previously mentioned as well.  The one thing is that Tom Nook has very low functionality in Nintendo games currently.  Unless you have Animal Crossing Amiibo Festival, the only other special functionality is that Tom Nook unlocks an 8-bit skin in Super Mario Maker.  Tom Nook does work in  Captain Toad and Hyrule Warriors, but he does the same stuff as any other Amiibo in those games.  Since Animal Crossing Amiibo Festival has proven to be a bit of a flop in the eyes of critics, the main functionality of the Amiibo may not be useful at all to many collectors.  Hopefully, Tom Nook is added to other games, particularly any Animal Crossing games that are released, but currently, this is not an Amiibo to buy expecting to use in many games.

Closing Thoughts – As you can probably tell, I really like the design of this Amiibo.  As far as other Animal Crossing Amiibos, I don’t like any of the characters that are out right now (except for maybe K.K. Slider), but I would consider buying Timmy and Tommy (who will have a nice looking Amiibo), and another character or two like Leif should Nintendo release them.  I don’t love Animal Crossing, but if the Amiibo is high enough quality or I have a little bit of fondness for the character like with Tom Nook, I will definitely purchase it and review it here on NintendoFigures.  Which Animal Crossing Amiibos do you have so far?  Which of the Animal Crossing Amiibos are your favorite?  Let us know in the comments section below!