It has been a while since we have had a themed week here at Nintendo Figures and I think it is time to bring it back.  This week I want to highlight a few of the retro characters that are represented in figure form.  Dr. Mario is a great place to start because Mario is always popular with Nintendo fans and Dr. Mario has become a bit of an obscure character and franchise.  When Dr. Mario first came out, Tetris and Tetris clones were all the rage.  I was pretty young when I got Dr. Mario on Game Boy and was too young to know that Tetris and puzzle games like that don’t hold much appeal to me.  And yet, I still find Dr. Mario both nostalgic and to be a cool version of Mario.  Let’s take a look at the Amiibo to see how well it represents this classic character.

Rarity – Despite the character’s obscurity/old age, Dr. Mario is still Mario and I believe that is why Nintendo made this the most common release in Wave 5.  With the exception of Gold Mario who has been pretty rare, most Mario Amiibos have been either common or semi-common and Dr. Mario is definitely on the common side despite being a Target exclusive.  I did some searching to write this review and you can easily get Dr. Mario off of Ebay and I even saw several that went way under the retail price which is great news if you’d like to pick him up. 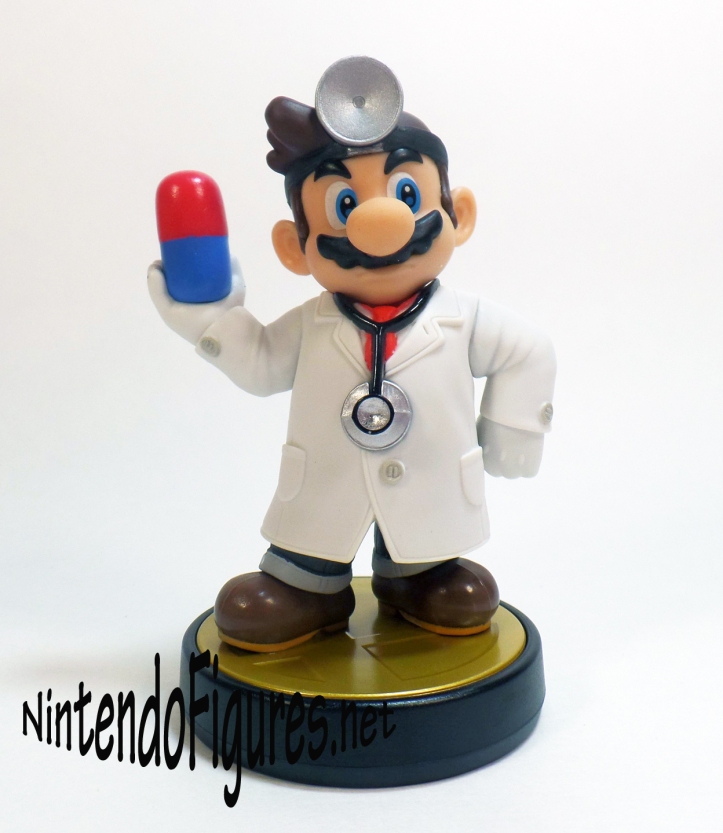 Pose – One thing that really makes Dr. Mario stand out is his pose and expression.  Look at how confident and angry he looks!  It is very un-Mario like to see him look this serious, but it does fit Super Smash Bros. well.  While the pose is simple, I’m glad Nintendo has him holding a pill since they are the main fixture of the Dr. Mario games.  One potential downside is that Dr. Mario does not look good from behind or from the side.  It doesn’t help that neither of these angles reveal many details of the figure either.  Overall, I like that this figure of Mario is a bit different from the others and I think that helps make him worth owning.

Details – While the figure is simple because Mario is wearing a large lab coat, Nintendo still sculpted some nice details like the buttons and collar of the coat.  The stethoscope also has a really nice metallic paint and looks like the real thing.  One other nice touch is that you can see Mario’s pants peaking out underneath the coat too.  While the character design is simple, Nintendo did a nice job representing Dr. Mario. 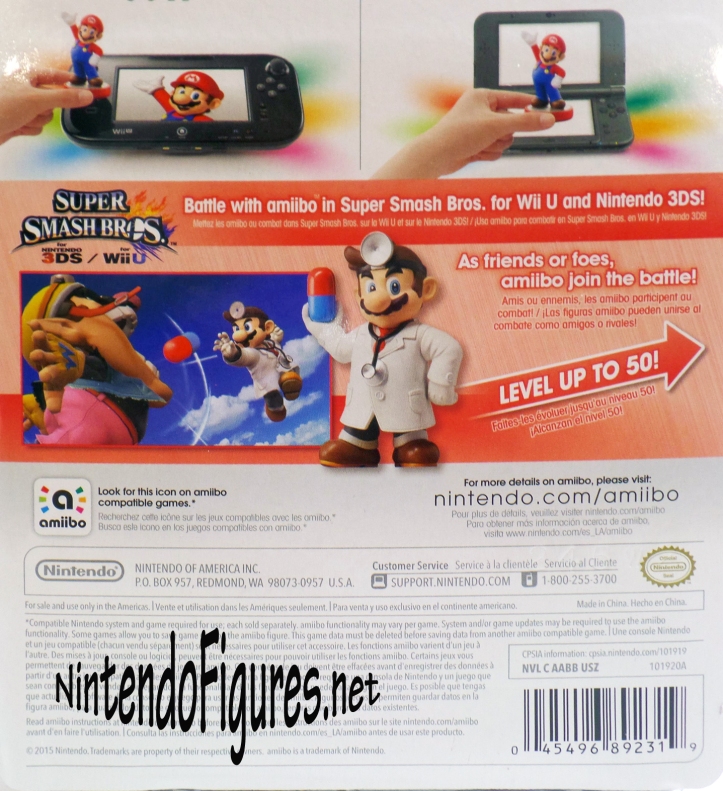 Functionality – Unlike other versions of Mario, Dr. Mario has a little more limited compatibility with Nintendo games.  He works in Super Smash Bros., Super Mario Maker, and Yoshi’s Woolly World, but beyond that, the other games Dr. Mario works in are basically the same as any other Amiibo including Captain Toad, Mario Party 10, and Hyrule Warriors.  This means Dr. Mario could stay in the packaging if you want, but I chose to open mine because I don’t have room to keep all of the common Amiibos in box.  Also, I don’t think the front of the packaging looks as nice as other Amiibos even if I love the screenshot from Super Smash Bros. on the back.

Closing Thoughts – Dr. Mario is not one of the best or most interesting Amiibos, but he is great for those of us who remember Dr. Mario or are just fans of Mario in general.  I like the detail on the figure and one thing that surprised me is that Dr. Mario is actually bigger than the regular Super Smash Brothers Mario.  This probably is representative of the fact that Nintendo has slowly but surely increased the size of Amiibos over time and perhaps we get slightly more detailed figures as a result.  Regardless of that, this was a fun Amiibo to review and he looks great near other Nintendo characters if you want to display him as I found in the picture above.  I hope you enjoyed this review and with his low price, I prescribe Dr. Mario to all Nintendo collectors!