As I wait for the new Kirby Amiibo (and am unable to find any of the new World of Nintendo figures in stores near me), I thought I would review some more non-Nintendo figures I have purchased recently.  Figure collecting has started to extend beyond Nintendo for me because of the lull and because I discovered a line of Star Wars figures that relatively affordable and are high quality.  Even if you aren’t a fan of Star Wars, I think you’ll find this review interesting because you can compare it to what we get with Nintendo figures.

The Basics – S.H. Figuarts (which are part of Bandai) have been making 6″ Inch Star Wars figures for a little over a year now and have quite an eclectic range of releases from Darth Vader and Luke Skywalker to Captain Phasma and Kylo Ren.  They are known for their Dragonball Z figures and for making high quality 6″ Inch scale figures.  Mostly due to price, I ended up picking up Obi-Wan Kenobi because he was one of the most inexpensive at the time and I wanted to see how cool these figures were.  The retail price for this figures should be between $50-$60, but the price varies wildly because these figures are made in Japan and have to be imported to the United States because Bandai does not have a license to distribute them here in America.  That does make the price higher than if you bought it directly in Japan, but ultimately there are many reasons why this figure is worth the price.  If you’re interested, these figures can be found on Amazon, AmiAmi.com, hlj.com, and others.  They are selling well and the price and availability does change quite rapidly so keep that in mind too.

Packaging – As I have said several times on this site, I do appreciate packaging, but only a few styles of figures I’ve reviewed have really wowed me.  S.H. Figuarts has done this in both design and size of the box.  The box is a simple, but crisp design.  The back has some really nice pictures of the figure and gets you excited to open it and mess around with the figure.  The metallic trim on the box looks really nice and fits Star Wars well.  What I also love is how small the box is.  Bandai have designed something that is very efficient and does not take up any extra space which any collector can appreciate.  Overall, this is excellent packaging and I hope more companies will be so efficient in how they package the figures. 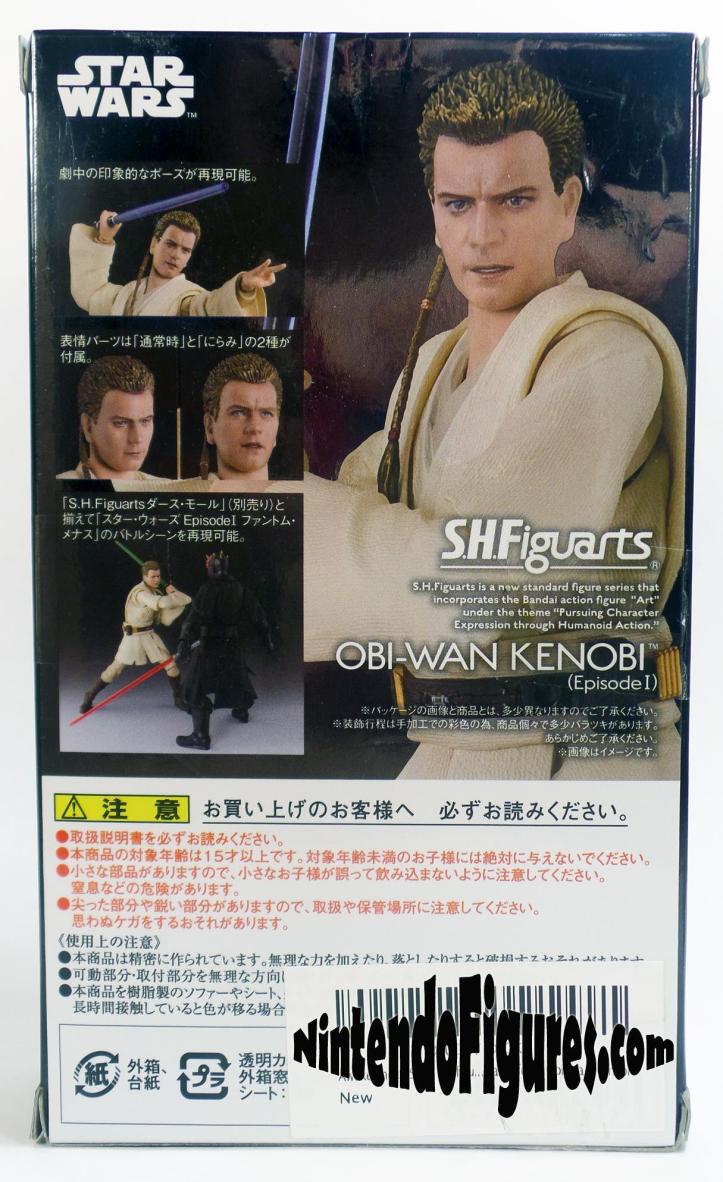 Accessories – To understand why this figure is worth owning, seeing the accessories is key.  You get much more stuff than your standard Hasbro Star Wars figure you see on the shelves of toy and grocery stores.  Obi-Wan comes with two swappable heads.  Both are serious expressions, but one has Obi-Wan’s mouth open to show him exerting himself like in a lightsaber battle.  While the faces are perhaps too similar (Obi-Wan is serious more often than not), the two faces help you capture the mood or intensity of Obi-Wan’s pose well. 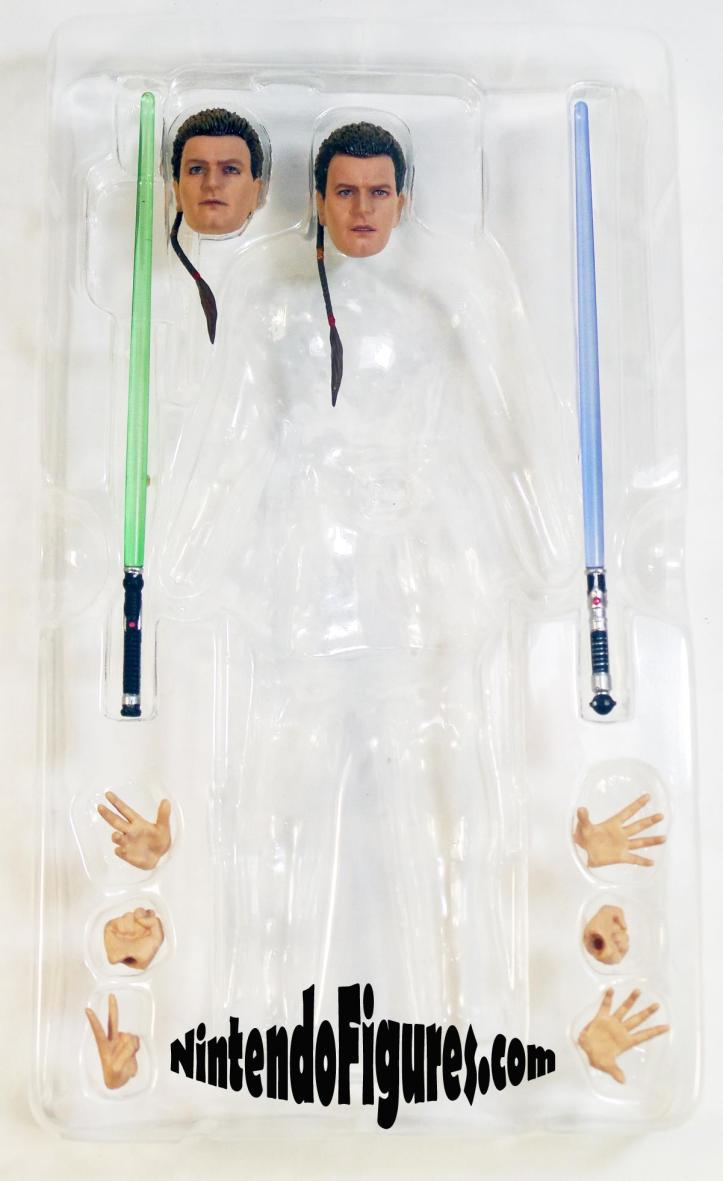 Obi-Wan also comes with swappable hands.  If you’ve bought many high end figures, you’ll know how great these are.  Obi-Wan has a pair of gripping hands for holding the lightsaber(s), a pair of open hands which can indicate he’s using the force, and a pair of force hands including the peace sign!  As funny as the peace sign hand is, Obi-Wan actually did use this in Episode One during the fight with Darth Maul.  All of these hands pop on and off a ball peg that is on each hand.  Most of these are really easy to put on take off, but the gripping hands caused me all kinds of problems.  More on that later.

Paint and Details – One of the things that makes this figure so exciting is the new technology used to capture an actor’s likeness in a way that has not been seen at this size before.  There are figures that are roughly a foot tall that have an incredible likeness to their actor/movie counterparts (Hot Toys and Sideshow Collectibles), but most 6″ inch figures do not look so great.  Hasbro’s Star Wars Black Series is a great example of this.  Figures like the Poe Dameron picture below look like the character, but do not really nail the actor’s likeness.  This S.H. Figuarts Obi-Wan really gets Ewan McGregor right.  It is almost uncanny in fact.  While I think the pictures give you a sense of how nice these figures look, it doesn’t always completely translate so believe me when I say this figure looks incredible in-hand and better than even the pictures here indicate.

One of the other surprising parts of this figure is that Obi-Wan’s hair is actually painted a metallic color.  This makes his hair shinier than on most other figures which looks funny under a lot of light.  In normal light though it captures the highlights in hair we all see in day-to-day life.  I also liked how they layered the paint so there is a darker shade of brown as well.  This makes the hair look realistic.  I don’t know if I love the metallic paint and I think his hair is slightly too light compared to the actor but it is a bold choice and makes this figure stand out.

While Jedis are hardly flashy dressers, this figure has some impressive details.  The belt has really nice, clean paint.  The cloth on his robe is all plastic, but it has the texture that you would expect to see in fabric and is impressive visually and even to the touch.  The arms also have an accurate fabric look that captures the folds well.

There is only one paint issue with this figure and that is the black spots on his boots.  Whenever the black wash (a lighter and more watery black paint which gives the boots shading) was applied, some black paint dripped onto the boots and was never corrected.  Fortunately, this is the only paint issue on the entire figure and so I can’t complain too much about that.

Articulation – The real draw of the S.H. Figuarts line outside of the excellent actor likenesses is just how articulated they are.  They are so articulated in fact, that I won’t bother going over all of the articulation.  There are over 20 points of articulation and the arms and legs can go in pretty much any direction you could ever want.  I messed around with this figure to take pictures for this review and felt like I was barely scratching the surface as far as what kind of poses Obi-Wan can do.  This figure also challenged my posing skills and made me realize just how creative you can be when you have a figure like this.  Of course, it would help if I had another figure to use with him like a certain Darth Maul, but even on his own Obi-Wan is impressive.

Issues – While I’ve pointed out a few small downsides, there are two bigger ones with this figure.  The first is that the arms do pop out of their sockets easily.  Obi-Wan has one arm that came off several times when posing and it is a little hard to get the arm back in once it pops out.  This is not a huge issue and you do want to be gentle when you pose the figure, but it would be nice if it was something I didn’t have to worry about.  I’ve heard that other figures in the line have this issue so it is certainly something to be aware of and might be a common problem.

The bigger issue is the gripping hands.  What a debacle they were!  I absolutely could not get them on the ball pegs for his hands.  The problem is that the holes in the hand are up in the thumbs instead of the center of the hand.  That and I think the hole was not big enough for the ball peg.  I tried tens of times to force the hands onto the ball pegs with no luck.  I was starting to worry because what good is the figure if Obi-Wan can’t hold a lightsaber?  Fortunately, I tried a trick for other action figures that I’ve heard can help.  After heating up some water, I put the ball peg in the hot water for a minute or two to soften the plastic and finally after a number of attempts, I was able to get both gripping hands on the ball pegs.  This really was a lot of extra work that shouldn’t have been needed.  Obi-Wan is the only S.H. Figuarts with this issue and his other hands like the open and force hands are easy to get on the pegs so I’m optimistic that this is not a problem with any other figures in the line, but do keep in mind that patience is needed with this one.

Closing Thoughts – Once you get the gripping hands to work, this figure really is incredible.  There are minor issues like the arm popping off and some paint issues, but on the whole Obi-Wan has sold me on this line and now I want to collect all of them.  Going back to when Special Edition and Phantom Menace came out, I was crazy for Star Wars and loved collecting the action figures.  Obi-Wan feels like the high quality and fun figure I wanted back then but couldn’t afford and technology wasn’t able to create.  If you like Star Wars and can afford paying $50-80 a figure, this line gets a high recommendation from me and I know I will be collecting as many of them as I can.