After a long wait, Nintendo has released a new line of Amiibos to tie in with Kirby: Planet Robobot and it is exciting for me as a longtime Kirby fan and as someone who loves Amiibo.  My only real concern about the Kirby line is that it would have been nice to see a couple more new characters instead of three repeat ones, but even that hasn’t diminished my excitement for these new figures.  If you’ve read previous Amiibo reviews, you’ll know I always try to discuss rarity for collectors, but this time, the Amiibo just came out yesterday so I can only do a little speculation and talk about what I noticed when buying it.  Take the rarity section for what it is, an educated guess based on my experiences.  With that said, let’s jump into the review. 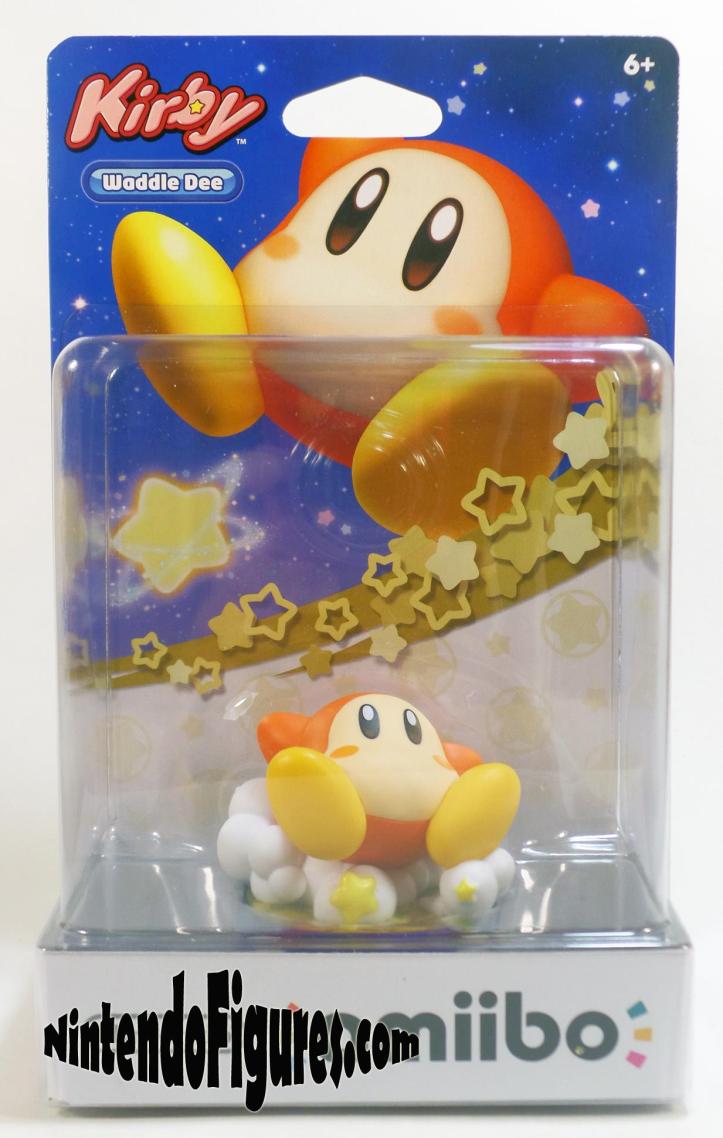 Packaging – With a new series of Amiibo comes new packaging and how do the Kirby Amiibos look?  Well not as bad as I thought initially when these Amiibo were announced.  The packaging is slightly plain, but I like the fade in the night sky and the stars across the middle look better than the original pictures.  My biggest complaint is that the background image is inferior on the repeated Amiibos (Meta Knight and Dedede in particular) though that is not an issue with Waddle Dee.  Ultimately, I think packaging is fine, but does not look as good as the Mario Party or Smash Amiibos and that made it easier for me to open this guy for the review.

Rarity – The trend of recent Amiibo have been that they are all incredibly common and easy to get.  Kirby Amiibo seemed to follow that with pre-orders going up early and staying up all the way until release.  However, I went to a couple of retailers yesterday (mostly because I was hunting for World of Nintendo figures) and I think there are less Kirby Amiibo than some of the other recent releases.  I could have found every Amiibo in store today had I not pre-ordered, but depending on demand and how much stock is left in the back of the store, the Kirby Amiibo might be a little less overproduced and less likely to be put on sale for dirt cheap in a few months.  Nintendo needs to reverse this trend and while I know it is great to buy cheap Amiibo, if the demand and supply are more closely aligned, it would be best for almost everyone. 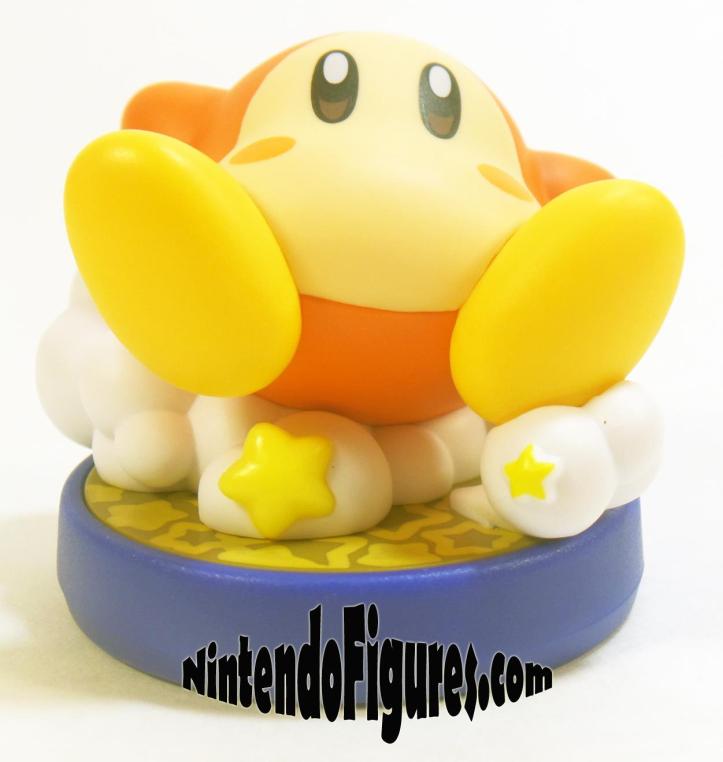 The Figure – Waddle Dee is an interesting character.  He started off as an enemy in Kirby games, but became such a bad/incompetent enemy that he has started to become a friend or ally of Kirby as much as an enemy.  This of course works with Kirby’s cute and kid-friendly tone and Waddle Dee’s cuteness is definitely in effect here.  He/she looks pretty harmless floating on the clouds and you can’t help but smile looking at Waddle Dee.  The paint is generally great on Waddle Dee with the exception that some of the stars are not painted in quite as well as they should be on my figure.  Much like Kirby, Waddle Dee is a simple character and there is only so much you can do with him pose wise and I think Nintendo has made an Amiibo that captures the character and stands out from other Amiibo, especially with the cloud underneath Waddle Dee. 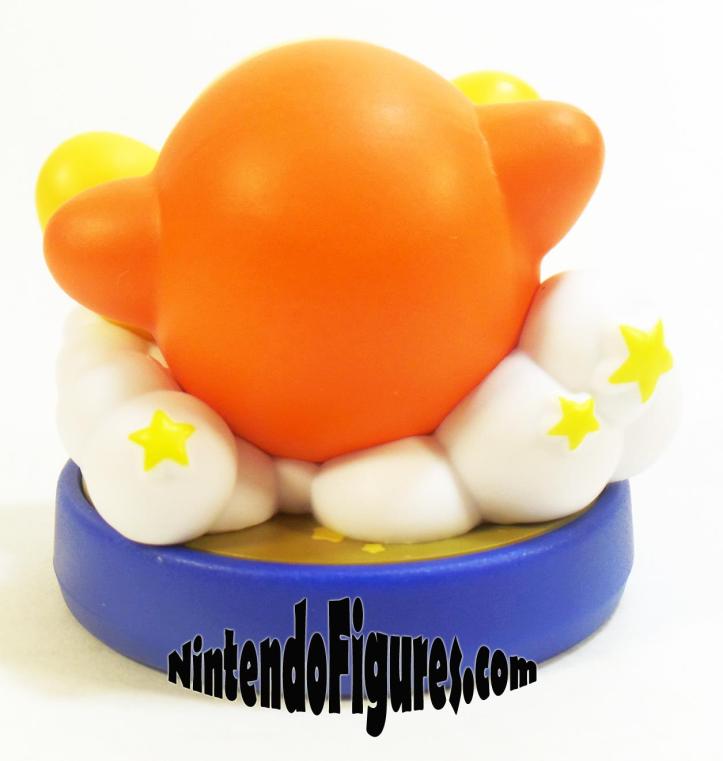 One reason I like Waddle Dee better than the new Kirby Amiibo is that unlike the Warp Star Kirby sits on, which has very noticeable seams, you can barely see any on this Amiibo!  It is impressive that Nintendo was able to do that.  I also like how Waddle Dee looks great at eye level or from above because he is looking up.  Waddle Dee is one of the few Amiibo that looks excellent from several angles. 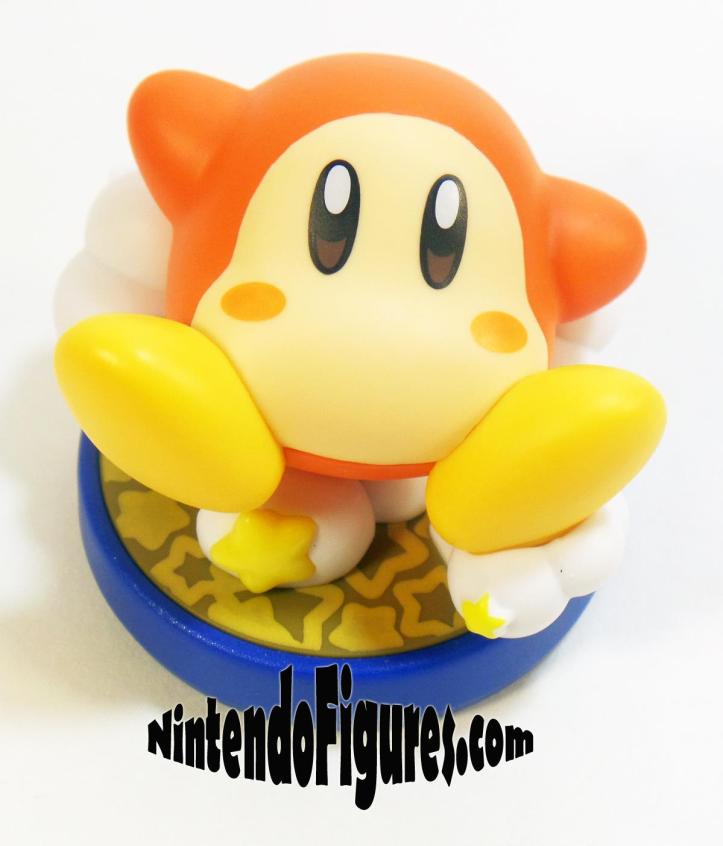 The Base – New Amiibo lines also mean new bases and while the blue color was easy to see as soon as the Kirby Amiibo were unveiled, what might interest collectors is what is on the top of the base.  It is actually a star pattern not unlike what is on the cardboard backing of the packaging.  It looks really nice and better than the hard to see Super Mario design for sure.  While there isn’t a lot of it that you can see on the base because of the cloud and figure taking up most of the space, what is there is nice.

Functionality – Surprisingly, the new Kirby Amiibo are not well-explained on Nintendo’s website at the time of writing.  They definitely unlock a character specific power-up in Kirby: Planet Robobot and either work the same as their Super Smash Bros. equivalent or in the case of Waddle Dee, may only work in games like Captain Toad and Hyrule Warriors where basically every Amiibo does the same thing.  Unfortunately, it would appear that these Amiibos are pretty low on how useful they are in games and I would recommend buying them more because you like the figure (or you can’t get the Smash Bros. equivalent) than because they are going to be used in a lot of games.

Closing Thoughts – Waddle Dee is a small and cute Amiibo that appeals to Kirby fans.  He/she is a character all Nintendo fans know, but may not have a strong opinion of.  I suspect a lot of people who are not Kirby fans will be happy to skip this one, but I’m happy to say the figure is really well done with the exception of the packaging which is just okay.  I really like this figure and would certainly recommend it even with Waddle Dee’s more limited appeal compared to the other characters in this line.