Continuing the reviews of the Kirby line of Amiibos, today we’re going to take a look at King Dedede.  While I wasn’t really doing it intentionally, I realized that I have actually been reviewing the Kirby Amiibo in the order of my excitement level for each figure which may or may not bode well for this Amiibo.  I actually love King Dedede as a character and think he is nearly as great of a villain as Bowser.  He has also been a staple in Kirby games since the very first one on Game Boy so any Kirby fan knows him well.  Throughout this review, I will compare the new Kirby Amiibo to the Smash Brothers one, because many people who own the Smash Brothers one already may wonder if this new one is worth picking up.  Nintendo made some interesting design choices with this figure so let’s jump in and take a closer look.

Rarity – The Smash Brothers King Dedede Amiibo has been sneakily hard to find.  While it has never been one of the most valuable Amiibo, it is still a harder one to track down and sells for around $20-$30 unopened on Ebay.  The rarity of the new Kirby King Dedede Amiibo is harder to judge.  I don’t think it will be as rare as the Smash one, but I don’t think it will be as common as some of the recent Smash Brothers Amiibo like Falco or Lucas have been either.  If you want King Dedede for retail price, this new one is your best chance and while I think the Kirby King Dedede Amiibo will not be common, it will probably always be a bit cheaper than the Smash one. 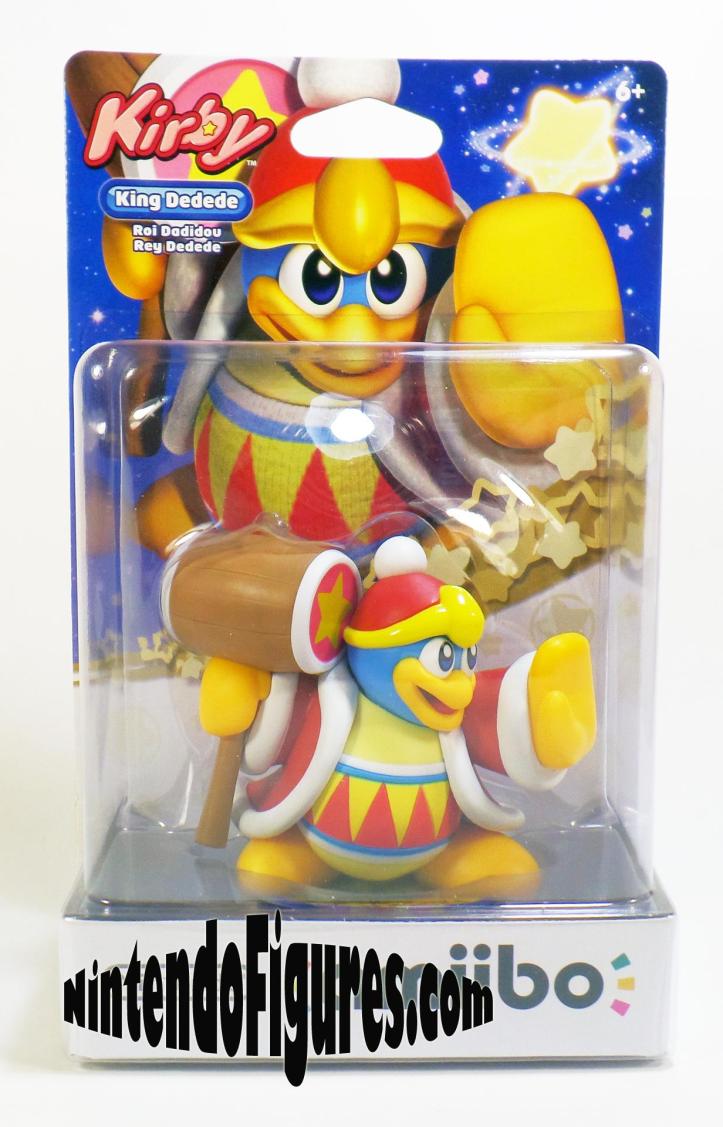 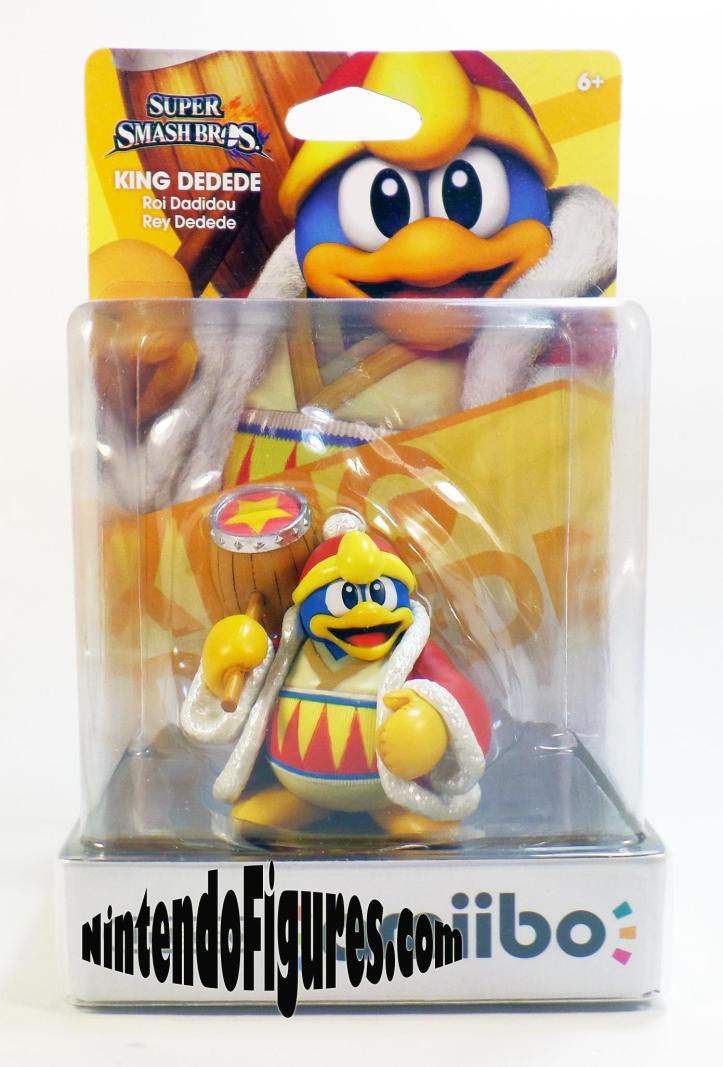 Packaging – I have slowly but surely come around to the packaging in the Kirby line and I like the portrait of Dedede pretty well on the new Kirby figure.  However, the Smash portrait is also quite endearing and I really like the yellow color which stands out from almost all of the other Amiibo.  The excellent packaging and rarity are the two big reasons why I have not opened my Smash Bros. King Dedede.  I think he just looks perfect in the packaging.

Pose – If there is one thing you could criticize the Smash Brothers Amiibo for it is surely the static pose of King Dedede.  He is just standing there, smiling, and holding his hammer as if he doesn’t have a care in the world.  The Kirby Amiibo attempts to improve this with a slightly more dynamic pose.  King Dedede seems to be telling someone to stop and is at least holding his hammer as if he might swing it.  This is certainly better than just standing there and yet, it is only a marginal improvement and I find myself preferring the Smash Brothers Amiibo because of other factors like the packaging.

I think Nintendo actually missed a golden opportunity here.  If you’ve played many Kirby games, there is one familiar King Dedede animation you have probably seen.  King Dedede always swings his hammer at whoever opposes him and how awesome would this Amiibo have looked if he was mid swing or even hitting the ground with his hammer?  It would be more dynamic, visually interesting, and it would capture his character better too.   Most importantly, it would have gotten Amiibo fans more excited about this new King Dedede. 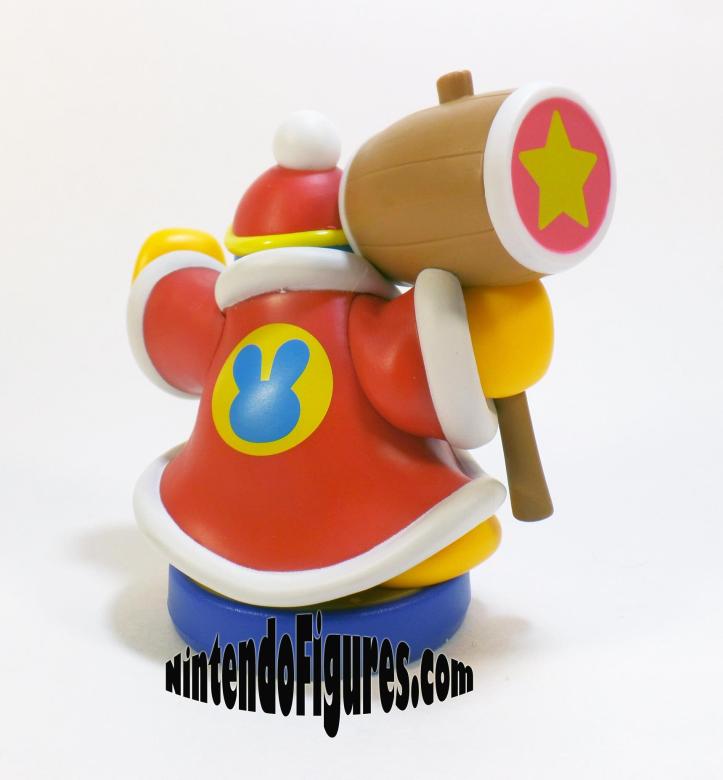 Paint and Details – As you look at King Dedede, it is clear Nintendo went for a clean and cartoon style with this new Amiibo.  There are no shadows or shading on this figure and all of the surfaces are smooth.  This means that the new Amiibo has less detail than the Smash Brothers one which is a little disappointing.  While the details are missed, there are a few things the Kirby King Dedede Amiibo does really well.  It is hard not to appreciate how clean the paint job is even if this is almost standard with Amiibo now.  The decal on his back also looks great and makes King Dedede the only Kirby Amiibo I’ve reviewed that is interesting to view from other angles other than the front.  His eyes are also perfectly done and are striking when you look at the figure.  My only real complaint is the glossy yellow paint used on his crown or the rim of his hat.  The whole figure is done in a flat or matte paint that is not shiny so why use a shiny paint there?  The glossy part really sticks out when you look at the Amiibo and it did not need to.  Small details like this are what holds this Amiibo back from being great.

Functionality – While it took a while to know for sure, Nintendo has finally confirmed that the new version of King Dedede has the same functionality as the old Smash Brothers one.  So that means you can use this Amiibo in Smash Brothers, Super Mario Maker, Kirby and the Rainbow Curse, and a number of other games like Captain Toad: Treasure Tracker and Hyrule Warriors where the new Amiibo has the same functionality as any other Amiibo.  Overall, this is a fairly useful Amiibo and if you own or are planning to buy Kirby: Planet Robobot then it is especially nice to have, because Dedede unlocks a unique power in the game. 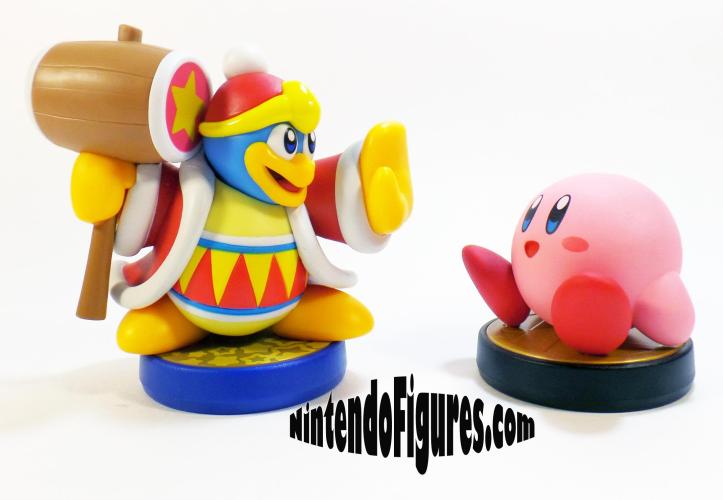 Closing Thoughts – While I like this Amiibo, I do think Nintendo missed an opportunity to improve upon the Smash Brothers one.  The Kirby King Dedede Amiibo retains the charm of the character and gives us a cooler base, but the pose and paint job are either too similar or not really an improvement on what has already been done.  Many people who have the Smash Brothers version of King Dedede will probably end up passing on this figure, but if you don’t have Dedede and want him, this is not a bad version at all to get.  Whether you like him better than the Smash Brothers version is a matter of taste, but this version is, and will almost definitely continue to be cheaper which is certainly something to keep in mind.