While I’ve got plenty of Nintendo articles in the pipeline, I have also been collecting more Star Wars figures and wanted to sprinkle another Star Wars review into the mix.  Darth Maul is an iconic villain and is one of the highlights of Phantom Menace (a movie that is not highly regarded, but I have some nostalgia for).  Way back in 2000, he blew our minds with his double-bladed lightsaber and in this review we will see if the novelty and excellent design of this villain still hold up.

Rarity and Packaging – Darth Maul was released last year (2015) and is becoming rarer and rarer by the day.  Originally, this figure was around $50-$60 and now he goes for $80-$85.  I suspect a new Darth Maul will only go up in price unless there is a reprint which seems unlikely.  So if you’re interested in this figure, don’t wait long to get it. 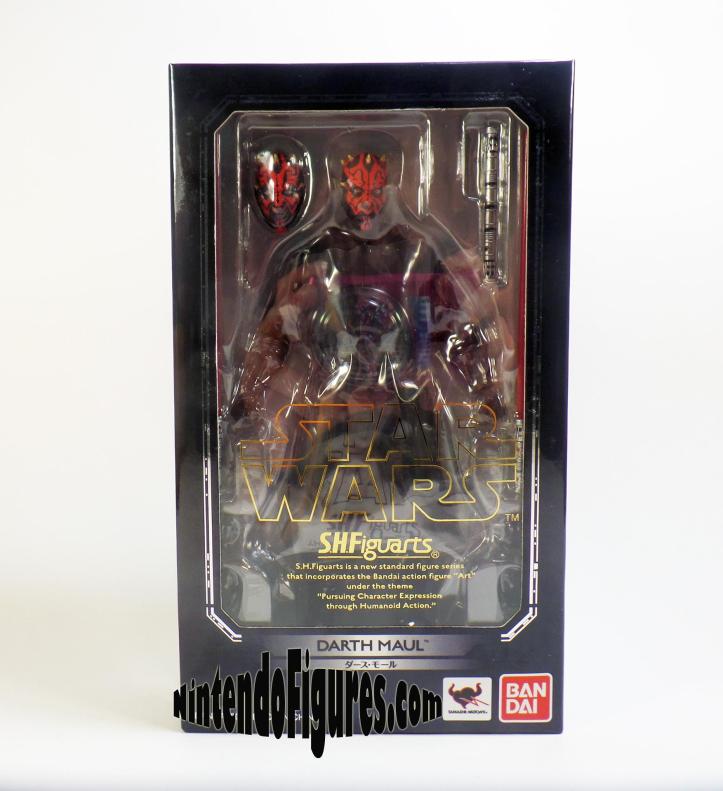 Since I covered the packaging in detail in the Obi-Wan review, I will discuss it briefly.  The box is small, compact, and very well-designed.  The pictures on the back get you excited to open the figure even if both of the poses shown are really difficult to achieve without any kind of a stand.  This is still some of my favorite figure packaging and S.H. Figuarts deserves praise for that. 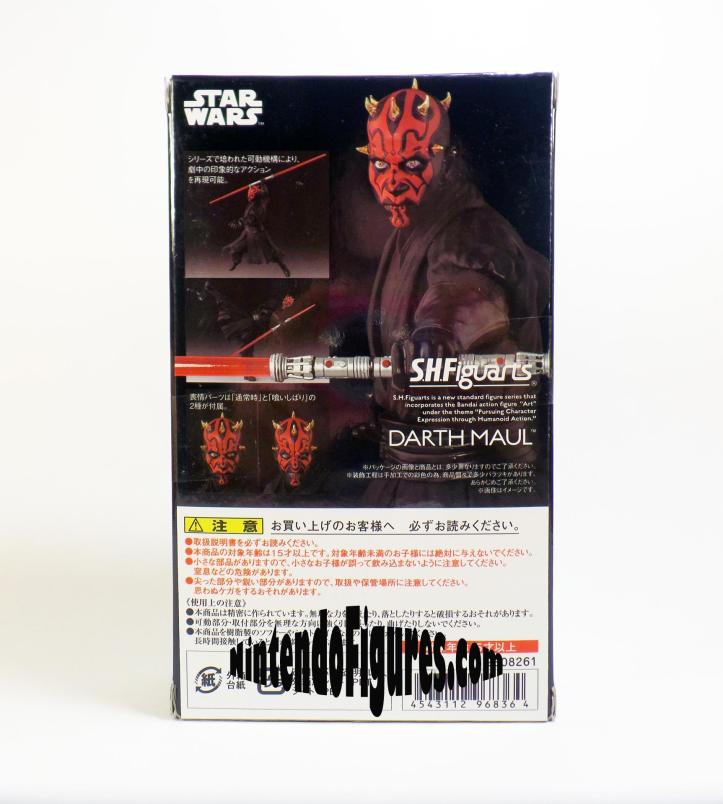 Accessories – As with all S.H. Figuarts, the accessories here are top-notch.  As you would expect he comes with two heads.  A serious/stoic face and a grinning, exerting himself face.  These are really the only two expressions other than maybe a smirk that Darth Maul exhibits in Episode One so S.H. Figuarts really has us covered there.  The likeness to the actor (Ray Park) is incredible.  I think both the resemblance to the actor and the small details in the face tattoos are perfect and one of my favorite parts of this figure.  From certain angles, the eyes do look slightly cross-eyed but this is a minor complaint considering how good the rest of it looks. 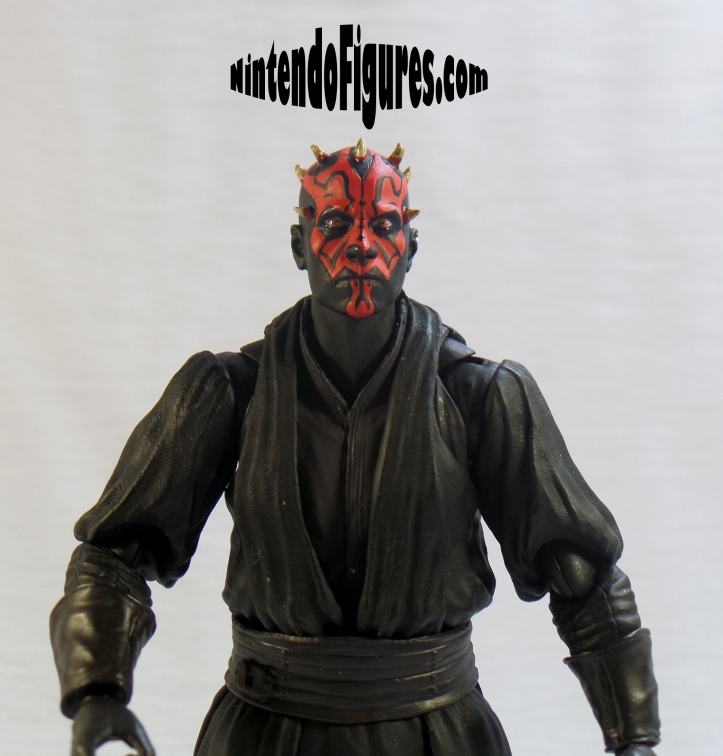 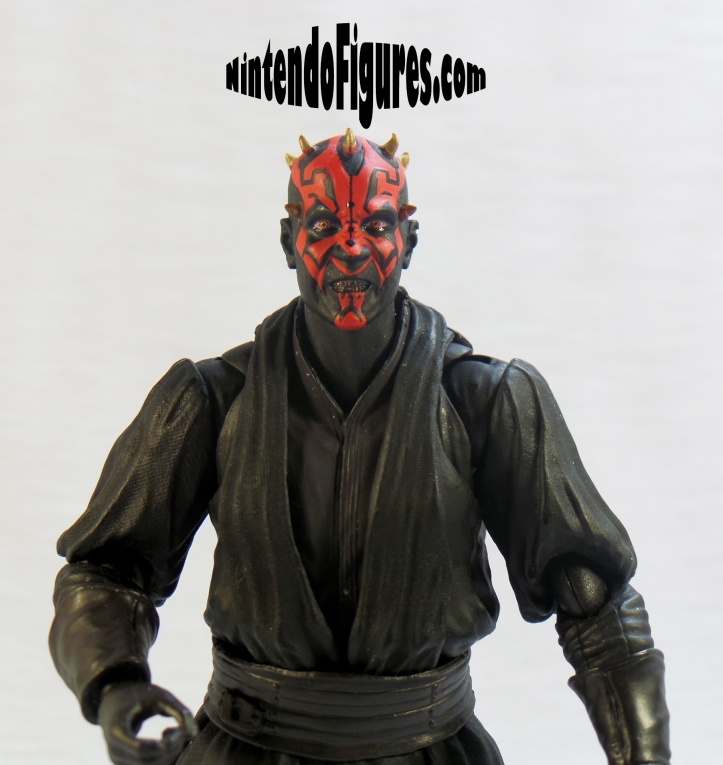 Darth Maul also comes with his famous double-bladed lightsaber and two single-bladed lightsabers.  A long time ago, I used to have a toy replica of Darth Maul’s lightsaber and so it is one of the few ones that I can judge for accuracy and the S.H. Figuarts one is perfect.  The double-bladed and single-bladed  lightsabers are also easy to use and look fantastic in action.  As a side note, in some of the pictures in this review, the blades look slightly pink.  This is only because of how many lights I use to take pictures and the translucent plastic which is susceptible to light.  In person, the blades are a nice deep red just like in the movies. 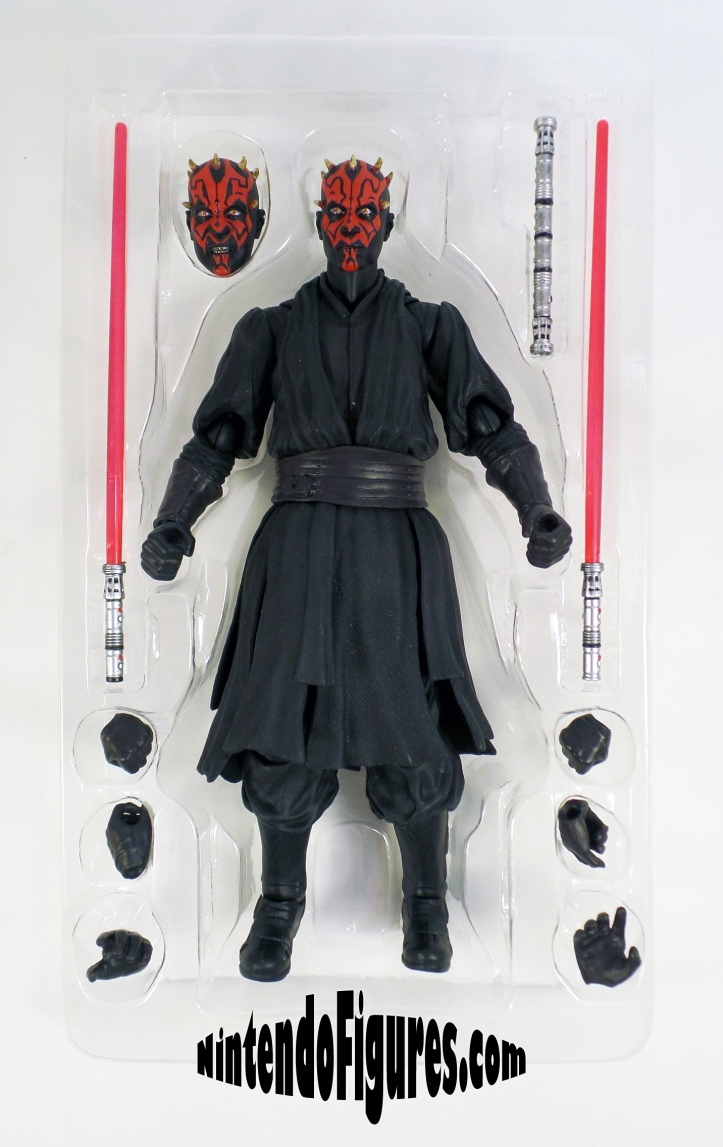 Finally, we get a number of hands.  The first are fisted hands which are great for when Darth Maul is fighting and not using both hands for a lightsaber.  There is the gripping hands which I used for all of the lightsabers in the pictures.  They work well and hold the weapons tightly.  A loose gripped hands which I did not use at all and I’m not sure why they are included in this figure.  This hand looks best if Darth Maul is holding the lightsaber somewhat loosely and that obviously goes against any kind of interesting action pose.  And finally we have force hands which look great when used in an offhand or to show Darth Maul using the force or gesturing to his opponent like in the picture below.  These hands are not as fun to use as Obi-Wan’s, but they are much easier to use and swap out.  The only difficulty I have run into is that one of the pegs that goes into the arm and the hand does not stay in the arm when swapping hands.  So instead, I pull off the hand and then have to pull the ball peg out of the hand which is kind of hard to do since it is so small.  I suspect this could be fixed with some hot water to loosen the peg that goes into the hands but this obviously requires some extra work which is a minor annoyance. 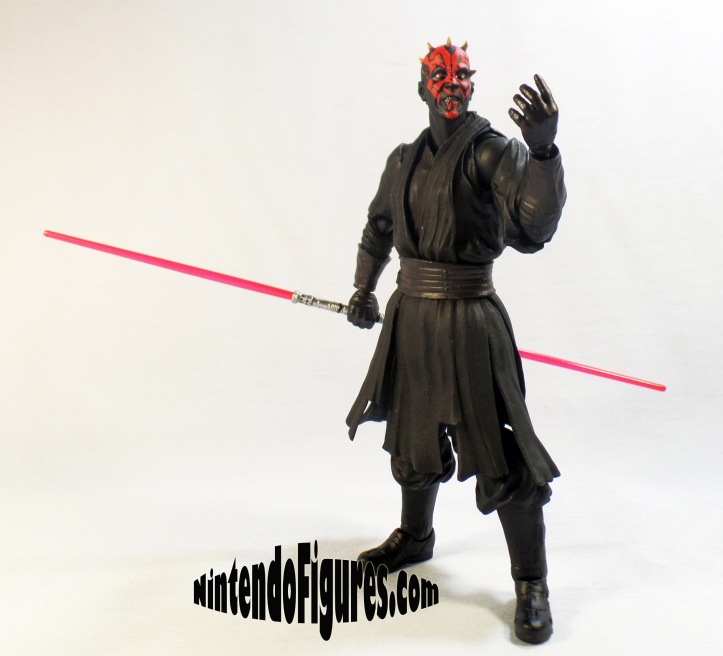 Overall, the accessories are really strong.  Darth Maul is designed with the final lightsaber fight in Episode One in mind (as opposed to the one he has with Qui-Gon on Tatooine where he is wearing a cloak) and S.H. Figuarts has given us everything we could need or want for that.

Paint and Details – Since I already discussed how well done the details on the faces are, I will only mention that there are zero paint issues on my figure.  Outside of the face and lightsabers, the robes are all in a black paint that captures the look of real cloth despite the figure being entirely plastic.  Outside of buying a Hot Toys or Sideshow Collectibles Star Wars figure, this is as high quality of a Star Wars figure as you will find.

Articulation – The articulation on this figure is similar to Obi-Wan with a few noticeable exceptions.  Darth Maul has “ankle rockers” which are very useful for posing him in an action pose because you can angle his foot in many different ways and make it easier to balance the figure.  Darth Maul also has more flexible arms than Obi-Wan because his robes don’t affect articulation quite as much.

The downside to Darth Maul is the lower part of his robes do inhibit his leg and knee articulation a bit.  He can still bend them, but it just seems a bit harder to do so than if the robes weren’t there.  The other minor issue is that a small piece right underneath Maul’s collar does not always cover up a gap in the shoulder joint.  As you can see in the picture below, it sometimes can be exposed and makes the figure look a little less appealing.  This only happens in certain situations, but as always, I want to cover all of the positives and negatives of a figure, particularly when they’re as expensive as this one. 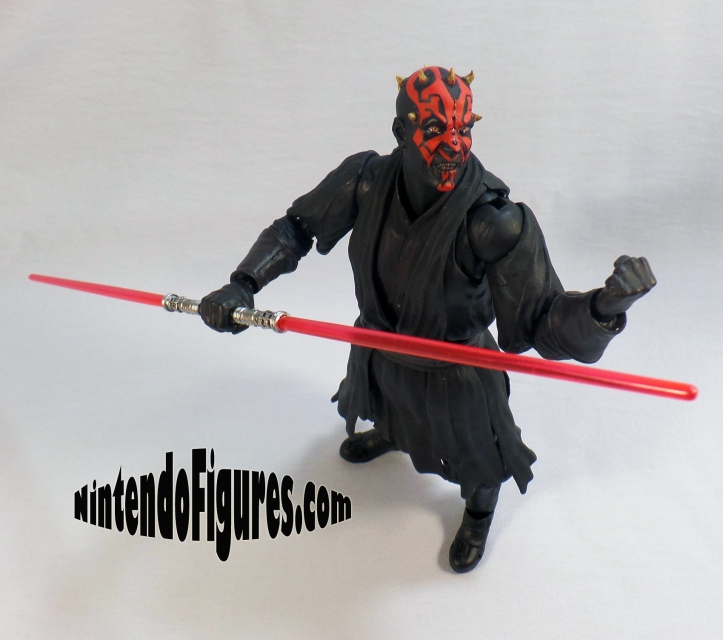 Overall, this figure is a bit better than the Obi-Wan figure both in articulation and it has fewer annoyances like with swapping hands.  Being able to mix and match from a double and single bladed lightsaber also helps.  If you want an awesome Sith to display, Darth Maul is the man.  I was able to get him in a ton of poses as you can see below and in the next section I’ll discuss recreating some movie poses too. 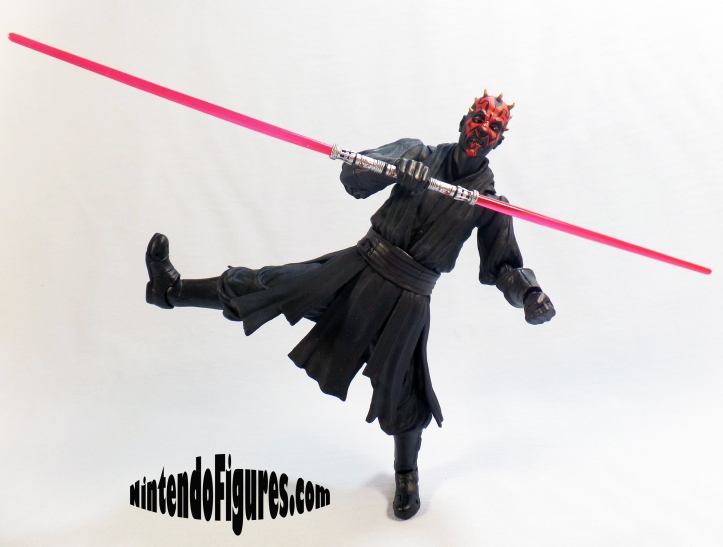 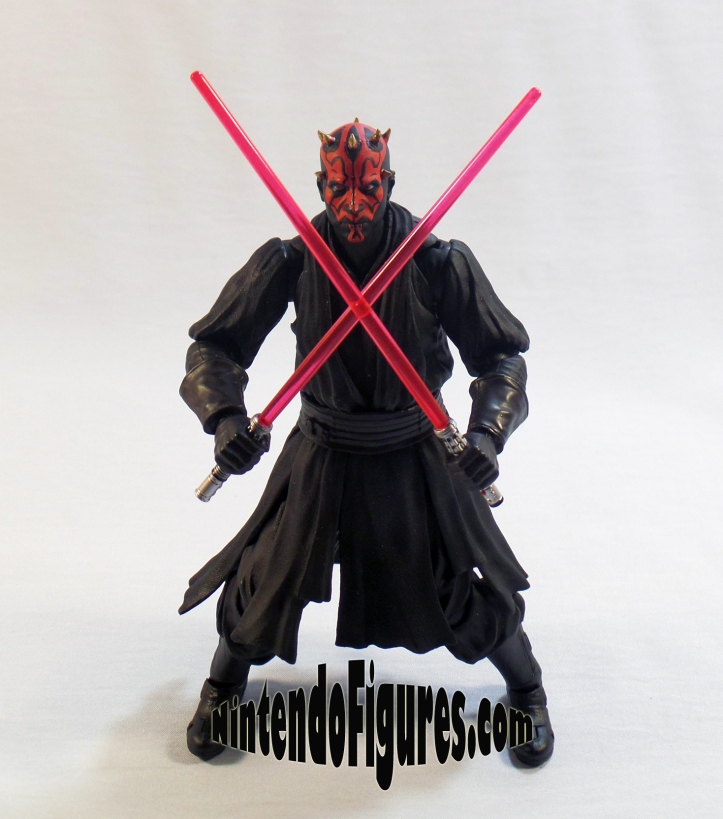 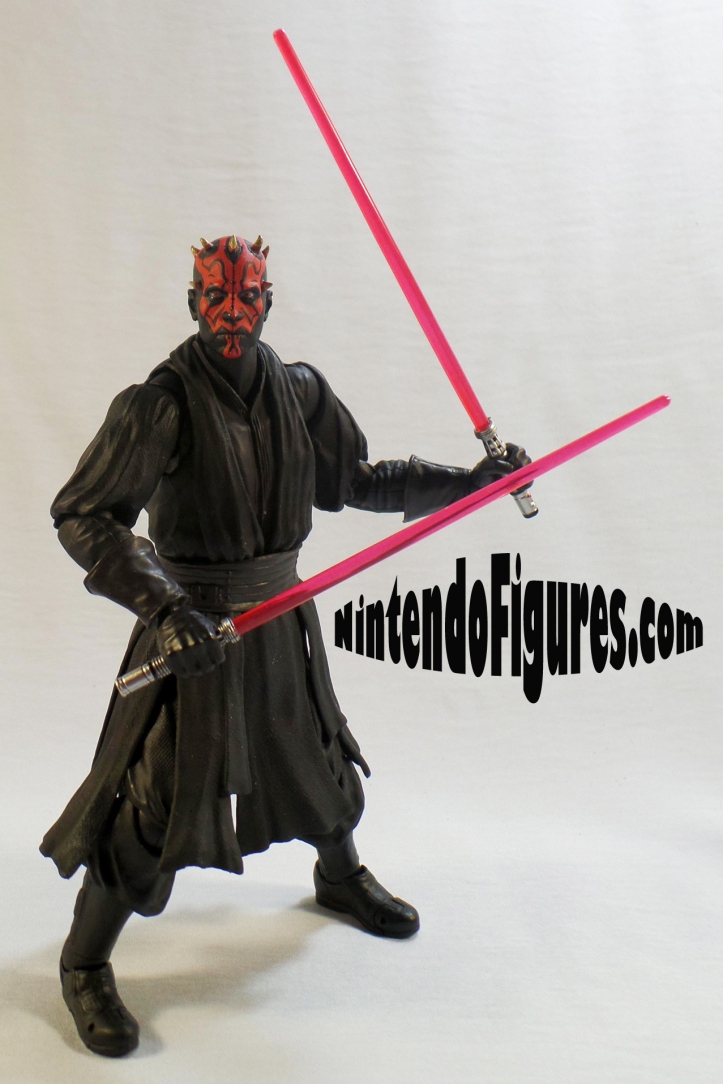 Movie Poses – As a challenge to myself and because I was curious, I decided to find some images from Phantom Menace and see if Darth Maul can get close to recreating them.  The first I tried was the iconic moment where Darth Maul shows off his double-bladed lightsaber.  While I couldn’t quite match the arching of the back, the rest of this pose is easy to nail and looks great. 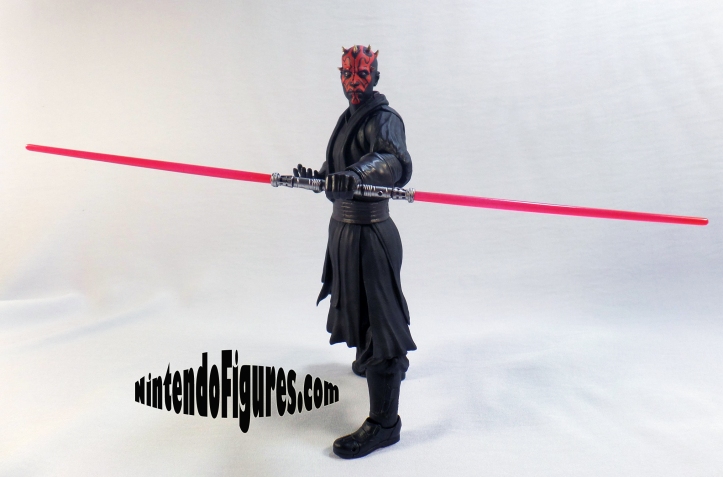 Unfortunately, many of the images of Darth Maul show him fighting Qui-Gon and Obi-Wan and we don’t have a Qui-Gon figure yet, so I had to look for ones where just Darth Maul and Obi-Wan fight.  I found this image which was pretty easy to recreate and looks great.  Unfortunately, some of the other images of these two could not be recreated because Obi-Wan wields his lightsaber with two hands in the movie and the figure has a limited range of movement when Obi-Wan uses both hands to hold the lightsaber.  I think with Qui-Gon, you should be able to recreate quite a few moments in the lightsaber battle, but it would depend on how well he and Obi-Wan can match the poses from the movie.  Darth Maul can do many different poses (to the point where it feels almost limitless) and is a ton of fun to mess around with. 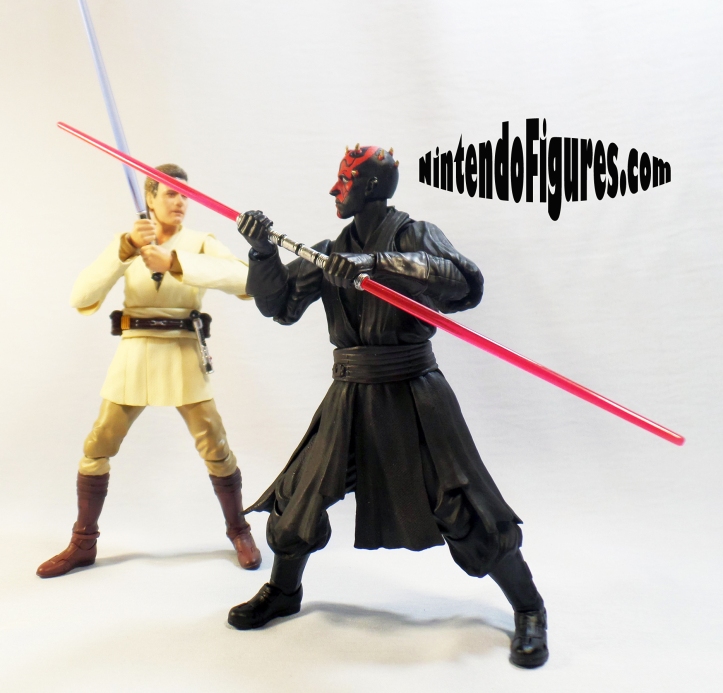 Closing Thoughts – I love this figure and I think it might be the best one I own so far.  Darth Maul can do so many different things and I can easily look past the minor drawbacks like limited leg articulation.  I hoped that owning two related Star Wars figures would make both more fun to own and that also proved to be the case.  It is satisfying to build your collection and be able to make a simple display with Obi-Wan and Darth Maul like I did in this review.  While there are larger (and more expensive) Star Wars figures on the market, I think S.H. Figuarts provide the perfect mix of size, quality, detail,  and articulation and are just really fun to own.  I look forward to reviewing many more Star Wars figures on the site as I can afford to buy them!