This is a special review here on NintendoFigures.com because I’m going to review no less than five figures all at once.  Some of the most popular World of Nintendo 2.5″ inch figures has consistently been from Pikmin.  At this size, the figures are just about in-scale with the video game and if you like Pikmin at all, then you know how cool it would be to make your own Pikmin army!  I would even go so far to argue that Pikmin are one of the only figures in World of Nintendo that is hard to get not because a low number have been made but because they are so popular with collectors and sell out quickly.  It took me quite a bit of effort to assemble all of the Pikmin figures for this review and I had to pay above their retail price online ($8-$9 each) because I have yet to see one for sale in-person.  Needless to say, I’m excited to bring you this review!

Articulation – If you’ve purchased many World of Nintendo 2.5″ figures than you probably already know that the articulation is either non-existent or pretty limited throughout this line.  The Pikmin and Olimar are no exception.  They only have one point of articulation and that is their head which can rotate 360 degrees.  While this is certainly a nice feature to have, these figures are definitely an example of what you see in the box is what you get.

Pose and Stand – As you can see from the pictures, the Pikmin all have the same pose.  They’re standing passively with their arms to their sides.  It would have been nice if some of them looked like they were running or we had the option to make them look that way with articulation but unfortunately, we do not.  One interesting thing is that the Pikmin do come with is a stand and it is all but essential to make the Pikmin stay upright.  Because their heads are larger than their feet and the leaf or flower on top only adds to the difficulty of balancing them; it is very difficult, if not impossible to get any of the Pikmin to stand without a base.  One of the four Pikmin I bought has a peg that is too small or the hole in his foot is too large and the Blue Pikmin falls off the base quite easily but the other three fit tightly and work well.  You have no way of knowing this before you purchase the figure so all you can do is keep your fingers crossed and hope your luck is good.  It is also worth nothing that all Pikmin have a factory number on the back of their heads which is common with World of Nintendo 2.5″ inch figures.  It is not attractive but it is not at all surprisingly either.

Unfortunately, Olimar does not stand up well at all either.  He is top heavy because of his helmet and his pose makes it that much harder for his feet to balance the figure.  Even on a flat surface, I had a difficult time balancing him.  I would have gladly taken a stand if it helped with Olimar but there isn’t an option to use one and so he is very tricky to balance and it takes away some of the fun from owning him.

Paint and Details – Since some of the Pikmin figures I have purchased are older (going all the way back to Series 1-3) and some are newer (Series 1-6, I was relieved to see that there were no paint issues on any of the Pikmin.  Olimar has a little bit of red paint where it shouldn’t be on his arm, but this is the only issue I noticed.  His “glass” helmet also had a scratch on it on the back, but otherwise, it looks amazing and Olimar looks like he is a real life version of the character in the video game.  I would love to see Jakks revisit Pikmin and give us figures for other main characters like Alph or Louie at some point, because Olimar looks really good. 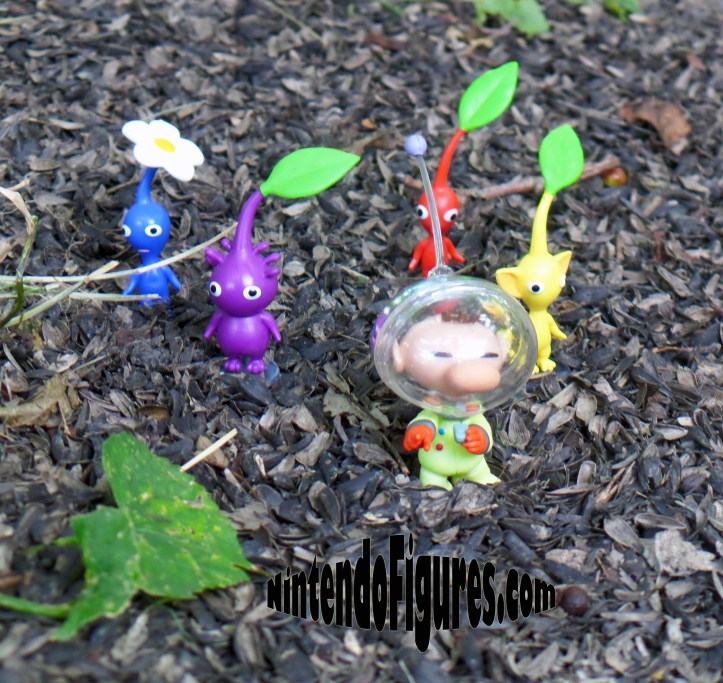 Display Options – One of the big reasons I had to buy these Pikmin figures because I hoped that they would lead to some excellent pictures.  You can see in this review the Pikmin look very real and are great for pictures outside.  While you can’t hide their bases easily, when you can, it looks like the Pikmin are real.

Closing Thoughts – It is rare for World of Nintendo not to have some downsides and the inability to balance Olimar is a pretty big problem.  The Pikmin are quite a bit nicer and other than their static poses (and to a lesser extent, no articulation to change that), I think they will make any Pikmin fan happy.  As you can see in the review, it is really easy to use these figures to recreate some shots from Pikmin.  Of course, if you can somehow find these figures for cheap, you can create an entire Pikmin army and really take your collection and pictures to the next level!  Other than having some difficulty balancing the figures, I had fun taking pictures for this review and am really pleased with the results.  The Pikmin figures are among my favorite in World of Nintendo (both because of the game license and how great they look in pictures) and are something I will definitely be displaying on my shelf in the future.