Bowser Jr. has become a regular villain in Mario and Yoshi games and is quite a cute and amusing one at that.  While the Bowser Jr. Amiibo is a fantastic representation of him in the Clown Car, World of Nintendo has created the first figure of Bowser Jr. outside of his airship (or whatever that thing is).  For me, this was one of my most desired World of Nintendo figures over the last couple of months.  Unfortunately, he was at least initially hard to get.  The stores near me never had him but more recently I noticed that his availability has gotten better and I was able to get him for retail price on Ebay which was a pleasant surprise.  Was he worth the wait (or worth hunting down if you haven’t gotten him yet)?  Let’s find out!

Articulation – Bowser Jr. has 10 points of articulation which is about average but maybe just a little less than other figures I have reviewed.  The best point of articulation is his head which rotates 360 degrees.  This is impressive because of the bib that Bowser Jr. wears and while the bib could have easily limited articulation, Jakks designed this figure so that it wouldn’t.  Bowser Jr.’s arms move up and down a decent amount and his hands rotate 360 degrees which is handy with his accessory.  While there is leg and tail articulation on this figure, I’m not sure that either is very useful and Bowser Jr. is back heavy so it is hard to mess around with the feet very much or he is unlikely to stand up.  Overall, Bowser Jr. is not overly articulated and you can’t do many poses with him but the ones he does have work well.

Paint and Details – The paint job looks good in many places on this figure.  The back shell is free from mistakes and looks nearly as good as an Amiibo.  Bowser Jr.’s bib has a pretty nice “hand-painted” look to it and captures the feel of Mario games.  Since I bought this figure online (and maybe didn’t pay close enough attention) I was disappointed to see that there is a black smudge under his nose and there is some kind glue or glossy black paint on Bowser Jr.’s bracelets.  Both of these issues seem like bad luck on my part but it is still a shame that the paint job is nearly perfect and the figure is marred by other small issues.  It is not at all uncommon for World of Nintendo to have some kind of paint issues and this only emphasizes that World of Nintendo figures are best bought in a retail store where you can inspect them.

Accessory – The best part of this figure besides the paint job is definitely the accessory.  Jakks Pacific have gotten better and better with these and giving us a Bob-omb that is in-scale with the 4″ figures is really awesome.  It is essentially like getting an extra figure in the box because Bob-omb can be used with any Mario figure or even just on its own.  Bowser Jr. can easily hold the Bob-omb so it looks as if he is throwing it.  These kind of poses look awesome and are the real strength of this figure.  In my opinion, the cool displays you can make are what makes up for the limited articulation. 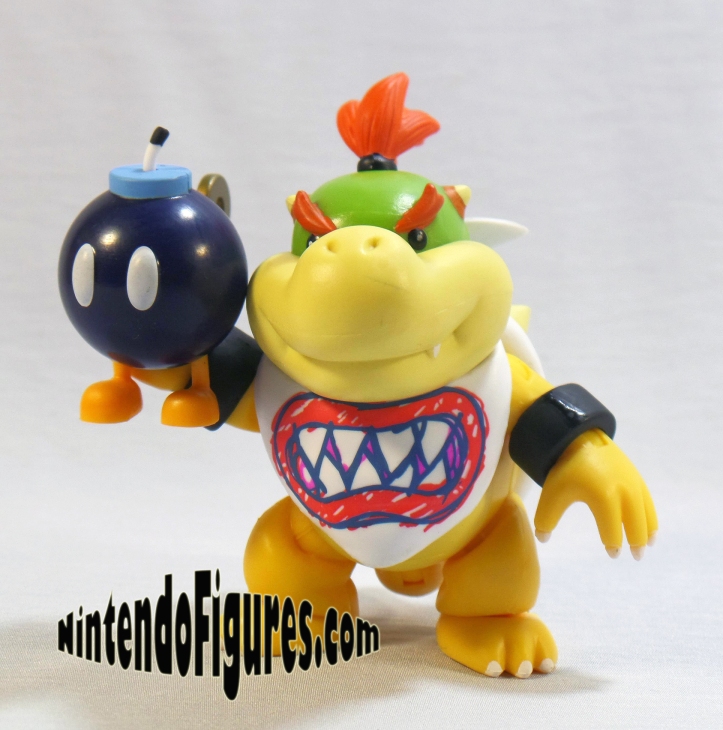 Closing Thoughts – It is a shame this figure has been hard to track down at retail because it is fun overall and an impressive example of what World of Nintendo can be.  Not every figure is this exciting or cool to own but I think any Mario fan would really enjoy this figure and have fun with it.  I feel fortunate to own it and had a blast writing this review.  Bowser Jr. shows the potential of the World of Nintendo line of figures and I hope Jakks Pacific will find ways to create more unique figures like this in the future.