When I started this site, I had two goals.  One is to cover Nintendo figures in a way that is fun for me to write and for you to read.  The second is to help inform fans on the figure options they have and evaluate as many new releases when possible.  I’m lucky enough to review a lot of awesome figures and the positives usually outweigh the negatives.  Unfortunately, that is not the case with this figure.  While I don’t like to write any negative reviews, in this case, I think it is important to share why Villager is a poor figure so that others will not make the same mistake as I did buying him.

Packaging – Here is a look at the new Animal Crossing packaging for World of Nintendo.  It isn’t my favorite and I think Animal Crossing Amiibo look a lot better but I do appreciate the bold color.  As you can see from the back, outside of Samus, Villager, and Chain Chomp, Wave 2-2 isn’t very exciting because it mostly repeats 4″ inch figures which have better articulation and detail. 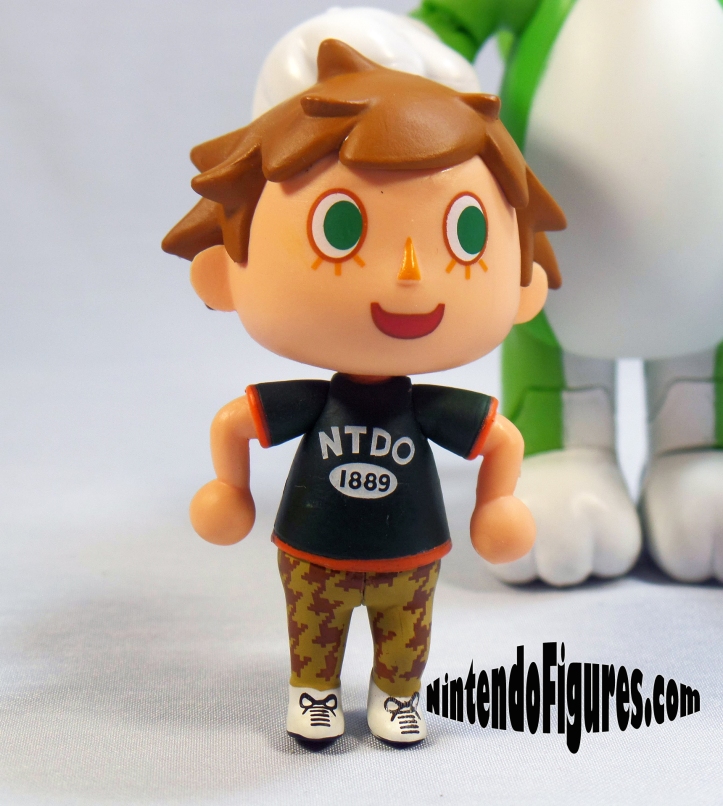 Inability to Stand – When I saw Villager at Toys R Us, I thought why not check out this figure and see if it is worth owning.  With only the Villager Amiibo as an alternative, Animal Crossing fans deserve other figure options and I thought perhaps this one would be a great option.  Unfortunately, this figure has a major flaw.  It does not stand up at all.  This is a problem with some Nintendo Micro and a few other 2.5″ inch figures but this is the worst I’ve seen.  What makes it especially bad is even with tiny feet, Jakks Pacific designed one of the feet so that the heel isn’t even on the ground.  This is poor design with such a top-heavy figure and you’ll notice I enlisted the help of Cat Luigi in many of the pictures because I could not get Villager to stand up even on a totally flat surface.  If you have any intention of displaying this guy, I think you will have to get a stand of some kind or be creative to keep Villager from falling over.

Articulation – A while back, I reviewed mostly 2.5″ Inch figures but that has certainly dwindled in recent months.  One of the reasons I stopped buying many 2.5″ inch figures is that their articulation is very limited and they aren’t as much fun as their larger 4″ Inch counterparts.  Villager is better than some figures because his head rotates and so do his arms.  Unfortunately, the arms on this figure are really strangely designed.  They are essentially sticking out so it is nearly impossible to achieve any basic poses you might expect.  I tried a couple different options and didn’t really like any of them.  With such a simple figure, it is disappointing how weirdly the arms were designed.  They really have no practical use and even in the packaging they look slightly odd.

Design and Paint – One of the tricky things about making a Villager figure is that every person customizes their character’s clothing, eyes, and hairstyle however they want.  That limits the appeal of a Villager figure because it is almost impossible that a Villager figure looks like your character does in Animal Crossing.  Jakks Pacific chose a fairly good design that stands out from the Amiibo.  I like his shirt and shoes in particular.  The camo pants I am less keen on and wonder how many people used those in game.  While these are definitely the strengths of the figure, there is the usual factory code number on the back which is very visible.  Even worse, my figure had glue on his head in a place where I wouldn’t have noticed it before buying.  I got some of the glue to come off but you can still see a fair amount of it on his hair.  This is one of the worst issues I have had with a World of Nintendo figure which makes a disappointing figure even worse.

Closing Thoughts – While there are some nice touches in the design, overall, this figure can only be described as disappointing.  A figure that can’t stand up is not appealing to a child, let alone a collector and as a result, I can’t recommend Villager to anyone.  Animal Crossing fans deserve better than this and I can only hope that Jakks will turn this into a 4″ Inch figure (or make a completely different Villager like a female version) and correct the many flaws this figure has.