This is an unusual article because it is part news and part editorial.  If you haven’t heard or noticed in stores, World of Nintendo prices are indeed rising but not everywhere.  Strangely, there are two main culprits.  The big one is Toys R Us who has increased prices across the board on all World of Nintendo figures.  To a lesser degree, there is also Shadow Link which got released a couple of months ago.  In this article, I will discuss why I think this is a bad move for everyone involved.

The first thing to acknowledge is that we don’t know the specifics for the price increase.  Perhaps the cost of production has gone up or to keep World of Nintendo going strong a price increase is needed.  However, this seems odd considering where the increases are happening.  The first is Shadow Link which is a Spencer’s Exclusive figure and costs $20.  Exclusivity is a funny thing and it can lead to higher prices since there is only one place that can sell it but I think we can all agree that nearly double the standard price for a regular figure is a bit.  Thankfully, Shadow Link is one of the only World of Nintendo figures to have a dramatically higher price than other figures of the same size.  While as collectors, none of us have been excited about this change, it is something we can live with because only one figure is affected.  Shadow Link is relatively easy to skip if you don’t like the higher price since it is basically a repaint. 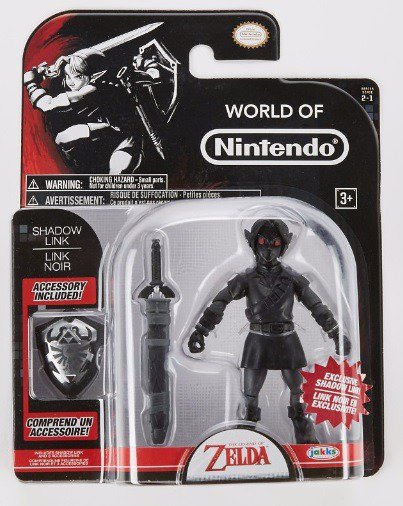 And if that were the only price increase, most of us wouldn’t complain.  The issue and what is puzzling is that Toys R Us has increased their prices by $1-2 so 2.5” figures are $7 and 4” figures are $13 and are now the same price as an Amiibo.  As far as I can tell, GameStop, Walmart, and other retailers have maintained the same price.  Based on this, it is tempting to think that Toys R Us is who is increasing prices and not Jakks Pacific.  While it would be easy to condemn one or both of them without all of the facts, I think instead it is important to talk about the negative effects on World of Nintendo as a whole and why we can hope this is only temporary.

Toys R Us has been and will probably continue to be the best place to buy World of Nintendo.  They carry all of the products Jakks makes and they usually have the best selection and the most figures in stock.  It is true that Walmart and Walgreens get exclusives but overall, Toys R Us is the still the best place to go to get World of Nintendo.  So when the best place increase their prices, what will happen?  Less people will buy the figures.  $7 feels like a lot of money for the 2.5” figures which have little to no articulation.  While the 4” figures often have a lot of plastic for your money, they lack and detail that other figures have and don’t always have the best or most interesting poses.  If you were to ask me to choose between a $13 Amiibo I wanted or a $13 World of Nintendo figure I also wanted, I’d probably give the edge to Amiibo since they tend to be slightly higher quality figures.  I think Toys R Us and/or Jakks are asking collectors to potentially make that decision and it is a dangerous game they’re playing.  Alternatively, kids who are also likely large consumers of World of Nintendo may not be allowed to buy World of Nintendo or certainly cannot buy as many figures because their parents don’t want to spend the money or feel like the toy their child wants is overpriced.

For me, the price increase will make me be more selective about what World of Nintendo figures I buy.  I love reviewing them and I’ve built up a nice little collection, mostly by picking and choosing figures that I really like or that I think would be interesting to write about.  I will be taking less chances because of the higher prices and possibly more likely to buy premium figures like Figma and Nendoroids because when you think about 3 lower quality World of Nintendo figures equal the same as a high quality, excellent accessories, and highly poseable figure, it is that much more tempting to just get the higher quality figure you’re more confident that you will enjoy.

It will be interesting to see what happens with World of Nintendo going forward and I’m afraid the price increase at Toys R Us are going to hurt sales there and of World of Nintendo overall.  I can only hope that Jakks and/or Toys R Us will reconsider and lower the price at some point in the future.  Even if you’re angry, frustrated, or disappointed by the price increase, I encourage you to be respectful in voicing your criticism towards Toys R Us and/or Jakks Pacific.  They won’t listen if we seem loud or extreme and as I have mentioned before, we don’t know the real cause of the increase so we should not jump to unfair conclusions.  I think Toys R Us and Jakks Pacific will get the message through lower sales in the near future.  Perhaps if they hear it from consumers as well as see a drop in sales then we might see change.

I’ve had my say, what is your take on the price increase?  Does it affect how likely you are to buy World of Nintendo figures?  Let us know in the comments below!