One of the funny things about Star Wars is that when a new movie comes out, a lot of the characters get leaked by companies who make products based on that movie.  This means you end up buying figures blind because the figures are often released at least a weak or two before the movie hits theaters.  Some characters may be awesome in the movie and others may be barely seen.  A lot of collectors saw Captain Phasma’s awesome design and knew Gwendoline Christie from Game of Thrones and assumed she was going to be a pivotal character in the Force Awakens.  This made Phasma a really hot figure for a while until people saw the movie.  Let’s just say, hopefully she will get a bigger role in the next movie.  Regardless of initial disappointment, the character has a great design and is unique as a kind of Stormtrooper captain.  For me, this was a figure from Force Awakens I had to have and I was pretty excited to get Phasma and see if the streak of excellent S.H. Figuarts figures can continue or not.  So without further ado, let’s take a closer look! 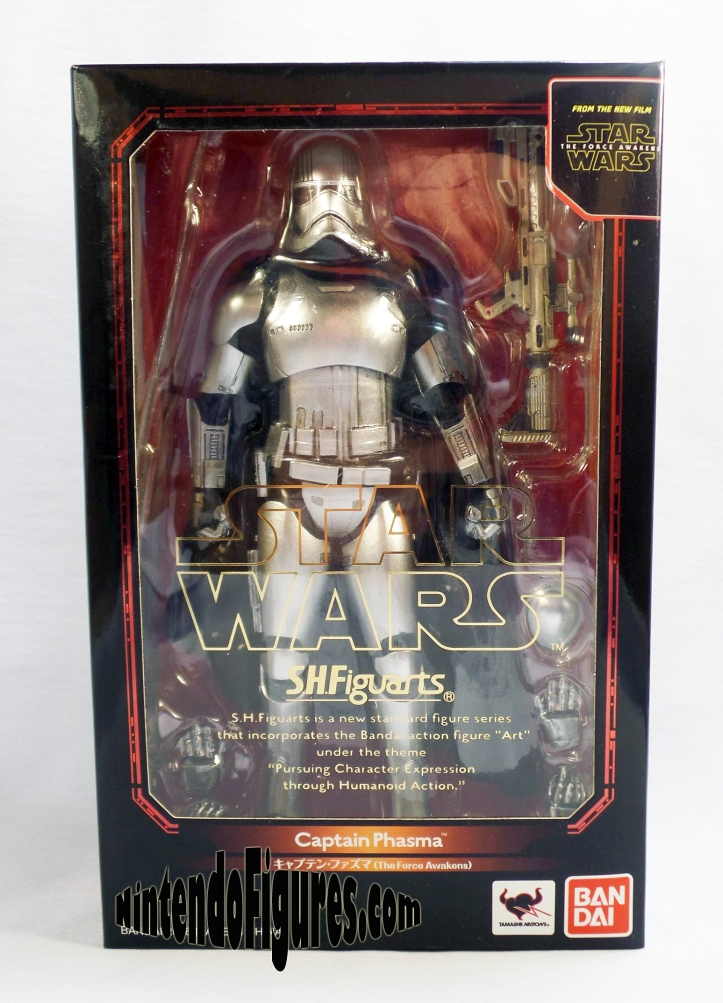 Box –As always with S.H. Figuarts, I like to show off the packaging because it is so well done.  There is no space wasted and you can see exactly what you’re buying from the outside.  Comparing this to other Bandai figures, there is also a bronze metallic trim on the front of the box instead of the silver for the other figures as well. 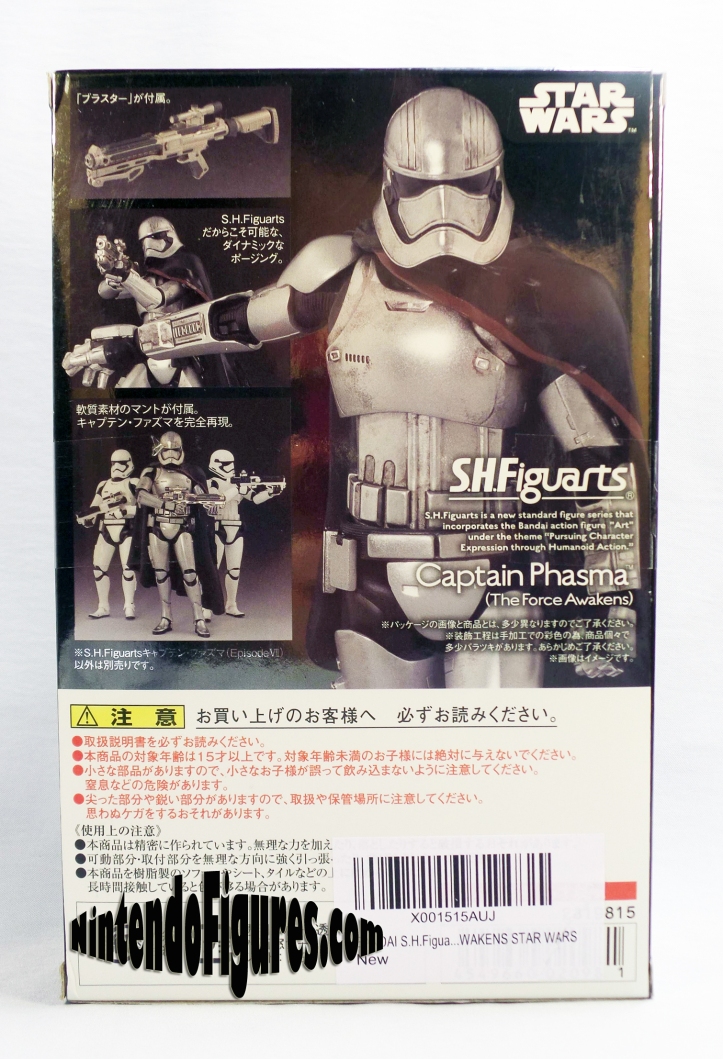 Paint and Design – As I mentioned in the introduction, one of the greatest draws to the character is taking the stormtrooper armor which looks cool on its own and making it metallic.  This not only makes Captain Phasma stand out in a squad of stormtroopers but also look pretty imposing.  The one thing that many people wanted and have criticized this figure for not having is a dirtier look to the metal.  In fact, promo shots of the figure show Phasma has having a more worn look to her armor when in fact the figure actually looks pristine.  I can understand why people are upset about this and I think Bandai should have advertised this figure differently so the promo pictures match the end product.  With that said, the pristine armor of Phasma still looks great and this is a sharp figure that is sure to stand out in your Star Wars collection.

Accessories –One of the weaknesses of this figure is that Phasma has a limited amount of customization despite having around the usual amount of accessories for an S.H. Figuarts.  Captain Phasma comes with a cape, her rifle, a shoulder pad, and three sets of hands. 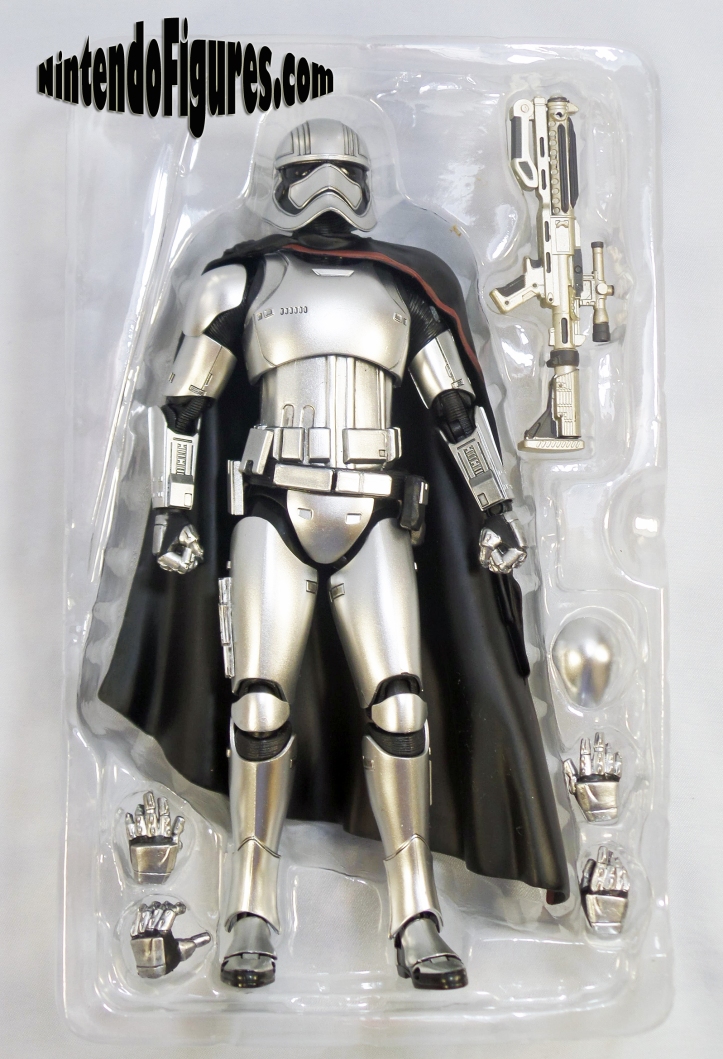 Since I somehow have managed to only buy Star Wars figures with melee weapons, I was pretty excited to get a figure with a blaster.  The rifle has a really nice gold/silver color that makes it stand out against Phasma’s metallic armor.  The rifle also has nice details and is a large and fairly chunky weapon compared to the lightsabers I’ve grown used to.  Phasma holds the rifle relatively well and there are some different poses you can try out with it though it is less versatile than a lightsaber overall.

The cape and shoulder pad accessories are related in the sense that Phasma will either have one or the other on at all times.  The cape is the standard display out of the box and it is easy to see why.  It looks great and helps fill out Phasma’s villainous form.  The cape is less heavy than Darth Vader’s cape and so Phasma is slightly easier to pose though you do have to balance her weight carefully since one side tends to be heavier than the other.  While the cape can easily be removed by taking off Phasma’s head and then removing the cape, it looks off as you can see in the pictures below.  The gap between Phasma’s head and shoulders is just too much and it looks really odd without some deliberate posing like in the second picture below.  That makes it all the more surprising that Bandai gave us a shoulder piece that can be popped on to go over the shoulder that is normally covered by the cape.  I really doubt I would ever pose Phasma without her cape so the shoulder pad, while a nice idea is pretty useless.

The set of hands we get with Phasma are pretty standard so I won’t discuss them in great detail.  The gripping hands hold her rifle pretty well as you would expect.  The fisted hands are also a staple with Bandai Star Wars figures but they are very helpful with an uptight, authority figure like Phasma.  The open/splayed hands are less useful and I used them mostly for moments where Phasma is ordering her troops.  So overall, the accessories are fairly effective and certainly help you achieve the kind of poses that you expect with this figure as long as you have the right expectations for this figure.

Articulation – Overall, the articulation is good on this figure and on par with any of the other S.H. Figuarts figures I have reviewed.  The only small limitation is the cape which as I mentioned already does make balancing slightly harder.  The rifle is also large enough that I found it somewhat challenging to get it in many different poses as well.

Normally I like to show off some of the more iconic movie poses for the character I am reviewing here and unfortunately, Phasma really does not have almost any.  The closest I could get is an image where Phasma is walking with her rifle towards the viewer which you can see below.  I don’t think it looks perfect but it at least captures some of what makes the character’s design look cool. 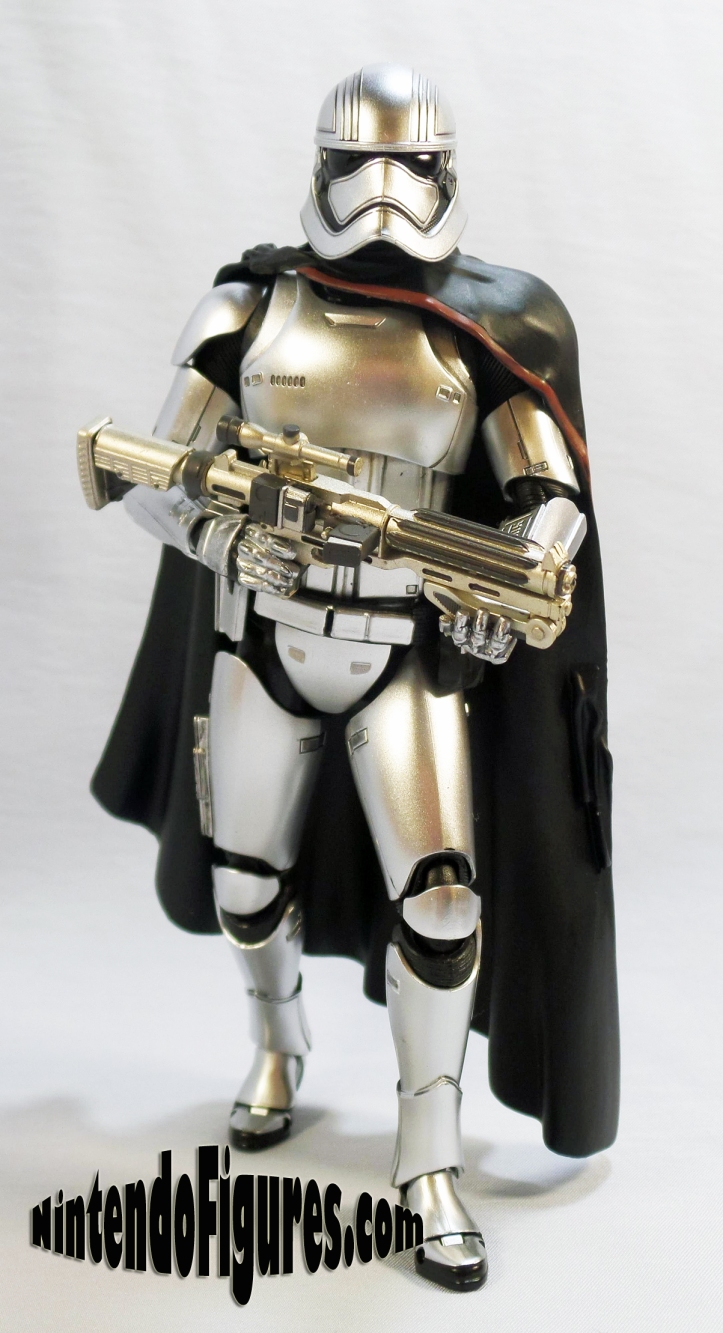 The posing options on the whole are a bit more limited with Phasma and I definitely feel like I have fewer poses and pictures to show off than in a normal Bandai review.  That does not necessarily mean this is a bad figure but it does mean you should expect to have similar problems and that this isn’t one of the most flexible or dynamic figures in this line.

Size Comparison – The other criticism of this figure that many reviews have mentioned (and indeed, this is a problem with this figure line) is the figure scale.  Phasma and the actress who plays her are both pretty tall.  And yet, this figure does not tower of the Riot Trooper which should be a person of average height.  If accurate scale matters to you, then Phasma and S.H. Figuarts will be a disappointment because it doesn’t seem to be a point of emphasis here.

Closing Thoughts – Captain Phasma is a good figure with a great appearance.  The posing options are a bit limited and perhaps the character is not all that inspiring outside of her design but Phasma is still a solid buy.  Unless you love the character or Force Awakens, she shouldn’t be one of the first figures you buy from this line.  In fact, I envision her being in charge of some stormtroopers in a display once I have acquired enough of them.  If you have the money and interest to assemble a Stormtrooper/First Order Squad of villains, you should be able to make a great display.  There is no doubt in my mind that Phasma (even if a bit short) will look imposing on the front lines.  As I build my collection, I look forward to bringing this idea to life and showing how good Phasma can look in charge of your stormtroopers!