Ever since I purchased the PDP Donkey Kong Amiibo Display, I’ve been eyeing a figure that I thought would compliment it perfectly.  After waiting for a deal for quite some time, I finally broke down and picked up this figure for $9 on Ebay.  That is pretty much the normal price online and this figure came out quite a while ago now so it seems unlikely to go down in price anytime soon.  While there are some retro or 8-Bit figures of Mario out there, a retro figure of Donkey Kong is something that is pretty rare and unique.  Is this a figure for old fogies like me or would it appeal to any Nintendo fan?  Let’s take a closer look!

Box – The Donkey Kong figure comes in a fairly unique box design that features a kind of dull gray background.  The highlight is the retro picture of Donkey Kong that is on the front and back.  This iconic pose is something anybody who has played Donkey Kong will recognize.  More importantly though, when you see this image on the packaging, would you assume that this figure can match this pose and therefore is articulated?  I know I certainly did and so it is important to discuss the articulation of this figure. 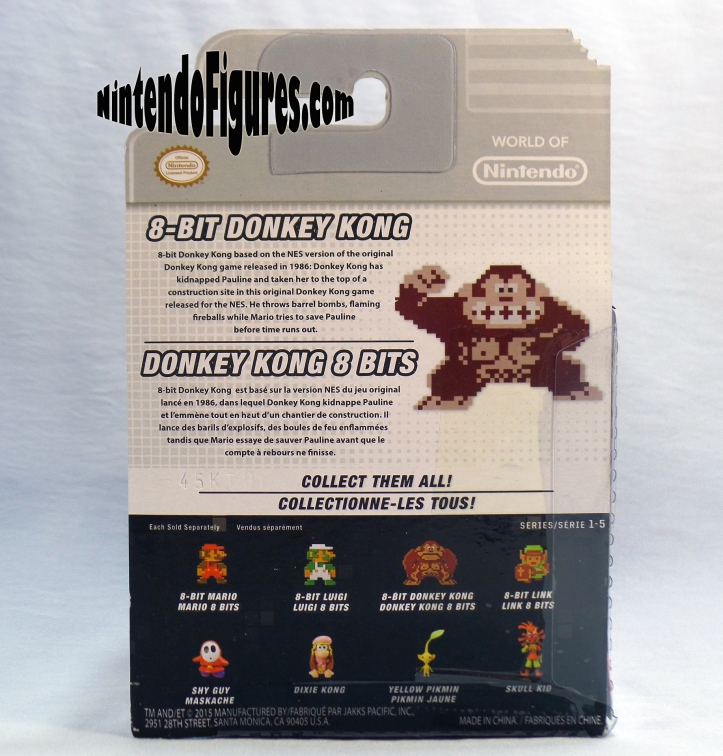 Articulation – Shortly after opening this figure, you immediately recognize that, unfortunately, this figure is not articulated at all.  What you see in the packaging is what you get and while the pose is pretty good, I do think the images on the packaging would make many people assume they can at least move Donkey Kong’s arms up and down.  Unfortunately, that is not the case and the lack of articulation is surprising and certainly a weakness of this figure for many consumers. 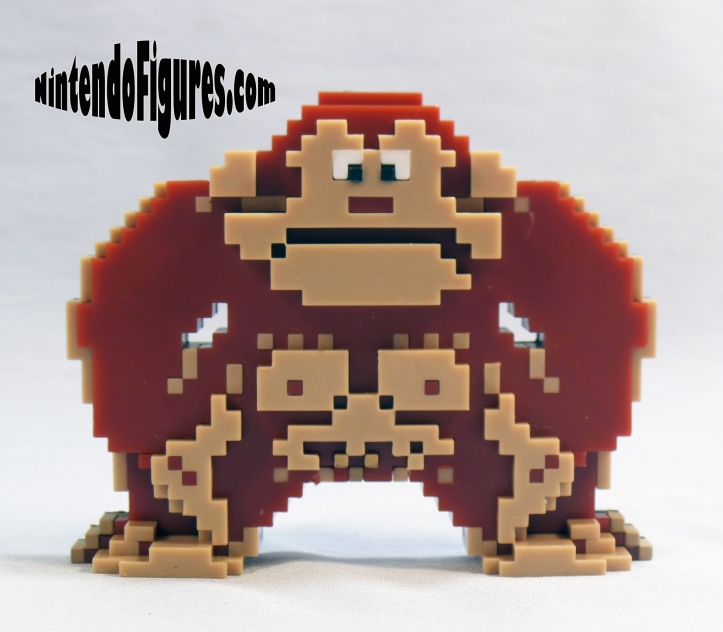 Paint – So if the figure is not articulated, it better at least have a good paint job, right?  I would say that it is generally pretty solid though there are a few signs of “stress” on the plastic on my figure.  I assume this comes from assembly because it does not look like paint.  The colors look good on this figure and while in pictures it looks brighter in others, this is because of the amount of lighting I use and the figure is thin enough that light can almost shine through it and make the figure look lighter than it really is.  The 3D design or and 8-Bit style really works well on this figure and makes it pop in real life.  Just don’t expect to look at the figure from any direction other than the front.  The back is completely bare other than the copyright date.  Overall, this is a nice display piece for the price and it has about the normal amount of paint issues for a World of Nintendo figure. 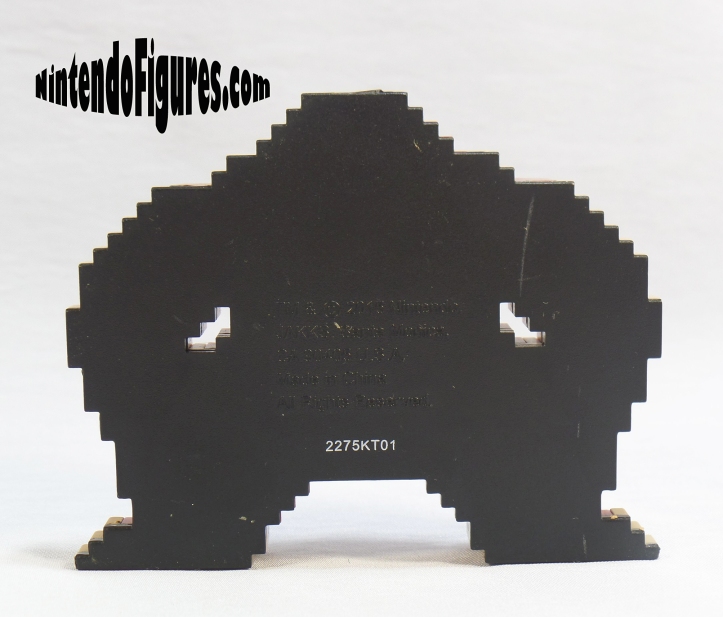 Size and Display Options – Donkey Kong is on the large side for a 2.5″ inch figure but is well short of the 4″ figures too.  This makes him a nice size for a desk or shelf display.  There are plenty of other World of Nintendo 8-Bit figures you can pair Donkey Kong with as well including Mario, Luigi, and Link.  I ended up trying out Donkey Kong on the PDP Donkey Kong Amiibo Display in the picture below and I was pleased with the results.  Donkey Kong looks perfectly at home on it and all you need is an 8-Bit Mario and you have your own old school Donkey Kong display!

Closing Thoughts – While younger Nintendo fans might not remember or have played Donkey Kong which was originally in arcades (or even Donkey Kong ’94 which was an update/fresh take on the original game), anyone can appreciate the simple and cool design of DK in his angrier and more villainous form.  This is a simple figure with a few paint issues and no articulation which takes away from the value a bit but if you’re lucky enough to find this for its original retail price of $5-6, it is certainly worth it.  I’m happy with the $9 I paid and I think this is another great figure idea from Jakks Pacific that gives Nintendo fans something a little different for their collection.  We can only hope they will expand their 8-Bit line further in the future.