If there was a star of the Force Awakens, Kylo Ren was it for most people.  His tortured existence and faux-confidence made him very interesting to watch on screen.  That awesome lightsaber design didn’t hurt either!  So with such a great design, he deserves a figure to match and I’m happy to say that Bandai has delivered yet another quality figure.  While Kylo isn’t perfect, this figure has a lot of great features so let’s jump in and take a closer look!

Box – Kylo Ren features the bronze metallic trim on the front that all Force Awakens figures have and is in a bigger box like Darth Vader.  Other than that, it is the quality packaging you expect from Bandai and the pictures on the back really serve to get you excited to pose this figure. 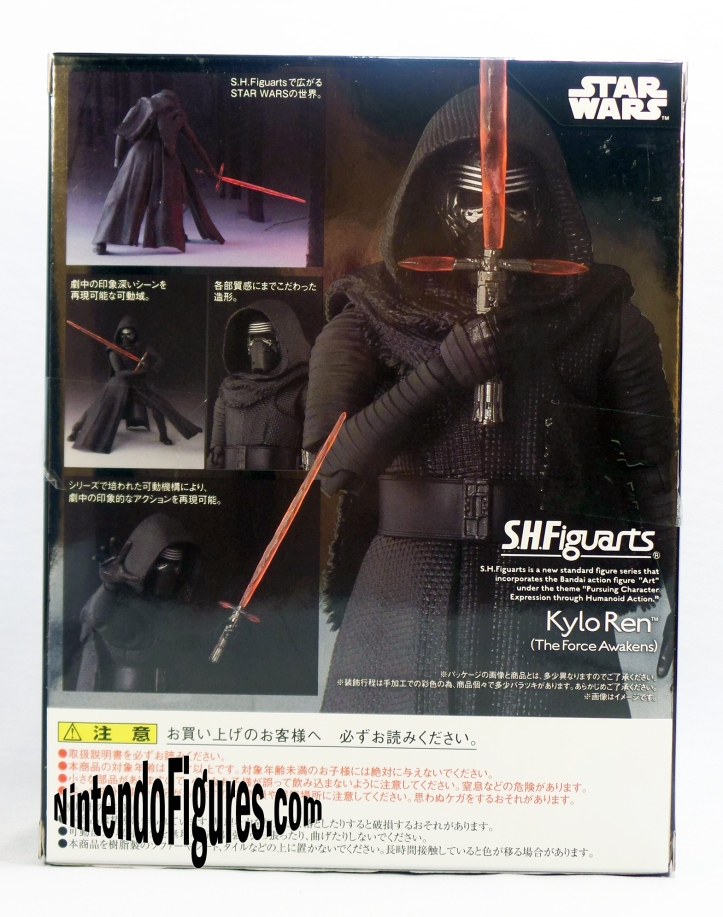 Accessories – Kylo Ren certainly has his own fair share of accessories that give you a lot of posing options.  The main draw is the lightsaber which replicates the movie version very well.  I like how long the blade is and I think this blade looks better in direct light than some of the previous ones I have reviewed.  It is easy to get Kylo Ren to hold the blade and the only difficulty I had was getting him to hold it in two hands.

The reason for this is that some of the hands do not fit on the ball pegs in the arm that well.  This has happened with other Bandai figures I have reviewed and it can be fixed with hot water if you have the same problem.  Other than this issue, the four pairs of hands work well and I appreciated getting a pair of force hands and a pair of hands that look like Kylo Ren is giving orders.  You can see both of these in the pictures below and I definitely found them useful and enjoyed creating a variety of poses.

As with previous Jedi figures, you do go an unignited version of the lightsaber for Kylo Ren to hold or one that can be attached to his belt.  The one that goes on his belt is a pain to attach so that was a bit disappointing but otherwise, these lightsabers serve their purpose and are accessories that are nice to have even if you’re not likely to use them a lot. 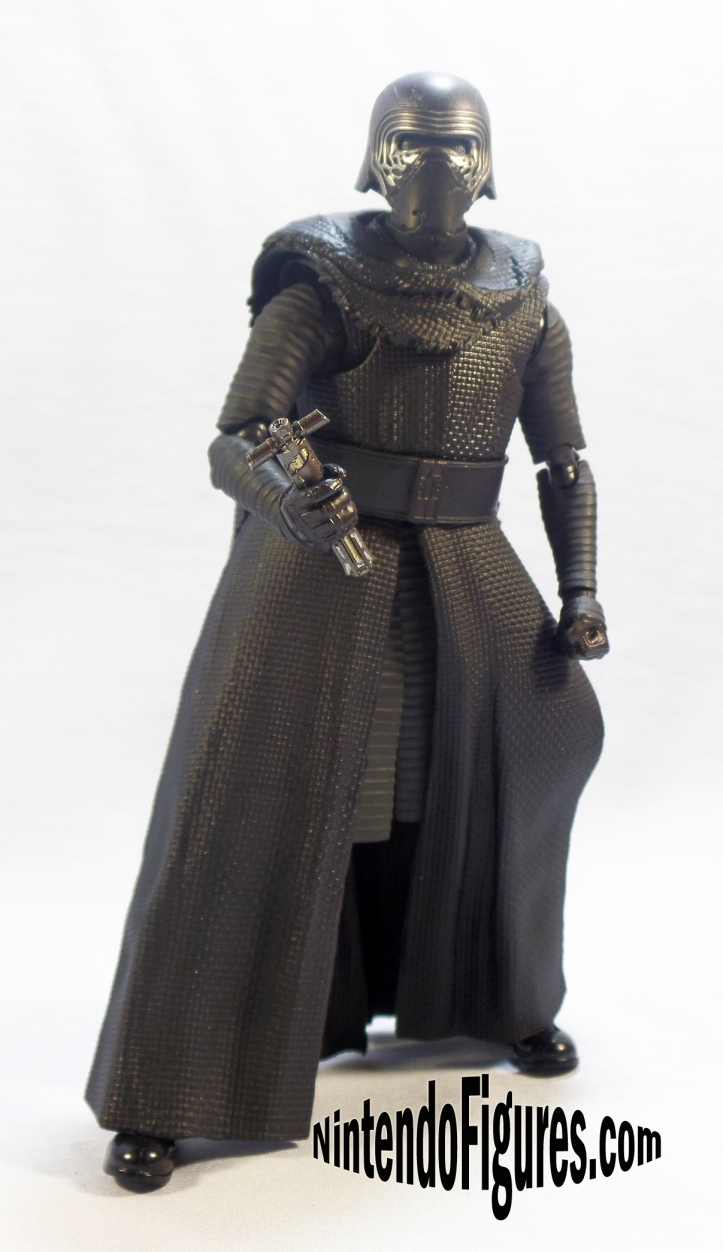 While not exactly an accessory in the traditional sense, you surprisingly can take off Kylo Ren’s hood.  It just pops off along with the head and then the head can be reattached.  Unlike other figures where you can remove a major part of the figure, Kylo actually looks good without the hood.  I only took a couple of pictures without it because I discovered this late in the picture-taking process but I’m really happy the figure is so versatile.  The only disappointment is that it is really hard to get the head and hood back on once you’ve removed them.  It took me four or five tries to re-attach them because it is such a tight fit.  I wish Bandai would have made this easier because I honestly feel nervous about removing the hood in the future since it was such a pain.  This defeats the purpose of allowing us to remove the hood in my opinion though I know Bandai could have just as easily not given us the option.

Articulation – As I will discuss later, this is a pretty tall and thin character both in the movies and in figure form.  That does affect articulation a bit.  It is harder to achieve realistic looking poses with Kylo’s arms and legs because they are long and thin.  I actually took some pictures for this review I was excited about and when I looked at them more closely, I realized how stiff and unnatural they looked.  Kylo Ren is not unlike Captain Phasma in that he is hard to balance as well.  It isn’t because of a cape though and has more to do with his long and thin legs.  My figure feels just a little bit loose which doesn’t help either.  It never made posing impossible but I did have to be more careful and patient as I tried to pose Kylo than with other Bandai figures.  Normally I try to recreate movie poses but I found plenty of cool ways to show off this figure on my own this time.  I think that is a sign that this figure is very poseable and I know I had a blast taking pictures for this review.  I ended up having to cut myself off at a certain point because I was taking too much time posing! 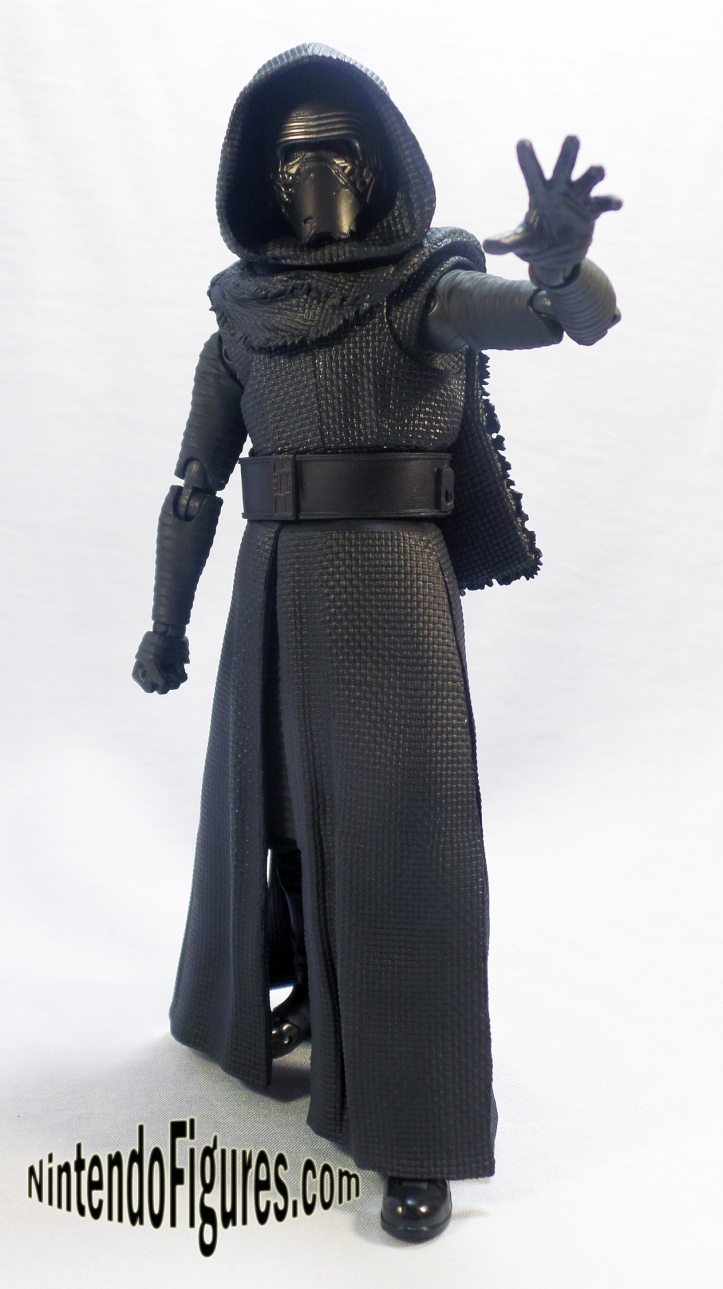 Details – One of the things that stands out on this figure is the plastic cape and hood.  The texture on the cape is excellent and really captures the look from the movie.  I’m sure that some figure fans out there would prefer a soft cloth cape instead of a plastic one and I can understand that.  I will only say that I don’t mind the plastic at all on this figure since it looks so good.  While I already mentioned how hard the hood is to get back on, the other issue is that the bottom of the cape does not look as good when Kylo’s knees or legs are bent.  This is where a soft cape would have really helped though I think the texture of the cape is so well done that it is hard to complain.

The other detail I find a bit weak is the belt.  It just looks a little cheap to me and it feels like it is slightly too big.  I really noticed this when I had trouble getting the lightsaber to stay in the belt but once I saw it, I could not unsee it.

One area where Bandai really nailed it is the helmet of Kylo Ren.  It looks just as beat up and amateurish as it did in the movie.  Kylo Ren is trying to be Vader and can’t quite match him and Bandai nailed that part of the figure well.

Size Comparison – If you’ve read my previous reviews of Bandai figures, you’ll know that they aren’t the greatest figure line in terms of having every character perfectly fit on a size scale.  Kylo Ren actually does better than average and is taller than both Phasma and the Riot Trooper.  This is what you want for any figure display and it is great to see Bandai getting some of the figure sizes right.

Closing Thoughts – This is one of my longest Star Wars figure reviews because there is a lot going on with this figure.  It does have some weaknesses, a few of which are puzzling like the belt and the difficult to re-attach hood.  However, the upsides far outweigh them and this is a character that people love.  If you like the Force Awakens or Kylo Ren then this figure is definitely recommended.  You will have a lot of fun posing Kylo and the figure is very true to its onscreen counterpart.  While Bandai has already announced a second Kylo Ren is coming where he is unmasked, I still am glad I got this version and am interested in acquiring the variant figure too.  While I doubt these two figures will be the last of Kylo Ren from Bandai, I don’t think anybody will complain too much because he is going to be fun to watch in the coming Star Wars movies!