Ever since I started reviewing Star Wars figures and S.H. Figuarts in particular, I’ve only written positive reviews.  Some of my reviews have even been glowing because the figures are generally great.  They’re awesome figures and while a bit pricey, I think they are worth it and are the best mid-range (size and price) Star Wars figures you can buy.  Maybe it is because I have a little nostalgia for Phantom Menace (though I recognize its shortcomings too), I always wanted to get a Battle Droid but have been waiting to get other figures I wanted more first.  When I saw what is a relatively new figure for $40 on Amazon and having a gift certificate to Amazon is what led me to pick this up.  While this Geonosis Color version of Battle Droid is from Attack of Clones (which is my least favorite Star Wars movie by far), I was sold by the extra accessory it comes with and the Phantom Menace one does not which I will discuss later.  Unfortunately, this is by far the worst Figuarts figure I’ve purchased though it does have some strong points which I will discuss.  If this is your first Figuarts review on the site, please check some of my other ones to see why these figures are so great. 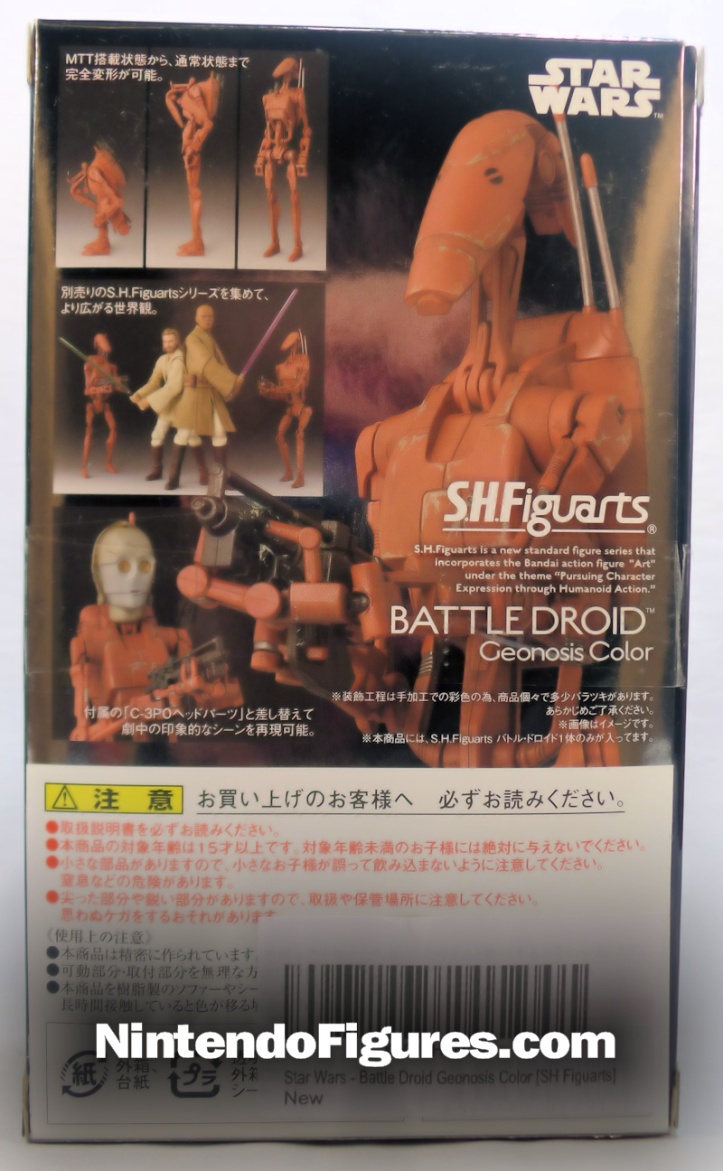 Box – Since I have shown the boxes for every Figuarts and this one doesn’t look especially impressive in the box, I’m just going to highlight the back of the box which definitely makes you get excited for the figure and it makes you want to buy multiple ones which would please Bandai greatly.  It is especially cool that this figure can imitate the way the battle droids deploy in the movie. 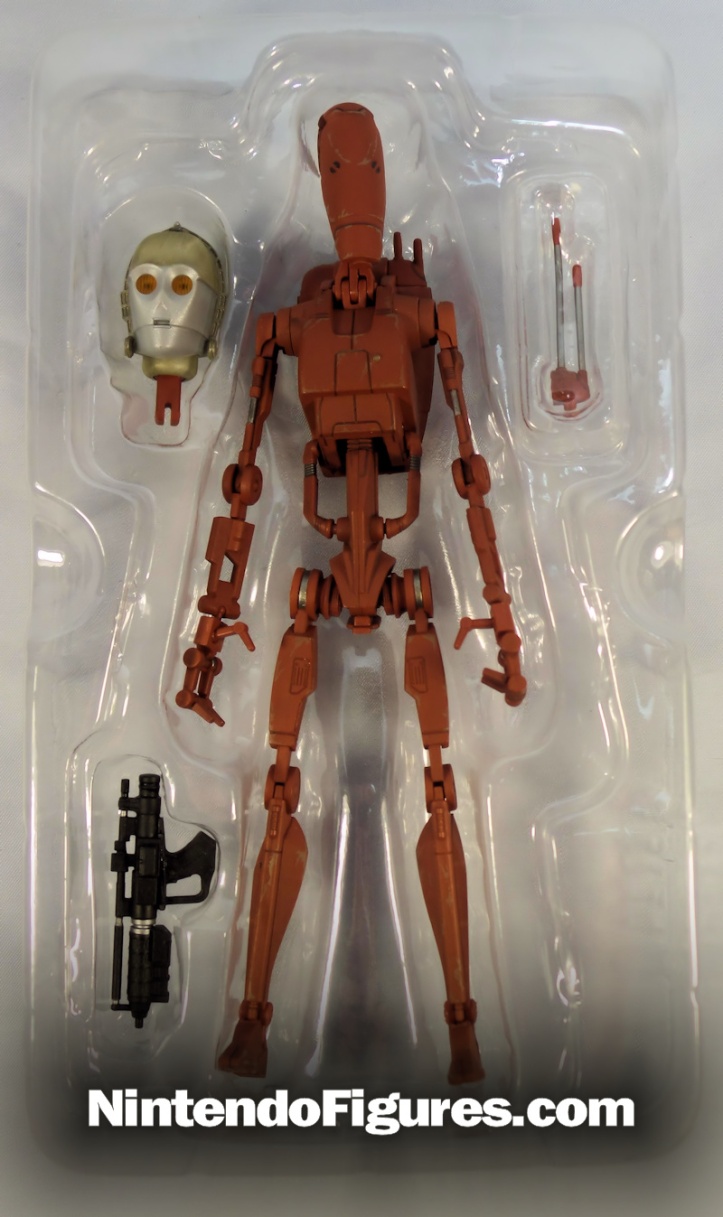 Accessories – The Battle Droid comes with a decent amount of accessories including a blaster rifle, C3PO head, and a longer antenna to go on the droid’s back.  The most exciting of these accessories is without a doubt the C3PO head which is a stupid gag in Episode Two but is surprisingly fun on this figure.  I definitely like that Bandai made this accessory and while it isn’t the shiny, golden C3PO head you’re used to seeing, it still looks really nice and gets me excited for an actual release one day in the future.

The blaster rifle looks nice and has some nice details but feels a bit small in the Battle Droid’s hands.  While I had trouble posing the figure with the gun for reasons I will describe in a bit, I found the gun to be just a little underwhelming size-wise and there isn’t a lot of room to fit the droid’s hands around the gun.  Other than that, it is a good accessory to help accent the figure.

The longer antenna is a simple but nice thing to have with this figure.  It fits well into the Battle Droid’s shoulder and looks nicer than the short antenna that it comes with straight out of the box.  The plastic on mine is just slightly bent but that can be fixed with hot water or a blow dryer and is fairly normal for small, thin plastic like this.

Articulation – For me, the issues started almost as soon as I opened this figure.  The figure is thin and lanky so that makes it hard to pose and balance and I expected that.  However, the droid’s arms can be pulled out of the elbow sockets too easily.  Even when posing the figure, you can easily pop an arm out which is frustrating.  I was even more disappointed to see that left hand is so loose that it cannot hold the gun or even maintain a hand gesture.  This made posing the figure so difficult that I only took one picture where the battle droid was holding the gun because it was too frustrating to keep messing with.  When you combine the fact that the arms fallout out of their sockets, a hand that won’t stay put, and a figure that is already hard to balance, you have one that is just not fun to play around with at all and one of the main draws of this figure line is awesome ability to pose with great details and accessories. 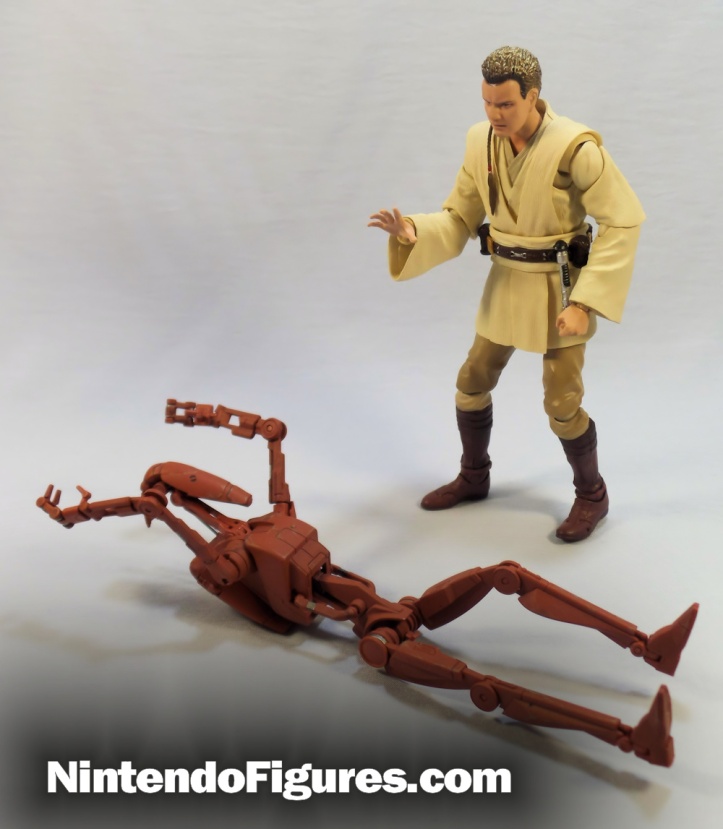 Closing Thoughts – Unfortunately, this figure was so unfun to pose that I took less pictures than normal because I grew frustrated after taking these.  That is something I cannot recall happening before on the site and I’m disappointed it happened with a $40-50 figure.  This is one I do not recommend unless you are a diehard Star Wars fan and collector.  I am certainly that way and I find this figure underwhelming and it is certainly my least favorite figure.  There are a few redeeming qualities like a nice paint job and the creative C3PO head but these are not enough.  There are tons of awesome characters already made in the Figuarts line and with many more on their way, this is one figure that many people will probably skip anyway and that is probably for the better.