If there is one game that has enormous charm and is deserving of more figure support, it is Captain Toad: Treasure Tracker.  While there are a number of amazing Wii U games, I consider this one to be one of my favorites because it is unique, charming, and a perfect way to relax while still having fun playing a video game.  When the game came out, everyone, including myself was convinced we would see Captain Toad and Toadette get Amiibo support and it never happened.  As cool as that would have been, I have an idea that would be even better and capture the game perfectly! 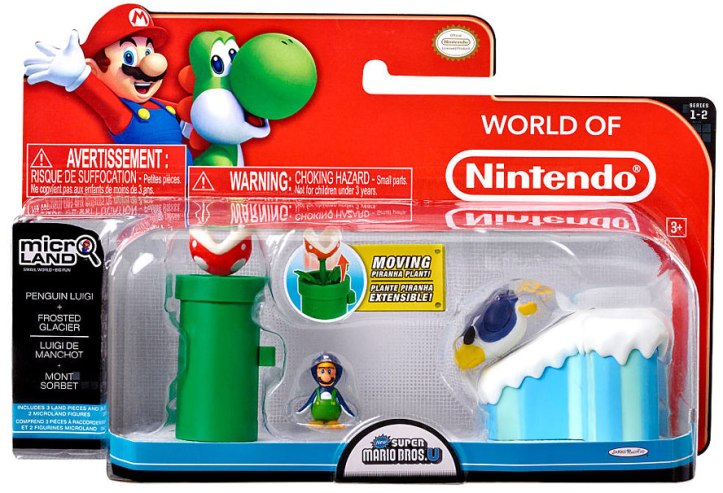 This site was founded on Amiibo and Micro World (pictured above) coverage.  While you can still find Micro World figures on store shelves on clearance and sadly not selling, at the time it was coming out, it looked really promising for Jakks Pacific.  It was a toy for kids but any adult that likes Nintendo and any kind of Micro toy like Micro Machines found it difficult to resist!  I know I was certainly that way and the more I think about it, Jakks Pacific could have combined their toy line with Captain Toad for an incredibly cool product.

The whole premise of Captain Toad is that you manipulate the camera around a tiny world and help Captain Toad escape each level.  Captain Toad is basically helpless and you have to be careful as you guide him around the world.  That is one of the reasons why the game is so charming.  With that said, Toad feels micro-sized in the game world and so do most of his enemies, so how could would it be to take levels from the game and turn them into micro-sized playsets?  While some mechanics and enemies from the game wouldn’t translate well, there are so many that could easily be a toy.

Let’s take a look at the level pictured above.  The screenshot is oddly chaotic and action-packed but it will help me make my point.  This level has piranha plants that get in your way and you have to use the cannon to eventually clear the path.  Obviously, toys that can shoot something have been made and making piranha plants that can move in and out of a slot have also been done before.  Adding these two features would make this an impressive Micro Land playset and you’d have something that is fun for kids to play with and an awesome little display you can make if you’re an adult.

As a second example, take a look at this level which has moving platforms with spikes on the side, multiple levels to navigate, and ghosts (boos) roaming the bottom level.  All of these things would be easy to recreate in Micro sized toys.  For example, the platforms could be given a slot to slide left-to-right to represent that hazard.  The ghosts could be mini figures you place however you want and then the other pieces just molded into the plastic and painted.  Just like in the previous example, you’ve got good playability and differentdisplay options to keep adult collectors interested.

These are just a couple of levels and I’m sure plenty of others could be done quite easily.  The thing about Captain Toad is so many of the characters and enemies are charming and worthy of being made into figures, I’ve only scratched the surface here.  Captain Toad is a franchise with worlds of potential.  I’m hoping we get a sequel sometime soon but regardless of that, there is no doubt that this game deserves figure support and I think a lot of Nintendo fans would go crazy for some figures from this game even after all this time has passed since its release.