While not a brand new product from Jakks Pacific, I have been seeing these Tape Racers on the shelves a lot lately and I like Mario Kart fairly well which has made me more and more curious.  With a lack of new World of Nintendo releases, it seems like a great time to see if Tape Racers are worth collecting, especially since the toy line is so new.  Let’s take a closer look at these toys and see exactly what they are and if they are worth your money. 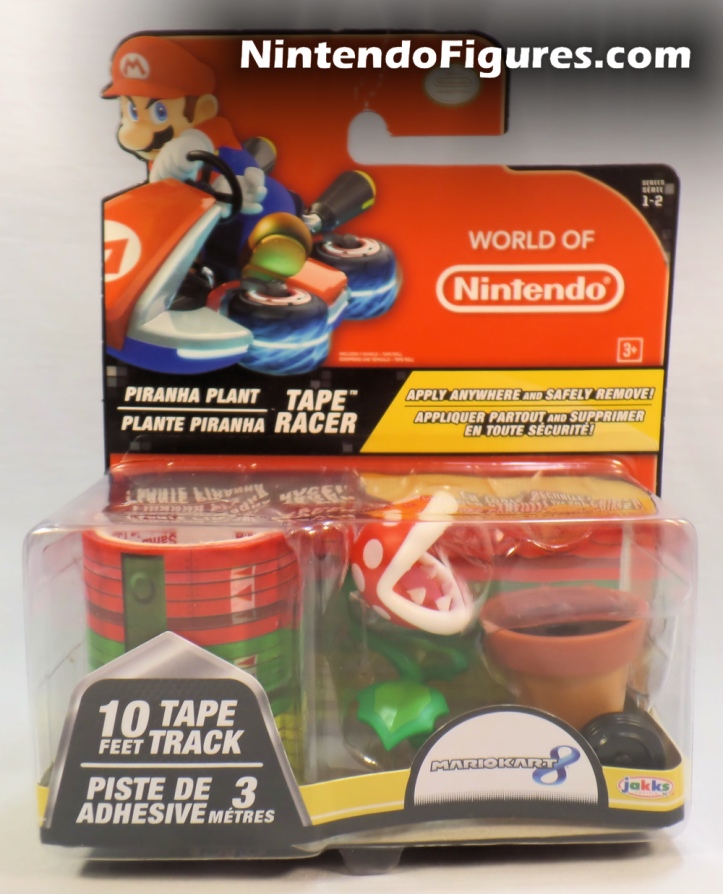 Box – The design here looks pretty similar to other Super Mario World of Nintendo figures but I appreciate that they took an image from Mario Kart.  You can tell immediately what you get in a Tape Racer too.  A figure in a vehicle and some tape.  While the overall box is relatively close to 2.5″ Inch World of Nintendo figures, these retail for around $8-9 so they do cost a few dollars more. 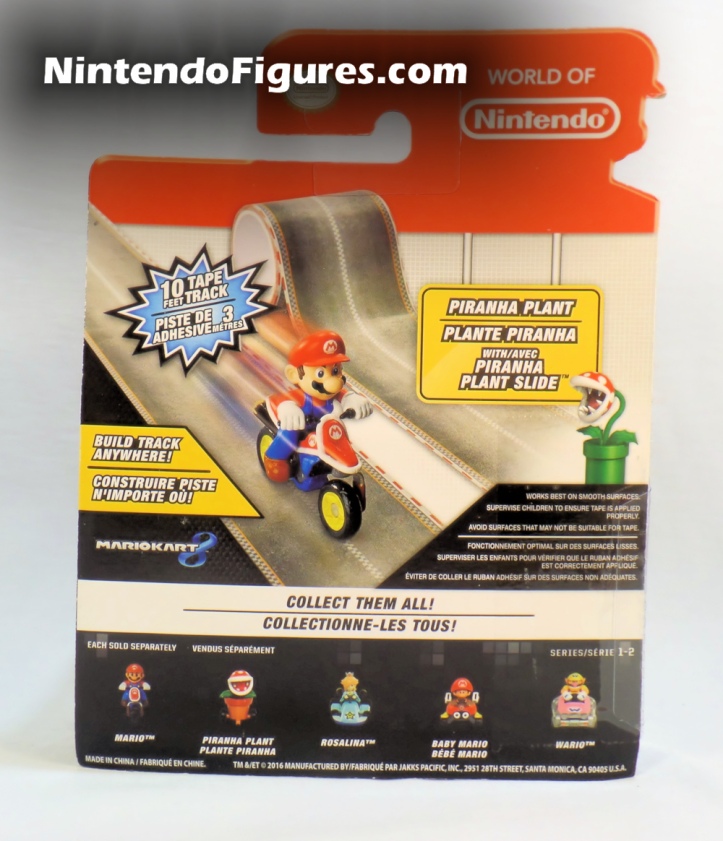 Figure – The store I purchased this Tape Racer had quite a selection of this wave including Wario, Rosalina, and Mario.  While I wanted to get Wario, the only one in store had a bad paint job so I ended up getting the oddball choice of a Piranha Plant instead.  It has been a while since I have played Mario Kart 8 but as I recall, this is a power-up you can use in the game which is quite fun.  It is interesting that a power-up gets its own figure like this but I think it works and is fun overall.  The only thing that is odd is the design of the vehicle.  It is a pot with wheels!  Not the sleekest or most aerodynamic vehicle you will ever see.  I know it comes from Mario Kart 8 and maybe I was unfair to pick this figure to review first from the line but other than the somewhat goofy design I can’t see any real faults here.  The Piranha Plant is inserted into the base and so it can be position in any direction you like, although it looks weird from the back since the wheels are then in front that way as you can probably imagine. 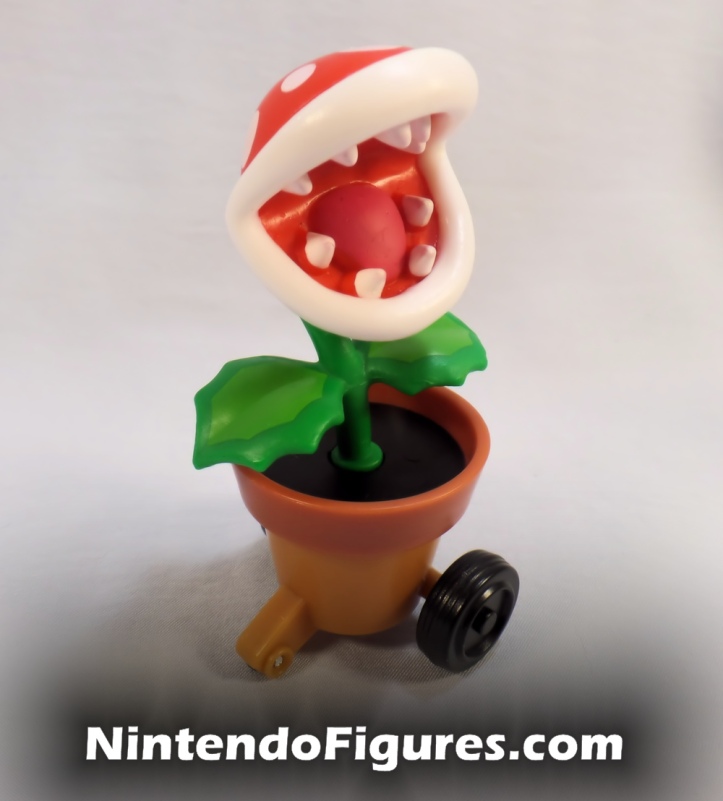 Paint Details – While the paint is overall pretty good, as is often the case, there are some problems with the white paint on this figure.  A few of its teeth needed more white paint and the red plastic is visible underneath from certain angles.  Other than that, the leaves and white spot decals look nice.  It is a simple figure but Jakks Pacific pulled off the design well. 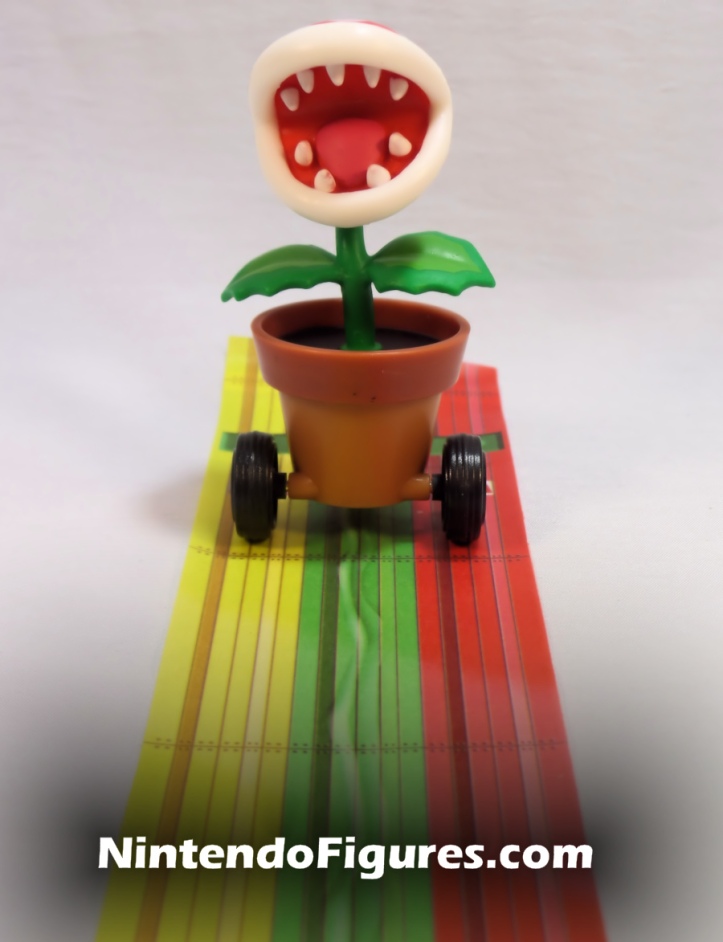 Tape – So that is the figure, what is the tape like and how does it affect the Tape Racer?  Well the tape has a nice design and each figure comes with one inspired by a different course in Mario Kart.  I can’t identify which course it comes from but it looks good.  I applied the tape to the fabric I use as a background for pictures and took a few pictures for you to see.  The tape does very little other than provide a smooth surface for the Tape Racer to roll across but it does look nice.  The big unknown is how long the tape will stay sticky.  It feels like some of the tape’s stickiness has diminished after one application and I would expect that to continue with more use.  With that said, the tape looks nice even if it isn’t all that exciting of an accessory compared to 4″ Inch World of Nintendo figures. 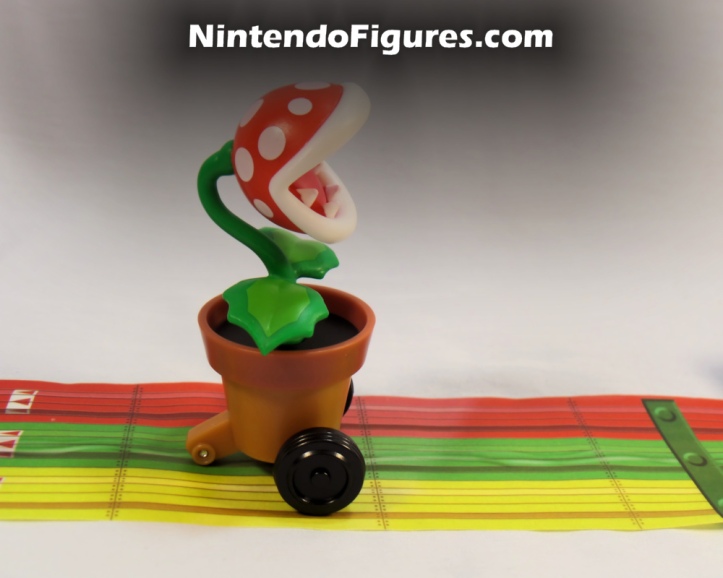 Closing Thoughts – So what do I think of this overall?  Well, it is a good product even if it didn’t blow me away.  Part of it depends on the quality of paint job you’re able to find in stores but since the Tape Racer is a relatively simple toy and the tape does not really add a lot other than a decent visual aid for the racer, I think this is probably going to appeal most to kids and not adults.  I like this Piranha Plant figure enough to feel that it is worth $8 but I’m not sure that I like it enough to collect more, especially with so many Nintendo figures coming out in the near future.  If you love Mario Kart, this is one of the few figures you will find from that game which makes Tape Racers much more appealing as well.  Do you have any Tape Racers?  What do you think about this product?  Let us know in the comments below!