There are so many options out there now for Zelda fans that it can be kind of overwhelming to know what to get.  As more and more figures have come out, I have tried to narrow my collecting focus to the Zelda games I love best. For me, Ocarina of Time and Twilight Princess are my two favorite 3D Zelda’s so collecting figures from these games is my main focus.  Obviously, when I saw the announcements for this amazing looking figure with so many accessories, buying it was a no-brainer.  I kept passing on Figma figures for Zelda and Metroid because they just didn’t seem like the right fit for me and what I wanted in my collection but this figure finally changed that.  Without further ado, let’s take a closer look at Figma Link! 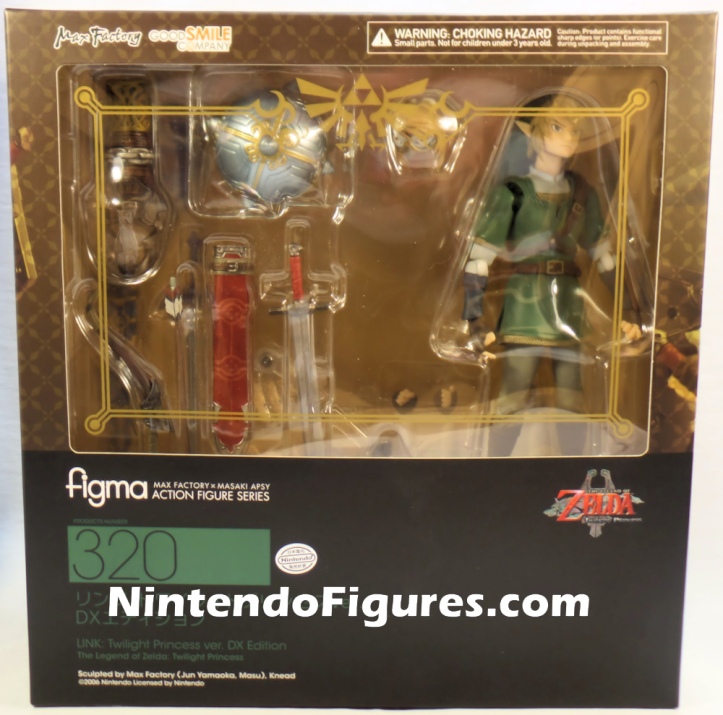 Packaging – This is the high quality design you expect from Good Smile Company and I really appreciate how it matches the dark art style of Twilight Princess too.  The pictures on the back definitely get you pumped up to open the figure so I would have to say that the design is well done.

Articulation – Because this figure is highly articulated, I’m not going to discuss everything it can do but just know that this is the real deal as far as action figures go.  Link can achieve a wide variety of poses and you’re really only limited by your imagination.  There are two small drawbacks to the design I do want to call to your attention though.  The first is the inside of the elbow which you can see in many of my pictures is noticeable and visually unappealing with Figmas.  Some figure collectors really hate this and I can see why but it doesn’t bother me too much.  It just reduces the visual appeal of the figure in some poses a bit.  The other thing is that there is a gap in the shoulders that is pretty visible in some poses with the arms.  Again, not ideal but not a huge problem either.  The large amount of articulation helps make up for these flaws and weird looking joints are hard to escape with a highly articulated figure as well. 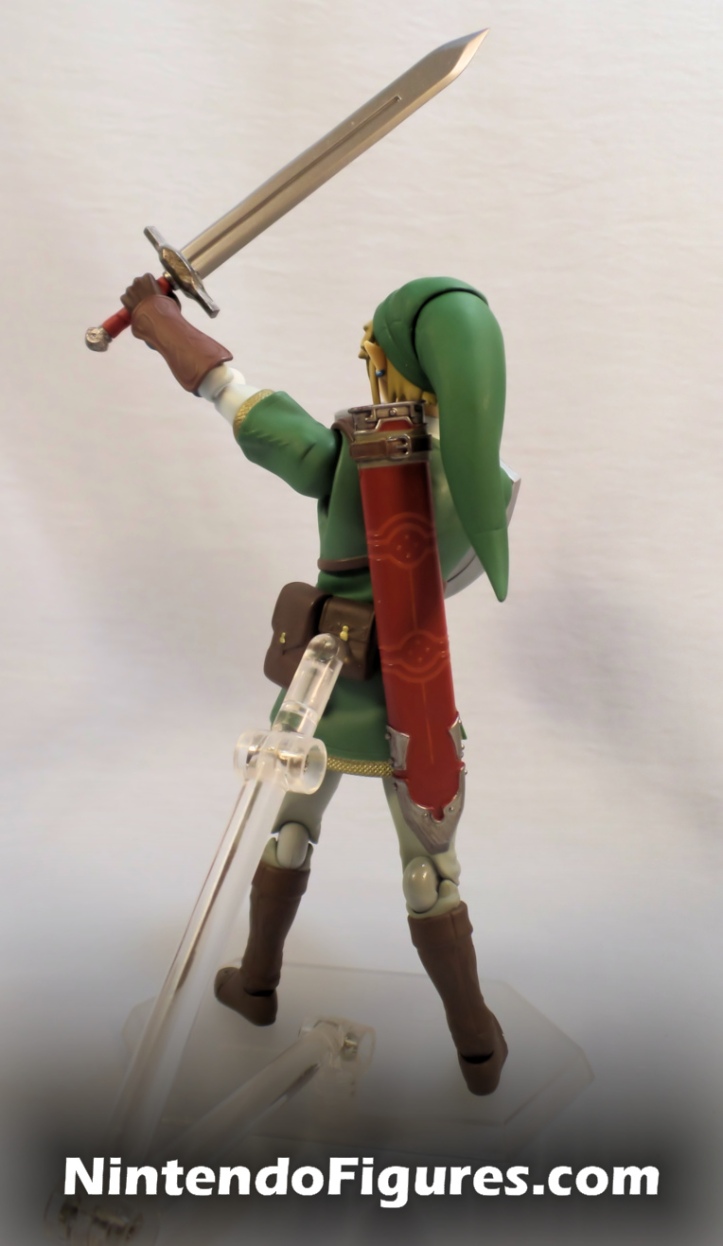 Training Sword and Sheath – Since there are so many accessories with this figure, I’m going to talk about each one.  One thing that is nice about this figure is that it comes with the beginner sword and shield, in addition to the more powerful version you get later on.  While the sword design is simple, it looks fantastic with really nice metallic paint.  The sword sheath also looks pretty darn cool and in some ways I prefer it than the standard one we see so often on Link figures.  This is probably because it stands out and is something a little different but regardless of that, I really like the look of this sheath.

Shield – Overall, the shield looks nice and has dull colors which match the art style well.  The shield is not the easiest to use however.  Both of the handles will detach from the shield to help you put Link’s arm into it.  I found that it is a bit fragile to actually get the arm in the shield and then put the handles back on it.  This does really help prevent paint transfer which is important but I don’t think it is the greatest setup from a ease of use standpoint.

Master Sword and Sheath – The design of these two accessories are things we’ve seen on many figures but they look really nice all the same.  I can’t find any faults with either one and I’m thankful that Good Smile chose to include them with this figure. 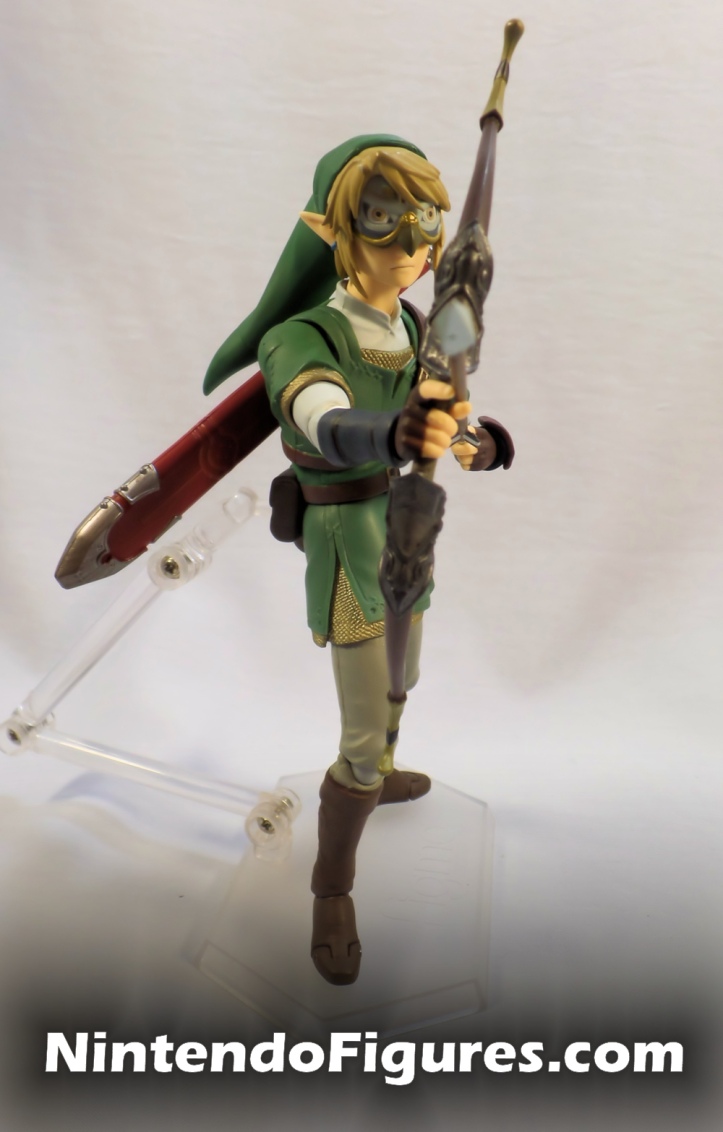 Bow, Arrow, and Hawkeye – The one accessory I expected to be a pain to use and create poses with is actually pretty easy to use.  The bow fits in Link’s hands nicely and the arrow is not too hard to fit into Link’s other hand either.  The big reason for this is the clever design of the hand pulling the arrow back.  It has a hole that the arrow fits in which helps “notch” it in place from a variety of angles.  When you add the Hawkeye mask to these accessories, you really capture the look of the game nicely and have several display options just between these accessories alone.

Clawshot – This accessory was a lot of fun to use in the Wii version of Twilight Princess and the design is awesome too.  Good Smile deserves credit for applying a fantastic paint job on this accessory.  The metal chain was also well done and makes the figure feel more realistic in hand (as silly as that sounds). To my surprise, the Clawshot fits into Link’s hand which makes it a little finicky to actually use.  It is easy to put his hand into the Clawshot and then another piece pops off and then you have to start the process over.  It is also pretty heavy and Link cannot always hold it up at certain angles either.  These flaws are a little bit of a bummer since I suspect this item will be a favorite for many people but you can still achieve some good poses even with the weight issues.

The other nice think about the Clawshot is that you can show Link firing it with the use of a second stand.  While the stand isn’t something you could hide in a display or in pictures, the Clawshot still looks very nice when deployed.  I only wish we had an enemy or something Link could be shooting it towards to add even more display options.

Ball and Chain – This was my favorite accessory from Twilight Princess and I love that it is included with this figure!  The Ball and Chain does require use of a second stand to hold it up but other than that, it is simple to achieve awesome looking poses.  Good Smile really nailed this part of the figure and it is a lot of fun to mess around with it.

Face Plates – Last but not least are the face plates.  All three are well done and cover the main expressions Link has in the game.  Serious, exerting himself, and yelling.  They work well with almost any combination of accessories though I liked the exerting himself face the best because it works in any action pose and with most of the other accessories.

Closing Thoughts – While there are possibly a few things I could criticize this figure for like a lack of a display background which is always awesome to get and a few accessories that are not fully functional (mostly the Clawshot), these are really minor complaints and when a figure comes with this much stuff, it is impossible to complain.  I’ve been a bit disappointed with every Zelda Nendoroid I’ve bought because of their limited articulation and this figure provided me with what I was looking for. Ultimately, this is my favorite Zelda figure I own and one of the best I have ever purchased. It just gives you everything you could possibly want.  I think the DX version of this figure is absolutely worth the money and the way to go if you’re considering buying this figure.