Over the last couple of years, sometimes as a video game fan and as a Nintendo fan, you have to step back and say, “Wow, I can’t believe that we live in a world where ________ exists.”  For me, that is especially true for a Cloud Strife Amiibo.  I love Final Fantasy 7, it is my favorite game in the series by far and I have always wanted figures of the characters from that game.  So to see Nintendo make one is incredible and I almost had to pinch myself when I found a Cloud Amiibo at Target last week on release day.  When you consider the rocky relationship Nintendo has had with Square in particular, it really makes seeing this figure kind of surreal.  With that said, I’m going to review this Amiibo on the strengths of the figure and not let my love of FF7 result in Cloud getting a free pass!  Let’s see if this figure that surprised us all is worth buying or not.

Box – I have to admit, the green color really surprised me and I don’t feel like it fits the character of Final Fantasy 7 very well.  It doesn’t look bad or anything like that, it just doesn’t seem especially thematic (like so many of the Amiibo boxes have).  It is rare for me to criticize the packaging of Amiibo because it is usually done so well but in this case, I’d have to say it could have been slightly better. 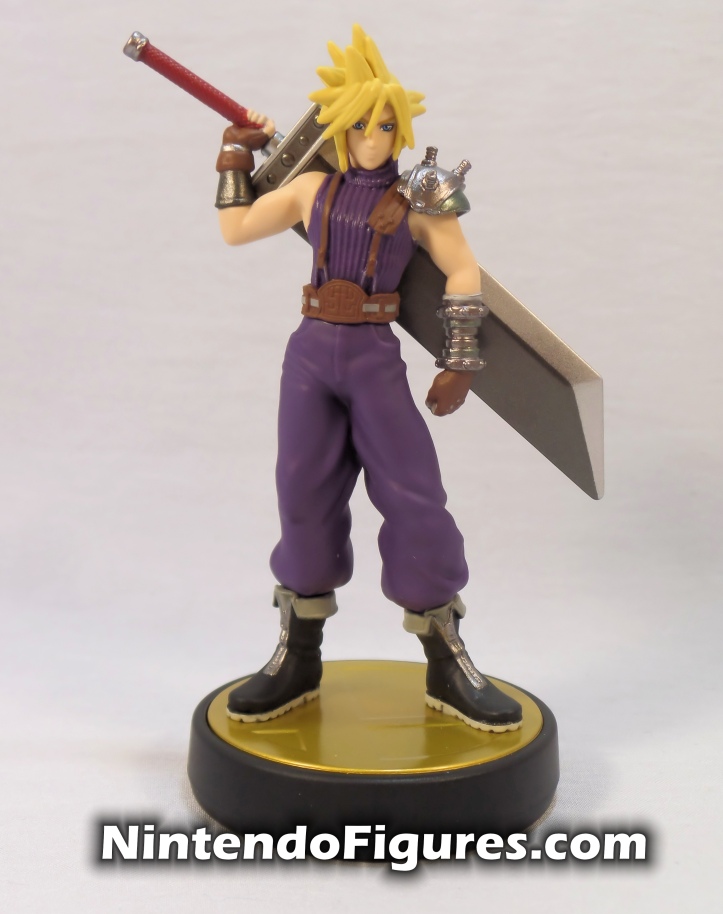 Pose – While normally I would criticize a figure for having a static pose, I really like what Nintendo chose for this Amiibo.  Cloud takes his sword out at the beginning of a battle in FF7 (unless my memory fails me) and then twirls it around when you win so seeing him possibly in the act of doing that is really neat.  He looks like he is ready to kick butt which is what Cloud does in Final Fantasy (when he isn’t dealing with memory problems anyway!).

Paint and Details – One of the tricky things about designing an Amiibo for Cloud is that he used to look like the picture above!  What looked good on the Playstation does not necessarily look great now and in fact, his outfit looks a bit simple and almost silly.  I mean it is a shoulder piece, gauntlets and a purple shirt and pants!  With that said, you can dress up like a clown and if you carry a huge sword like Cloud does, you’ll look awesome and ready for a fight!  Not to mention the fact that Cloud’s spiky hair and face are really well-executed here.  Cloud has that Japanese design that all FF7 characters had and he still looks like the tough protagonist we want in a Final Fantasy game.  Nintendo did a fantastic job capturing this character in Amiibo form and bringing an old design up to more modern standards.

Closing Thoughts – While this isn’t the most detailed or elaborate Amiibo, Cloud looks great and will surely appeal to any Final Fantasy 7 fan.  Even if you just like the character in Smash Brothers, I have a feeling this is one you will enjoy.  While this is not an Amiibo I would keep in-box, Cloud definitely will make any shelf look awesome and bring a little FF7 attitude to your figure display!