It has been fun reviewing the last wave of Super Smash Bros. Amiibo and now it is time for the last Amiibo of the six that I purchased and will review.  Cloud Player One is at least partially based off his Final Fantasy: Advent Children movie design and while I saw Advent Children when it came out a number of years ago, I can’t say I have fond memories of it.  I think the movie was a mild disappointment and lacked a solid story and the charm of Final Fantasy 7.  It is interesting to now review a figure that is inspired by the movie and looks quite a bit different than Cloud’s original design.  Is this a cool, new design that everyone should own or an Amiibo only diehard Cloud and Advent Children fans should get?  Let’s find out!

Box – Much like the Player Two Cloud, the color chosen for the packaging here is not my favorite and doesn’t match the character as well as other colors have in the past for Smash Bros. Amiibo.  This is a minor complaint though and only matters if you’re planning on keeping this figure in the box

Pose – In my opinion, one of the flaws of this Amiibo is that Nintendo did not do enough to separate this Cloud Amiibo from the Final Fantasy 7 design.  Cloud is basically doing the same thing, getting ready to grab his sword.  While I praised the pose in my review of the Player One Amiibo, it is disappointing that this one is the exact same thing.  If Cloud was actually wielding his sword that would have made this Amiibo stand out and look much more awesome.  Instead, it looks nearly identical to the other Cloud Amiibo and makes it hard to say you have to get both of these figures unless you love the character or Final Fantasy 7.

Design – While the pose is too similar, the character design of the two Cloud Amiibos are fairly different.  The first difference is how much darker Player Two is.  Cloud is wearing black exclusively and almost looks like a villain.  The one thing that I do notice is how much more modern the design looks and while having one shoulder piece and buckles on the bottom of his cape are silly, you have to admit, he still looks cool.

It is surprising to see that Cloud’s face does not look quite as good as the Player One.  His hair is also noticeably different and slightly lighter in color.  I prefer the Player One design in both respects. 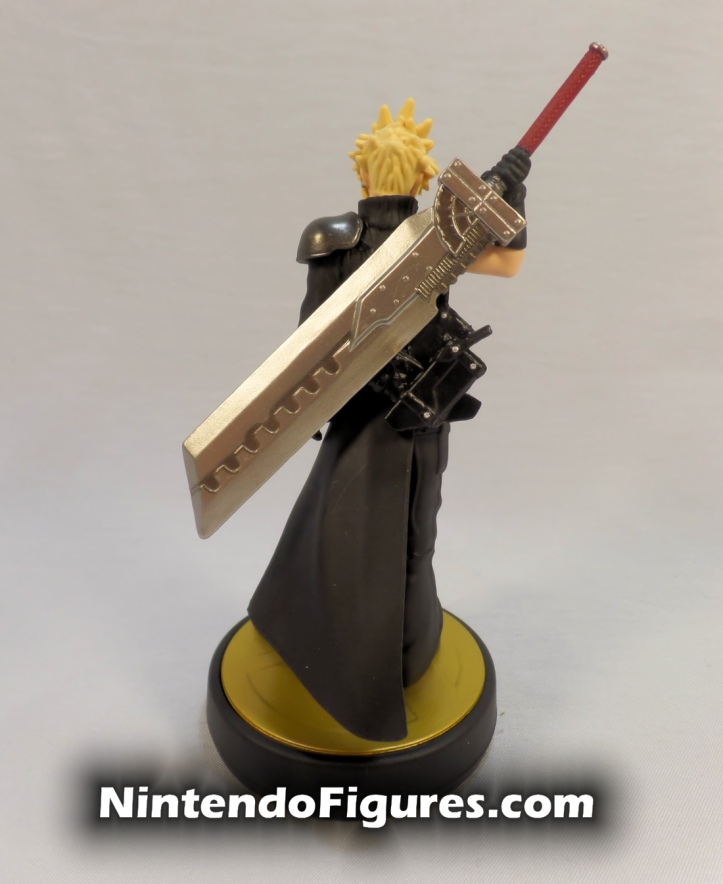 The big difference is Cloud’s sword.  I like the design of the sword but not the paint.  It is a flat color that looks too bright for a sword that sees much use where Player One’s sword has some shading to it which makes the sword really pop.  I’m surprised Nintendo didn’t try for a similar technique with Player Two.  It would have definitely make this Amiibo even stronger.

Closing Thoughts – If you don’t plan on getting the Player One Cloud and are able to purchase this Gamestop Exclusive Amiibo then I can certainly recommend buying this Amiibo.  It is a solid design with decent details and a cool, modern design.  With that said, this is probably not a character design many people have nostalgia for and if you’re on a budget, you probably just want the better looking one of the two and the Final Fantasy 7 design which is definitely Player One Cloud.  If I didn’t collect all Amiibos from games I like, I probably would pass on this figure because it is so similar and was not the easiest to find at launch but having reviewed the Player Two, I have surprisingly found I do appreciate it and think it is worth your money if you’re a Final Fantasy fan.