About a month ago, I reviewed the Movie Realization Darth Vader and I am excited to review another of these unique and fun figures.  The Sandtrooper is a character that barely got any screen time in A New Hope and yet, it has captured Star Wars fans’ imaginations.  The Samurai version of the Sandtrooper takes the already cool design and turns it up a notch and I’m excited to share my thoughts on this figure with you.

Box – Just like with Darth Vader, this is a really cool box design!  The black backgrounds highlights both the evil of the Empire and the seriousness with which these warriors take themselves.  The back doesn’t show off the coolest poses but does give you some idea of the accessories you can get which is nice. 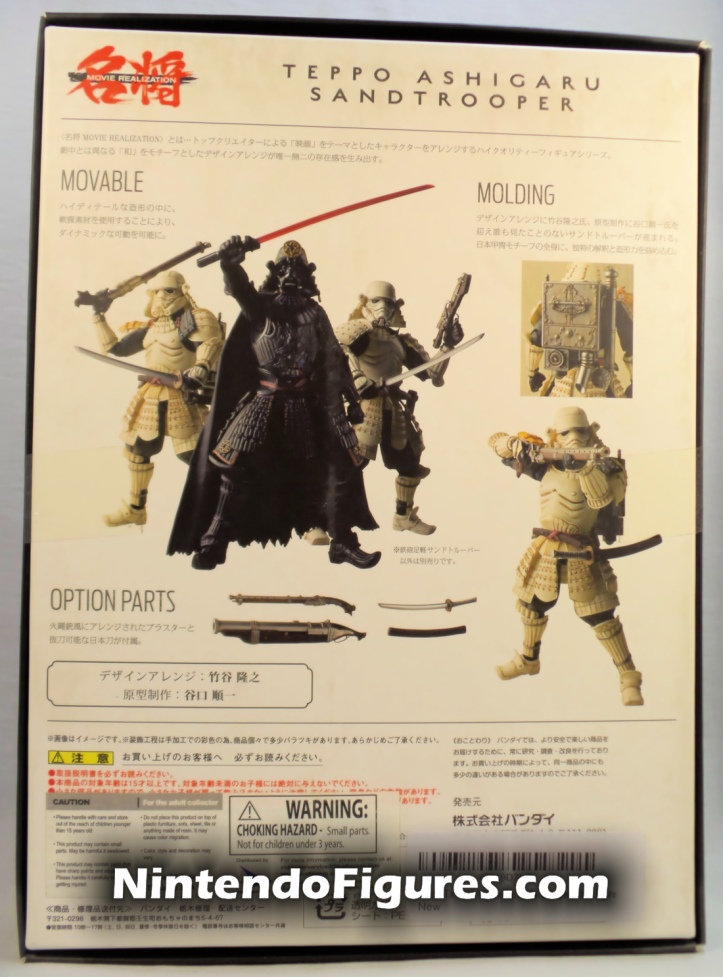 Paint and Sculpted Details – One of the reasons I’ve always been drawn to this figure line and wanted this figure is the level of detail is incredible.  Maybe it is the lighter color of the armor, but I think this figure has even better detail than Darth Vader.  Every piece of armor has some kind of sculpted detail and many places also have a nice light brown wash to make them stand out even more.  There are tons of other little details on the figure as well like a short blade and sheath (which is just for looks and cannot be used as an accessory) across his waist.  The helmet captures that menacing Stormtrooper design but still looks like a samurai helmet which is exactly what these figures are about.  You also have the yellow shoulder-piece which is a connection to the Sandtroopers in A New Hope which don an orange, shoulder piece.  And finally, I don’t want to forget the awesome sand-blasted color of the armor!  This guy really looks like he has been out in a desert for a while and the color helps him stand out among other Star Wars figures.  The level of detail and the quality of the paint application is truly outstanding on the Sandtrooper.

Accessories – One area where Bandai has improved since Darth Vader began this figure line is the amount of accessories that come with the figure.  We get a total of eight hands and we need each one for reasons you will see very soon.  I will say that unlike the Darth Vader where the hands popped into place in the arms really well, I had to warm up the ball peg with water to get some of the hands to fit.  This is a minor annoyance and something to be aware of if you buy it.

One accessory that I think looks fantastic and really fleshes out the figure is the backpack.  I’ve seen other reviewers call it a “steampunk” look and I think it certainly looks as if it comes from that genre of book/move/tv show, but I think the backpack has a distinctive Japanese style as well.  The backpack has all of the excellent details that the figure has including the wash and sculpted details.  It does rotate around quite a bit when you pose the figure but this is not an issue as it can easily be fixed when you get the arms and legs the way you want. 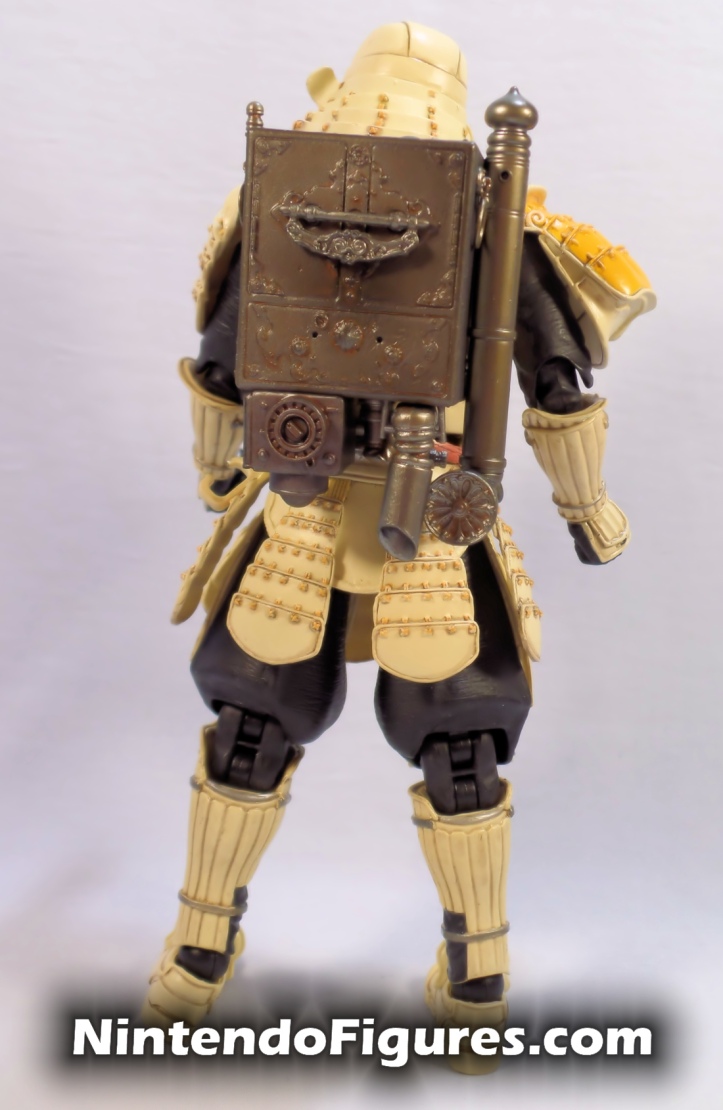 While I was initially excited to get some guns with this figure, I ended up liking the sword accessory best.  It seems to me like this figure was designed to be posed with the sword.  Not only does it capture that samurai feel but the articulation works well with melee poses.  My only concern is that much like Vader, the hand grips the sword tightly and putting this sword in the Sandtrooper’s hand and later removing it feels like it will inevitably cause paint wear over the course of time.  I plan on either leaving this guy equipped with this sword or leaving the sword in this hand to help prevent that from happening. 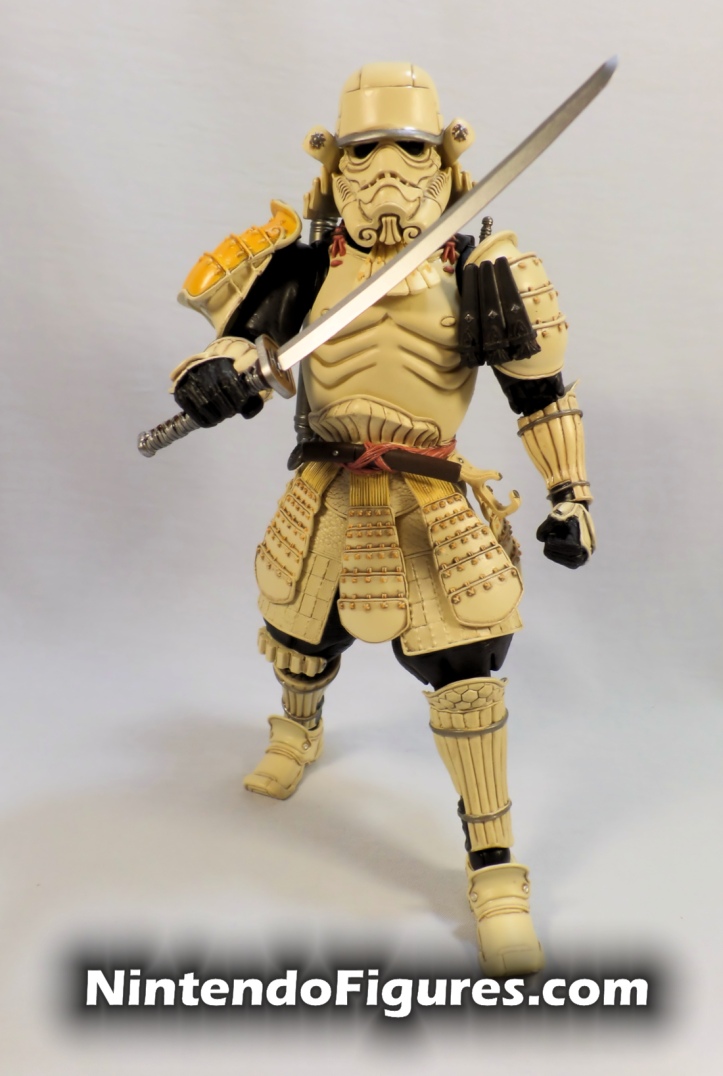 One of the other things I really like about the sword is that the Sandtrooper comes with a sheath too.  In samurai movies, there is often an awesome standoff before the sword fight that takes place just like how cowboys draw their weapons in Westerns.  While it isn’t really easy to pose the figure with the sheath, the picture below really looks awesome and is why I like the sheath a lot.

One of the things I was most curious about were the big guns that this figure comes with.  Both the rifle and the cannon (this is kind of Japanese weapon and I unfortunately do not know its real name so I will be calling it a cannon in the review) are long and not as easy to pose with the Sandtrooper as I hoped.  I have a couple of nice pictures scattered throughout this part of the review but none of these were as easy to achieve and took some patience and persistence.

Fortunately, both weapons do look nice and Tamashii Nations did an awesome job making the guns look weathered enough that they look as if they’ve seen some combat.  The flintlock on the gun is movable as well which is totally unnecessary but it is a nice little extra touch.  These guns do not look or feel Star Wars but they are a blend of samurai and Star Wars. 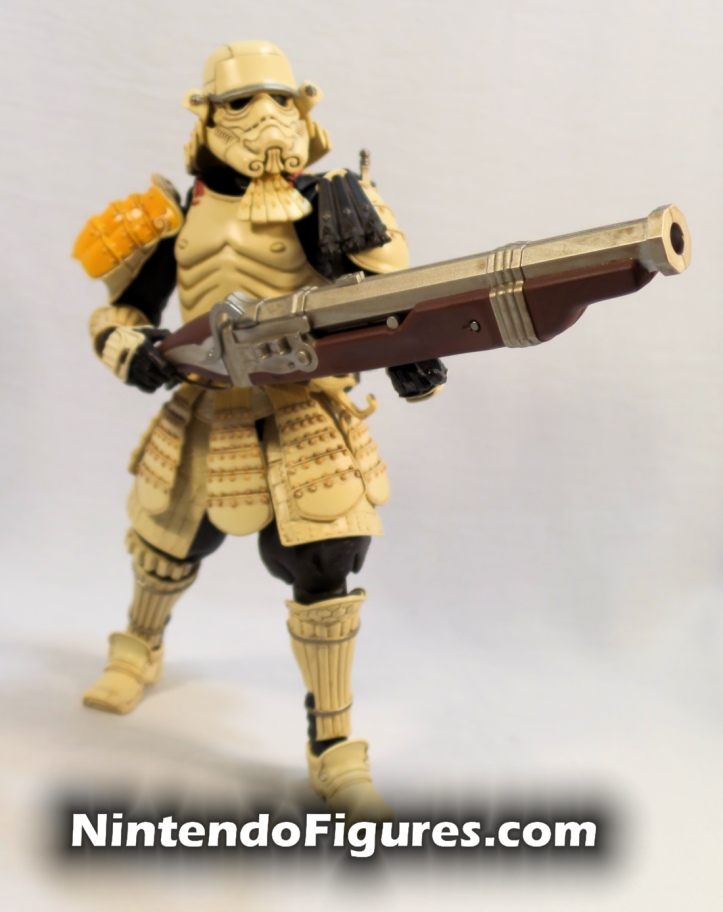 Articulation – I had high expectations for this figure because Darth Vader set the bar so high and unfortunately, there are some limitations with the Sandtrooper.  The first thing that happened was really surprising.  My right leg popped off several times while posing the figure.  This is not uncommon with Bandai’s other Star Wars line, Figuarts but I was definitely surprised and disappointed to see it happen on a $90 figure!  Fortunately, it does pop back into place easily.  With this exception, the articulation is good and matches what Vader can do.  It isn’t easy or fun to achieve many different poses with the guns (partially because the guns are so long and hard to hold with the hands) which I wasn’t really expecting and I think may disappoint some people who get this figure.

Closing Thoughts – One thing that is certainly true about these Movie Realization figures is that the more you have, the cooler they look!  The Sandtrooper looks amazing next to Darth Vader and I’m still really enjoying this line.  The added accessories and the paint and sculpting work on this figure are both top-notch.  The articulation has a few limitations but this is one of the few drawbacks.  There are so many cool ways you can display this figure that I know it will be a highlight in my collection for many years to come.  If you like Star Wars and are looking for something different or you love samurai and a Japanese aesthetic, then these figures are highly recommended!