The wait between Detective Pikachu and the Zelda Amiibo has been a long one but he is finally here and it is exciting to have a new Amiibo to review!  Detective Pikachu is not only a unique video game but Nintendo made the interesting choice to create the largest plastic Amiibo yet.  Does the increased size make this a better product or would a normal sized Amiibo have been better?  Let’s take a closer look and find out! 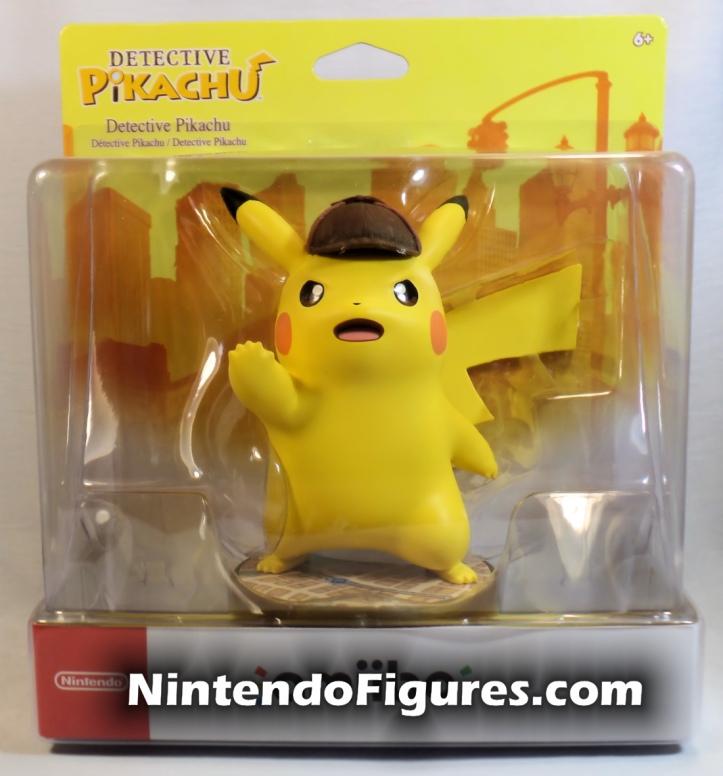 Packaging – With a larger Amiibo comes a bigger box!  The artwork is fairly nice on this Amiibo but not among Nintendo’s best.  The cityscape matches the game very well but doesn’t grab your attention, especially compared to other Amiibo box art.  The yellow and orange compliments Pikachu but again, isn’t quite as eye-catching as other Amiibo.  That isn’t to say it doesn’t look good, it definitely does, but I had no qualms about opening this Amiibo up like I have had with other releases.

Price and Rarity – Before we get into the figure itself, I do want to acknowledge that this does cost $30 in the US which is quite expensive.  As will be discussed later, this Amiibo is double the size of your standard one so the price doesn’t feel completely out of whack but at the same time, if you’re on a budget or don’t love Pikachu then this would be an Amiibo that is easy to skip.

As far as rarity goes, my impression is that in the US, this shouldn’t be too hard to track down over the next week or two after release.  I ordered one from my local Best Buy the morning of the release and every Best Buy near me had some Amiibo available for purchase online.  When I went to the store after work, Best Buy had several still on the shelves so I think it is reasonable to think that this Amiibo will be on store shelves for a few weeks without needing a restock. 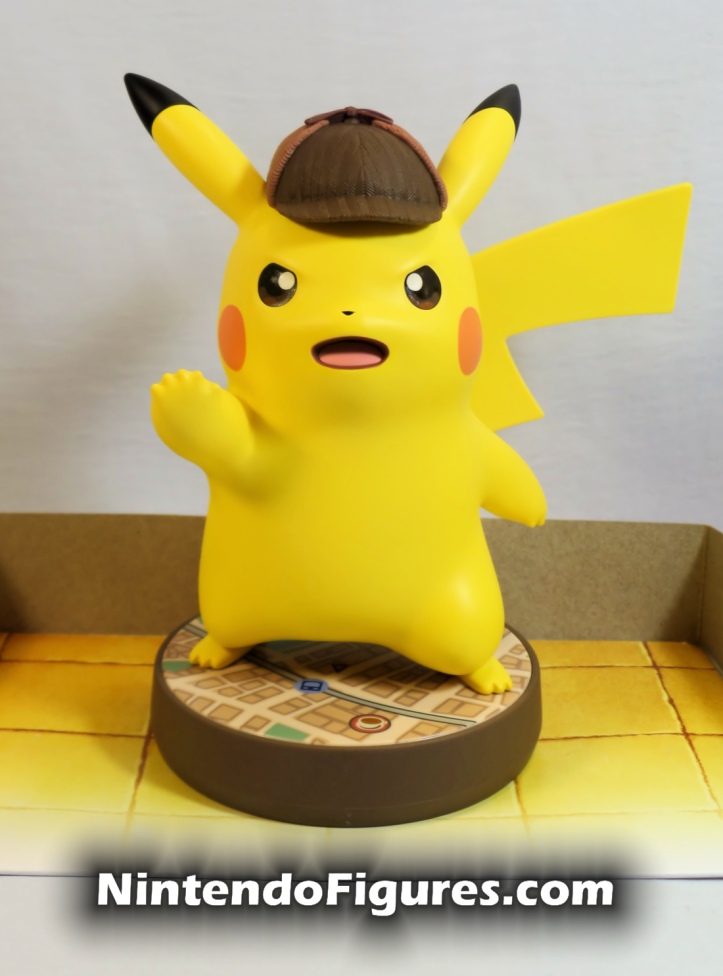 Pose – Pikachu is one of those characters that has a pretty simple character design so it is not realistic to think this Amiibo is going to have a super dynamic pose like we saw with some of the Smash Brothers Amiibo.  When you consider the fact that Detective Pikachu is an investigation game as well, the pose of this Amiibo makes perfect sense.  Detective Pikachu looks like he is on the trail and about to interrogate someone.  While this isn’t as exciting as other Amiibo that have been released, it looks good and it fits the character and game so it is hard to be too critical of Detective Pikachu in this regard. 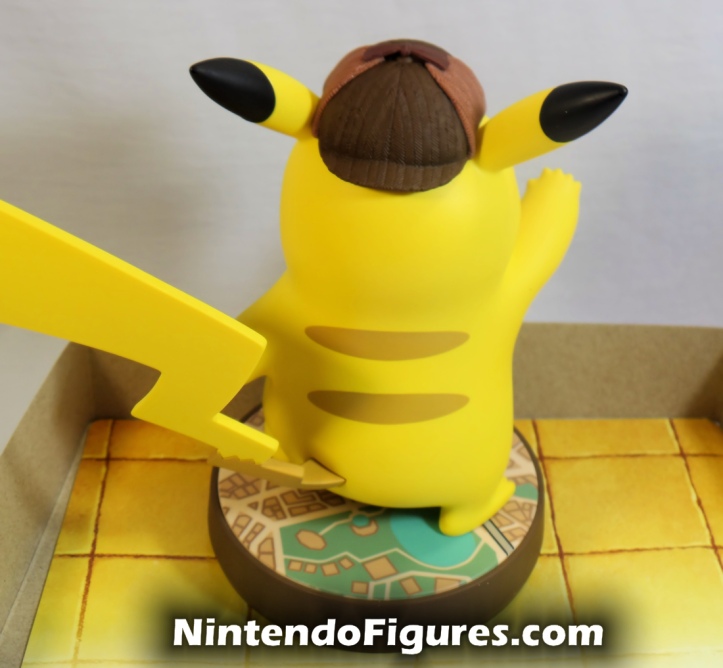 Paint and Details – The simplicity of Pikachu’s design does impact the level of detail as well.  Fortunately, Nintendo found some creative ways to add visual flair to Detective Pikachu.  First off, his face looks great from the stickers on the eyes to the sculpted detail on the mouth.  The hat is also excellent with textured detail in the plastic that makes it look like it is really made from fabric.  Nintendo tried to make this Pikachu look like it could come straight out of the game and they succeeded.  Perhaps the coolest part of all is the base which looks like a vintage map and helps bring to life the idea that Pikachu is on the case.  I really appreciate that Nintendo keeps coming up with new base designs and this one isn’t flashy but it matches the game exceptionally well.  Overall, Detective Pikachu has some nice details and if you don’t have the Smash Brothers Pikachu, I would recommend this one because it has a slightly more interesting design while still maintaining Pikachu’s cuteness. 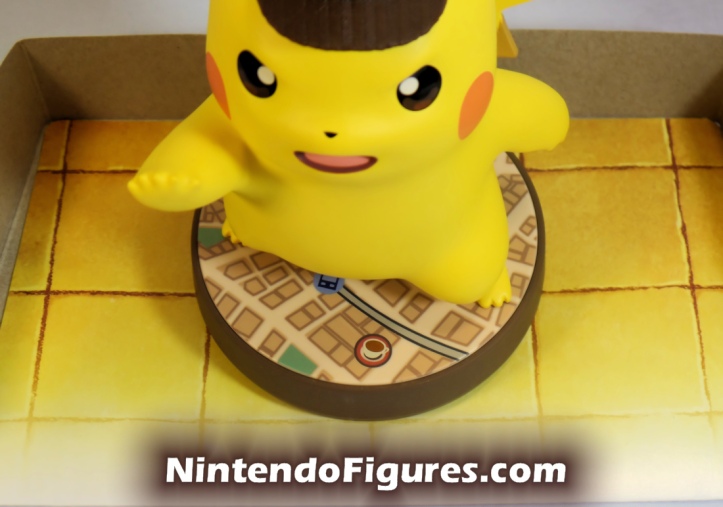 Size Comparison – Speaking of Smash Brothers Pikachu, here is a look at the size difference of the two.  Overall, Detective Pikachu is not only bigger but wider.  In that sense, I do think the price hike is justified and worth it to Nintendo fans and collectors.  I don’t want every Amiibo to be this large (or expensive) but when it is used wisely, I think it does look really cool and makes this Amiibo more display-worthy too. 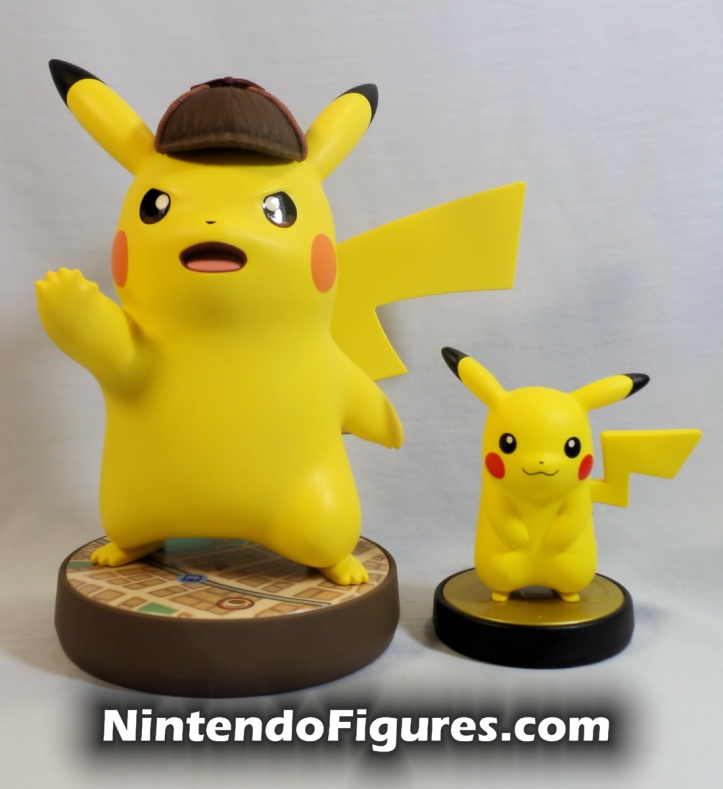 Functionality – I have not purchased Detective Pikachu and am not sure if it is a game I will play or not but the Amiibo has an interesting use in the game.  It lets you see Pikachu say or do things each time you scan it which I would think are cute and entertaining.  Whether this is worth buying the Amiibo for, I can’t really say.  I think it would appeal strongly to kids or people who think Pikachu is adorable but $30 seems like a steep price for what you get in the video game.  I would recommend buying this Amiibo if you like the figure and then the functionality on your 3DS is a nice bonus. 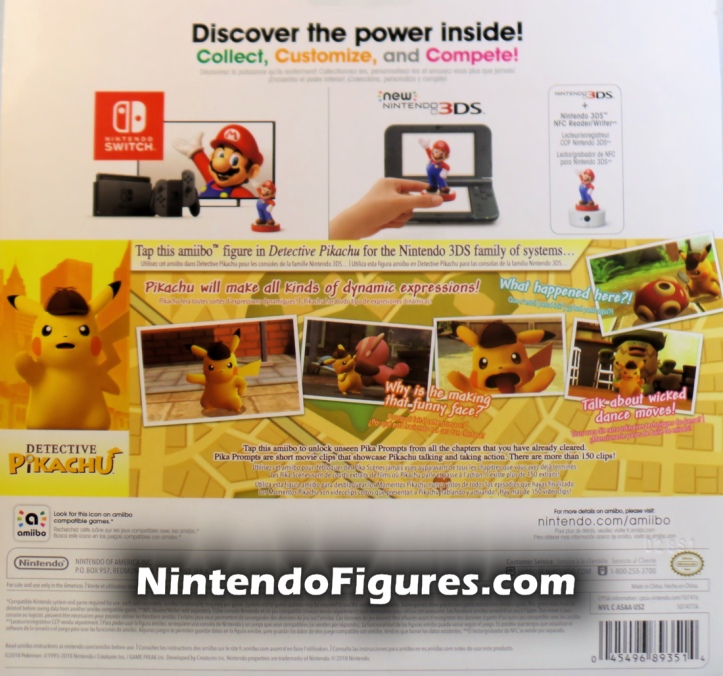 Closing Thoughts – Before I bought this Amiibo, I wasn’t too excited about owning it.  I didn’t find the idea of playing Pikachu as a detective to be that appealing either.  It seemed kind of silly and gimmicky to me.  With that said, the Amiibo has certainly won me over and now I would consider playing the game.  Part of that is the charm of the Amiibo and part of that is a genuine curiosity after reviewing it to see what it can do.  Detective Pikachu is not the coolest looking Amiibo or the cutest but it definitely has its charms.  Ultimately, I think it is worth the price to many Nintendo fans and I’d recommend it if you’re at all curious or find it cute when you see it in stores.

Those are my thoughts on Detective Pikachu, what do you think of this new Amiibo?  Let us know in the comments below!