Kirby is an interesting franchise because its cuteness and the relatively low difficulty of the video games make it hard to know who the biggest audience is.  Is it your typical Nintendo fan or is it more younger fans who the games obviously appeal to?  While some people look down upon the games or do not enjoy them, the people who do enjoy Kirby can’t get enough of the charm or the different powers.  Kirby is undoubtedly one of the most versatile characters in video game history since he can eat and transform into almost anything.  This has given fans of Kirby a lot of figure ideas and fortunately, if you are a Kirby fan, there are quite a few options for you.  While one day I may cover other main characters from Kirby like Meta Knight and King Dedede, this guide will focus solely on Kirby because he is so well-represented in figure form.  As always, a Figure Buying Guide is forever a work in progress and while I try to update them each every few months or at least annually, there may be mistakes here and there or a new product that needs to be added.  If you see anything like this, please let me know in the comments section below. 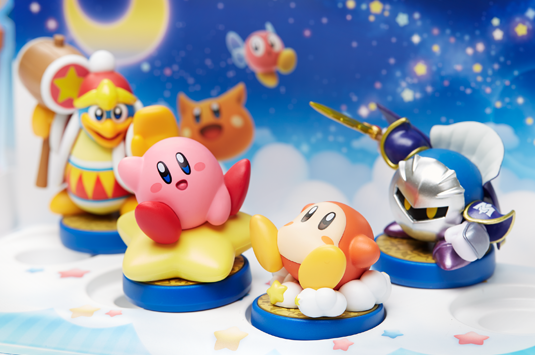 Amiibo – As with some of the other figure guides, the first place to look for economic buying options are Amiibo.  Considering Nintendo makes Amiibo and Kirby is one of their bigger franchises, you would expect there to be a wide range of figures but there are actually only two.

Smash Brothers – The Smash Brothers Kirby Amiibo is quite old now and while simple in design, it captures Kirby’s cuteness well.  This Amiibo was common but is harder to find in stores now because of its age.  On Ebay, the prices range from $15-$25 new in box.  Even an opened Kirby Amiibo can be near $15 at the time of writing so this figure is not quite as  cheap or as easy to get as it used it to be.

Kirby Series – Paired with the release of Kirby: Planet Robobot, Kirby received a new Amiibo only this time riding the iconic Warp Star.  While the pose is relatively similar to the Smash Brothers Amiibo, it does seem like you get a bit more bang for your buck with this figure.  Since this figure was released more recently, it is cheaper and more readily available at retailers and online.  You should be able to pick this up for retail price ($13) and it is possible that it may even go on clearance at some retailers if recent Amiibo releases like the Animal Crossing series are any indication.

Surprisingly, these are the only two Kirby Figures I have been able to find that are out in the United States.  This means we need to look in other places to find other Kirby figure options. 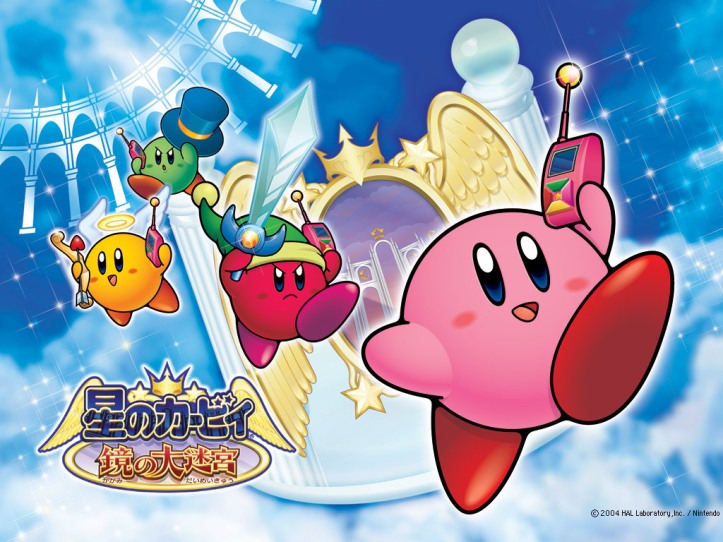 Japanese Releases –Kirby has been franchised heavily in Japan.  If you go to a Japanese site like amiami.com and search Kirby, you might be surprised at how many different Kirby items (including things like glasses and stationary) have been made.  As always with Japanese stuff, there tends to be a premium price you have to pay, especially if the item has sold well or is popular.

Kirby Nendoroid – If you’re looking for a high-quality figure of Kirby with a number of display options then this figure deserves your consideration.  Nendoroids usually provide a lot of value for the $40-50 price tag.  Kirby is no exception and comes with Sword and Fire powers along with other accessories.  There is a Good Smile Exclusive version of this Nendoroid that comes with a Maxim Tomato but keep in mind that because these figures are a limited edition and Good Smile has expensive shipping they are usually more valuable than a regular Nendoroid (and harder to buy too). 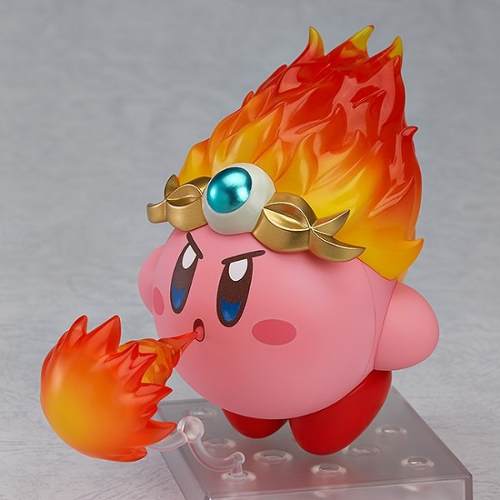 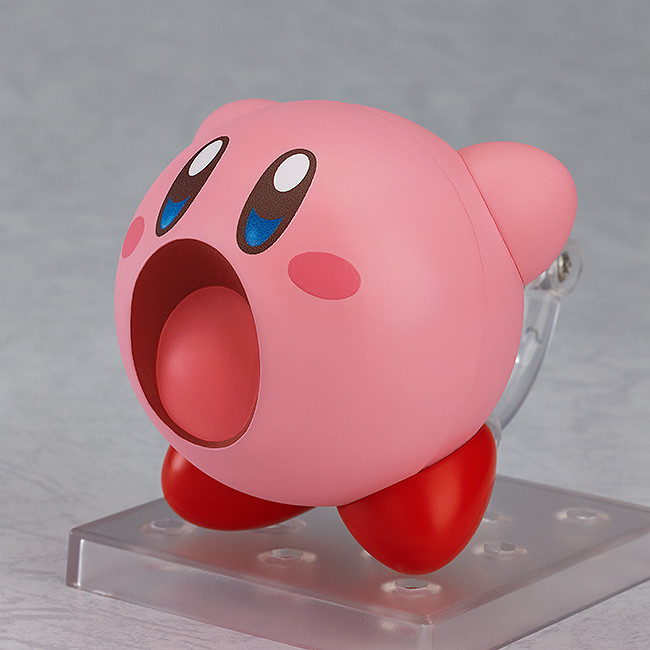 Ensky Tsumu Tsumu Kirby Figure Set – Perhaps one of the best budget items out of Japan is this set of stackable Kirby figures.  Tying into Kirby Mass Attack, Ensky released this set of 10 Kirby’s and Warp Star who can stack on top of each other in different ways to make a nice miniature display as you can see on the box art below.  Perfect for a desk or any other small space.  With a price on Ebay starting around $25, this is an affordable and pretty cool item for any Kirby fan.

Tomy Takara Kirby Desktop Helper Collection – First off, the name of this item is translated from Japanese a couple of different ways including “Kirby Stars of the Chore”, which in addition to being funny is something nobody would think to search for so it.  If you want fewer Kirby’s and a few more supporting characters then this set of small figures might be what you’re looking for to display on a desk.  What is cute and clever about this set is that the figures are actually designed to help store things on your desk.  For example, Kirby and Waddle Dee will hold your nametag at work and the Warp Star can become a place to store paper clips.  What it lacks in practical value, it makes up for in cuteness.  While not many of these sets are available on Ebay, they are priced around $25 which seems fairly priced for an item that has to be sent directly from Japan.

Gashapon Sets – Not unlike Blind Boxes which are very popular in the US lately, Gashapon sets are small figures that can be obtained in several different ways in Japan.  I have seen them in crane games and other similar machines though it is usually not difficult to find whole sets available on Ebay.  I am not an expert on these and it can be tough to find information as a Gashapon gets older and starts to disappear from Ebay so I’ll list some of the Gashapon sets I can find and if you know of others and have pictures, please let me know and I’ll be happy to add them to the guide.

Tomy Takara Kirby Return to Dreamland Gashapon Figure Set – While it is not uncommon to see Gashapon sets that have figures we may never see a full-sized version of, that is especially true with this set based on Kirby Return to Dreamland.  The quality of these promo pictures looks excellent and hopefully the quality is just as high with the real thing.  While there are very, very few of these for sale on Ebay, currently they go for around $50 a set.

Tomy Takara Kirby Metal Gashapon Figure Set – This is a very unusual set.  There are sixteen figures to get with eight in silver and eight in gold.  The metallic paint is odd since Kirby has never had a power with a metallic appearance but if nothing else, it makes these stick out from your standard Gashapon figures.  There is also an excellent range of Kirby powers here that is sure to please any fan.  Unfortunately, I do not know if one set is rarer than the other (you would think that the gold ones are harder to get) but it seems like the silver and gold sets are being sold for the same amount on Ebay.  While there are only a few available, the complete set can be purchased for roughly $50.

Kirby Keychains – In Japan, anything cute can turn into a keychain and so who better than Kirby?  While not a figure per say, Kirby has somewhat limited figure options and these can be affordably priced if you check Ebay frequently enough.  Best of all, it would appear that most powers and characters are represented in keychain form so for that reason alone, these are worth considering.  I suspect there are a ton of different keychain series that have been released and since I can’t gather enough information to try and represent them all, I will include some pictures of some of the series below.  If you have any additional information about releases, please let me know and I will be happy to expand this part of the guide. 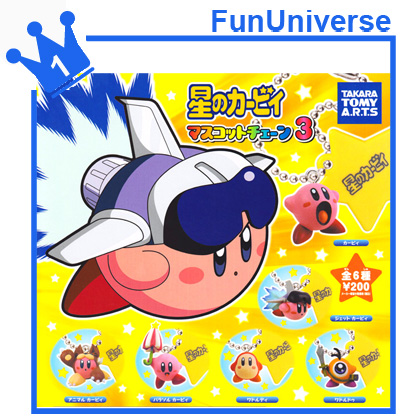 Kirby Plushies – If Kirby works well with keychains then he absolutely belongs in plushie form.  What is nice is the plushie maker can take a basic Kirby and adapt it to many different powers which makes fans happy.  As I said in my recent Pikmin Figure Guide, I do not collect plushies and I know very little about them.  A quick search on Ebay and you will be overwhelmed by how many are out there and all the options that you have.  There are a lot of plushies from China on Ebay and I would caution against buying those if you want to get any kind of return on your investment down the road.  Nintendo collectors almost always want the real thing and something mass-produced and not officially licensed will not hold its value as well.

High-End/Premium Kirby Figures – Perhaps it is because Kirby appeals to a younger demographic and they don’t have the buying power that adults do, but regardless of the cause, there are limited options for those who want to get the highest quality Kirby figure. 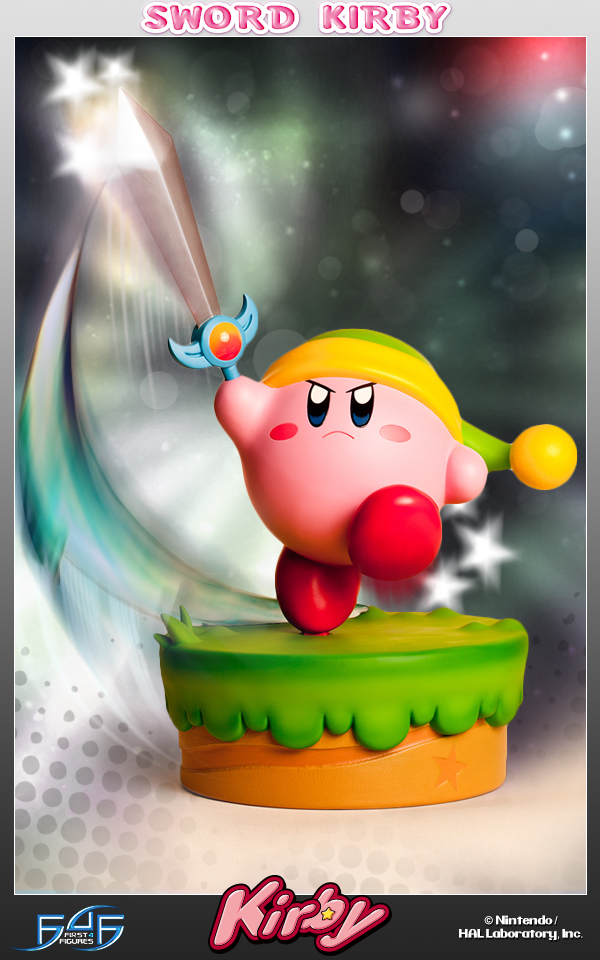 Sword Kirby Statue – First 4 Figures has long been the sole maker of Nintendo statues and more recently they have started to create Kirby statues.  The first release is this Sword Kirby statue which comes in two versions.  Regular and Exclusive.  As usual First 4 Figures, the Exclusive version lights up and costs a little bit extra.  The Regular version of Sword Kirby is limited to 2000 made and the Exclusive version is 850.  Their retail price is $220 and $240 respectively.  There are still some of these floating around for a fair price online so if you’re interested in taking home a high-end figure, you may not want to wait too long. 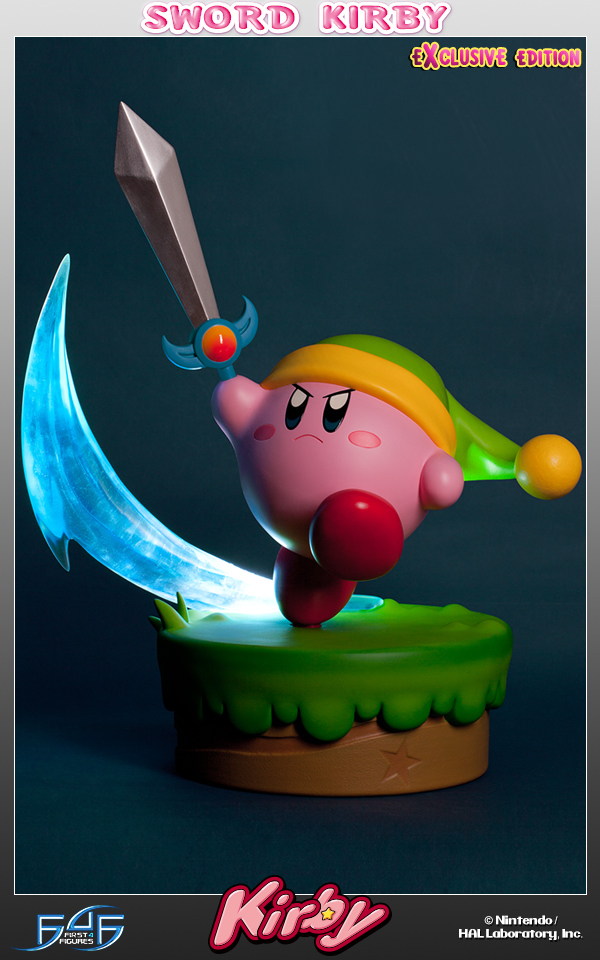 Tomy Takara Magnetic Kirby Model Figures – Made in 2002 and 2004, these figures are some of the rarest of all Kirby merchandise.  Surprisingly, these are based on the Japanese TV show we know as Kirby Right Back At Ya!  While relatively small, they usually go for around $100+ each on Ebay.  Unfortunately, it is hard to find images of these figures when completed but they appear to be pretty high quality.  I’m not sure how poseable they are but for some of these powers like Needle Kirby, this is absolutely the nicest figure you will get.  If you’re looking for these figures, be patient on Ebay and wait for a decent deal.  It is hard to imagine these becoming more expensive in the future but with how popular Kirby is, you really never know.

The options for Kirby are certainly much more limited in the United States than for Mario or Zelda but I believe with time this may change.  Kirby has always had a solid fanbase and it will continue to grow in the future.  If you like any of the Japanese items you see here but have trouble finding them, keep in mind that almost all Nintendo figure lines coincide in some way with a video game release and as new games come out, new figures will also be made.  The best time to buy them is around the first year or two when the figures come out so that supply is high and prices are usually low or as low as they will get.  As time goes on and supply dwindles, what were initially affordable items suddenly become expensive even to collectors.

I really enjoyed writing this guide and I hope you find it useful for your next Kirby purchase.  If you have any information on things that should be added to this guide or if there are any corrections that need to be made, please let me know in the comments below.  At the same time, if you have any questions for Nintendo collectors please let us know and either myself or others will hopefully be able to respond and help out!